Taking a break from a riveting and fun 4-box break of Upper Deck 'Pieces of History' over on Thorzul's blog I decided to post the second of three box breaks I did of Upper Deck's 2009-10 offering of Champ's Hockey. My first box break of this product went quite well and I was pleased with the results. This box managed to overshadow the first with some nice hits and some unannounced hits as well. Before I refresh you on the insert ratios we need to put a quarter in the jukebox.


Okay, with that out of the way here's how the box broke.

If you read my first post then you know my feelings on this set. The way the cards are designed and coloured make the veteran stars card fit right in along side the current stars. Upper Deck has always dome justice to practically every hockey release they have done. With the recent news circulating around the hobby about the potential serious troubles that Upper Deck is having it would truly be a loss if their hockey product suffered the same fate as their others.

Here is an example of what I mean, Patrick Kane side by side with Al McInnis, Terry O'Reilly, Mr.Hockey and Red Kelly. The cards compliment each other and none of them looks out of place in this retro-themed set. 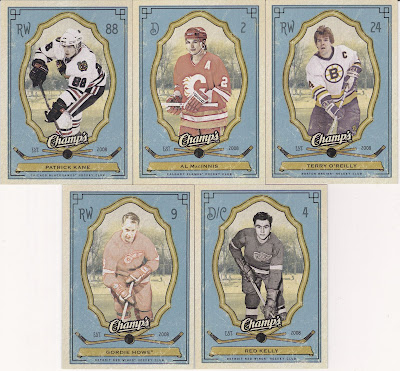 I pulled the requisite number of Green bordered cards from this box. The players I got were Marty Turco, Ryan Kesler, Bobby Orr, Zach Parise and Pekka Rinne. 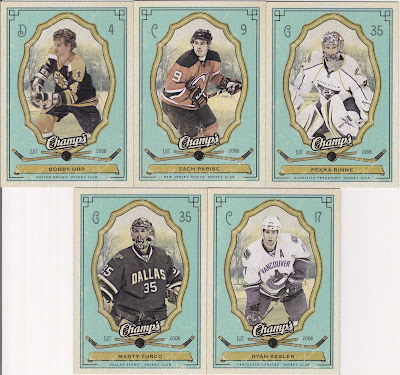 Next in order are the Red bordered parallel cards which I have decided to torture myself into collecting. I think these are the nicest looking cards out of all the parallels and the insert ratio, coupled with the low number of base cards, make this an excellent chase in my mind. The two I pulled from this box were Marc-Andre Fleury and Patrick Kane. 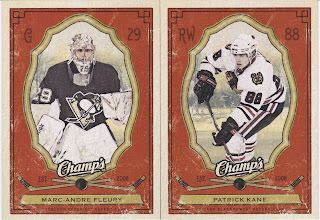 The Yellow bordered card from this box was Bobby Ryan. The more I look at these cards the more I want to dub them the "Mountain Dew" parallel. They are not really yellow as they they are more neon lime green.

From the Natural History Collection I got a Sharp-Tailed Grouse, Dawson's Caribou, Edmontonia Longiceps, Orodromeus and a Pitcher Plant. 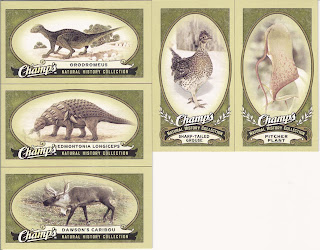 The one-per-box 'Wonders of the World' that I got was of Chichen Itza. I like this set and I like the subjects presented. It looks as though this portion of the set though is going to take the longest. Ugh!!

Now we move on to the "hits" portion of the box. As we do, Alice is serenading a "fortunate victim".

There were 5 hits this time around with one of them being, as I said before, one of the unadvertised hits in the Champ's product. The two jersey cards I pulled were perhaps the two best ones that you could hope for in this product. I pulled a Sidney Crosby black swatch jersey card and an Alexander Ovechkin red swatch jersey card. I have seen quite a few of the Sidneys on eBay but have mostly seen white swatch Ovechkin cards so I was quite happy to get the red version. 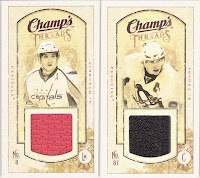 The autograph card I received belonged to Nathan Gerbe from the Buffalo Sabres. Nathan played a whopping 10 games for Buffalo and it looks as though his penmanship is about as good as his game. Note to Upper Deck, keep the scribbling scrubs OUT of product you want taken seriously.

Lastly the mini coloured back variant I pulled was a red back of none other than Mr. Hockey himself Gordie Howe. Great card to get, especially with Sid and Ovie jerseys. 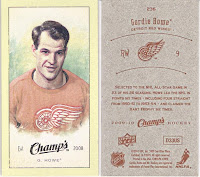 The last hit of the box is one of the card I mention in an earlier post. Upper Deck released 'The Champions' series in their flagship Hockey Series 2 product and there were several women's hockey team cards that were autographed. In Champ's it looks as though they have released autographed versions of the other cards. I received my first figure skating autograph of Denis Petukhov. Luckily, having watched the Winter Olympics I had at least some idea as to who he was. 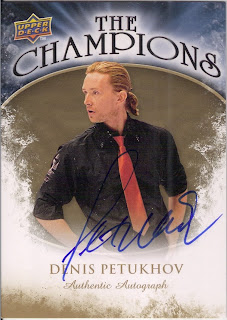 Overall this box was a very fun break and I am happy with what was pulled. There was still the issue of several mis-cut minis and a couple of the full size base cards had dinged corners. The useless scrub autograph is something that you just have to accept nowadays, but I would still welcome tougher seeding odds if the names were more recognisable.

Out of two boxes I have managed 67 of the 100 base cards. Not a bad collation but not incredibly awesome either. I have one more box to break and I should hope it gets me close to, if not even, finished the 100 card set. Between Topps T-206 baseball and Champ's hockey I am getting addicted to collecting mini cards. I am afraid when A&G comes out that this will explode in to a full blown obsession.

Thanks for coming back here and taking the time reading what I post. As always, if you are collecting the Champ's set and want to trade some of your stuff for my stuff please contact me and we will work something out. I am off to San Diego for a vacation but hopefully I will bust and post the third box in this series before then.

Until then, play us home Alice!!

P.S - If you are so inclined and enjoy "concept" videos. There is a much longer mini movie from 'Along Came a Spider' (this song was cut from it) and you can click here to view it.