Mail Day (aka drew comes threw aka Waiter, there's a relic in my serial)

A while ago drewscards contacted me about some 2010 Topps insert cards I had collecting dust and let me know they would be better appreciated in his neck of the woods. Happily I packed them away and got them off of my desk. A little while later a return package was in my mail box with a personalized "thank-you" letter and some much appreciated cardboard.

First thing out of the envelope was a handful of 2010 base cards that brought my want list that much closer to conclusion. Also included was my first Target "retro" variation of the 2010 set featuring a sorely missed Roy Halliday in all his AL ERA leader card goodness. These cards are really, really cool and if anyone else can help with my pursuit of Cubs and Jays please send me a note. 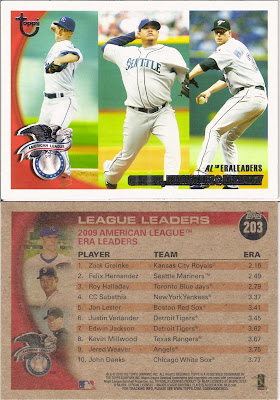 Next out of the envelope were two serial numbered cards. The first is from a set that I have seen several cards from but I believe this may be the very first one I own. From the Upper Deck 2008 Baseball Heroes set #'d/199 is a blue Alfonso Soriano 40-40 Club card. As I said, I have seen several cards from this set and I may just have to search out some packs or get lucky enough to find a box and break some for myself. 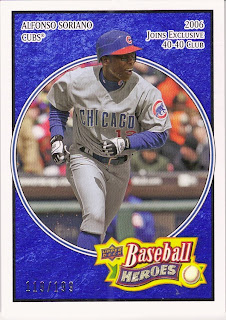 The second serial numbered card is from Upper Deck's 'A Piece of History' release. I have ripped several packs of this stuff and I am truly a fan of it. So much so that I jumped at the chance to get in on a 4-box break of the stuff on Thorzul's blog. Drew sent along a Vernon Wells numbered out of 25. The blue on this card is striking as well, especially with the marble frame of the picture. 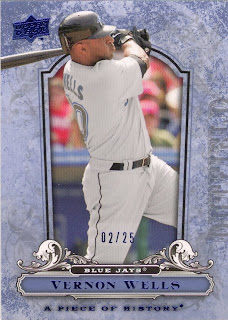 Lastly, the card I was most happy with getting is one that I had lost out on a few times on eBay. It also finished off my relic collection of the Chicago Cubs from the '09 Allen & Ginter set. I received the Alfonso Soriano framed mini relic bat card....... 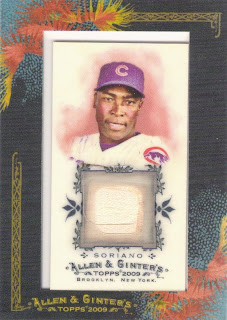 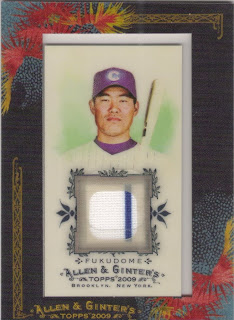 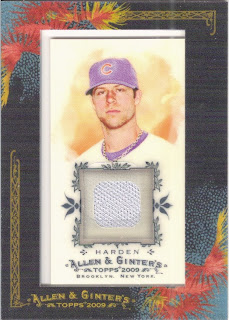 All I have left to get now is the plain white swatch variation of the Fukudome card.

Thanks again to drewscards for the trade, you have made this Cub fan very happy. I hope you complete the insert sets you are chasing and I am glad I could help out a fellow collector. This is what it is all about folks!!