After being glued to YouTube and Thorzul's blog for the last couple days awaiting the latest upload from the 4-box break of 2009 Upper Deck 'A Piece of History' there was a pattern emerging that needed to be put to the test.

In the early 1990's when inserts began to be used as a marketing tool to promote the base product card, certain card manufacturers neglected to think through the whole process and simply packed each box with the requisite number of inserts. These inserts were always packed in the same spot in the box. Those who discovered this usually kept the information to themselves and went to town on a freshly opened box of packs at their local hobby store.

This is not a rant on pack searchers and I have already digressed from the purpose of this post enough.

What has become noticeable through Thorzul's breaks is that the 'A Piece of Hollywood' memorabilia cards in the 2009 edition of APoH appear to have sunk to the bottom of the box. I decided to put this to the test and stopped by one of the card shops that I know had some of this on the shelves. Among some other packs I purchased I went to the APoH box and grabbed the two bottom packs. 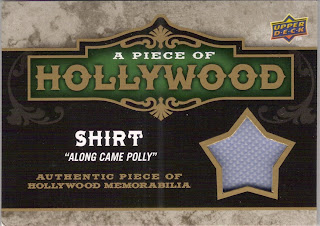 If you have a chance to stop by your LCS and they have this stuff out, give it a try. I am tempted to say this is the way these relics are packed with this product. I am going to watch a few more box breaks and see if they happen the same. If this proves to be a sound theory it might not be a bad idea to let the owners know if they are going to open a box to sell for packs they may want to "shuffle the deck", so to speak.

In the end an even playing field for all is best, I think.