Saturday at the LCS

This Saturday provided me with one of the rare opportunities to devote a substantial amount of time to soring out my collection and cataloguing a few more things that have come out of storage. Of course, it also afforded me an opportunity to visit my local card store as well. Usually I limit visits to during the week and they only last long enough to grab a few random packs and place orders for future product. Today I actually had a chance to thumb through several shoeboxes of singles and the ever-present $1 box, chat with the owner and customers about collecting and basically just hang out.

Armed with a couple wantlists for some of the sets I am working on I wound up with a large number of singles to sort out later. Some of the other, more interesting bounty worth sharing that I came home with helped get me closer to completing some insert sets and started me working on a few more collections.

Having decided not to bother with 2010 Topps Heritage this year has made building the insert sets a bit more difficult to say the least, but I still managed to pick up a few. Three 'Baseball Flashback' inserts featuring Luis Aparicio, Warren Spahn and Roger Maris. Two 'Then & Now' inserts featuring Roger Maris/Albert Pujols and Luis Aparicio/Jacoby Ellsbury and 1 'News Flashback' insert featuring Mohammed Hassan II. 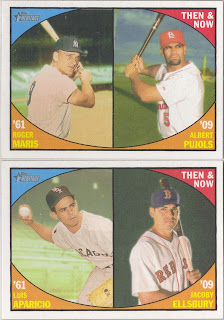 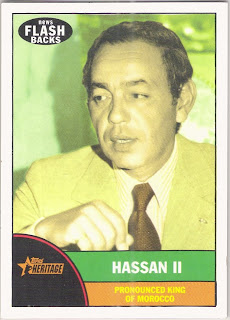 I also picked up 4 of 10 base set cards that will make a nice stand alone sub-set. Cards #'d 401-410 parallel the 'Baseball Thrills' cards from the original '61 set. However, three of the cards' subjects differ from the original set, the others are the same except the Mantle (card #406) is featured with a different photo. Here are the four I picked up today paired with their 1961 counterparts. 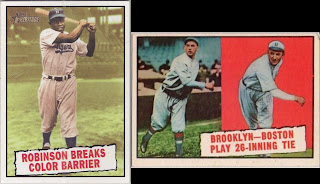 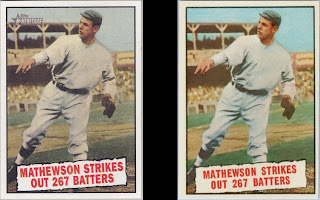 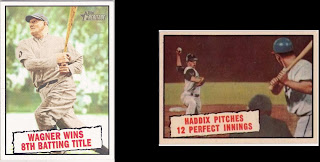 Either way it matters to me very little, the only card that might have been better to have in the set was Larsen's Perfect Game but in the end it is still a cool looking page of cards when finished. Hopefully someday I will put together the 1961 set of these 10 cards as well. The last Heritage purchase was a chrome Adam Lind card to go towards this years crop of Blue Jays I will be collecting. 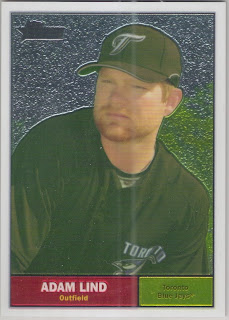 Amongst a handful of base cards for Topps Series 1 I snagged a few inserts too, including a gracious and welcoming Derrek Lee, a card I was never lucky enough to own in the first place let alone risk my mother throwing it out, and a card commemorating THE event in Baseball Card History.

While searching through several unmarked shoeboxes of cards I came across some 2009-10 Upper Deck Champs Hockey minis. When this set first came out it was still fairly early on in my return to collecting and so my sights were set more on reacquainting myself with the hobby and trying not to get overwhelmed by too much product. I ignored this release at the time but some of the sub-set cards were interesting. I found these five cards and decided to try and eventually find the rest. 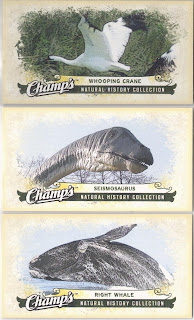 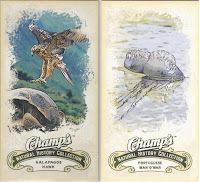 I wanted to make sure that before I left I would take a trip through the dollar box. Seeing the success that some of the other bloggers have had with "bargain bin" cards I had the itch now. Nothing really amazing to find but a few cards that peaked my interest came home with me. I have gathered a few of the 'Topps 50th Anniversary' Reprints from several sources and added a couple more here. 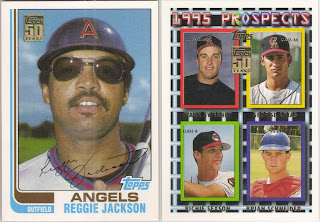 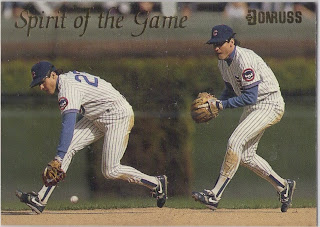 The Ryne Sandberg 'Spirit of the Game' was just to fill a hole in that player collection. The Heritage mini red-back and the T-205 mini were the first pick-up in what will, more than likely, become a bigger collection someday.

All things considered it felt really good to be able to hang out in the card store and get back to one of the aspects of collecting that makes it fun for me. When you get to gather with other collectors, talk about your collection and listen to others talk about theirs, it reinforces why you do this in the first place. Hopefully I can start to make these Saturday visits a regular occurrence, it sure does the soul some good.