A long while back I had posted a three box break of 2009 Topps T-206 100th Anniversary baseball and Brian from 'Play at the Plate' expressed interest in one of the Cycle minis I pulled even though it was badly mis-cut. Having vowed not to make that card a part of any trade, we worked out a deal to help each other with some of the base set singles as well as a mish-mash of whatever else we collected. Today I beheld a beautiful sight when I walked through the door after another long day at work.

I have said it before and will say it again, nothing chases the blues away like a stuffed envelope sitting at the door when you come home.

The very first thing that greeted me when I opened it was this handful of minis that will quickly be added to the set I am working to complete. Over 50% of the way there. 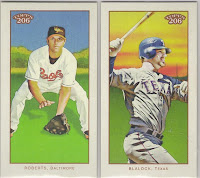 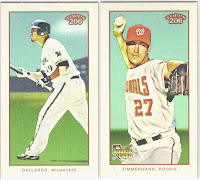 Next out of the package were some some of the T-206 base cards as well. 'I Am Joe Collector' has posted a very interesting poll on his blog asking which set collectors prefer from last year, T-206 or Allen & Ginter. The big plus for me is that the photos on T-206 were completely different from other Topps releases that year. Very little photo-recycling as far as I could tell. Also, I collected T-206 so it was an easy choice for me, however, I may just have to do a little more "research" into this and get up-close-and-personal with A&G's 2009 offering! 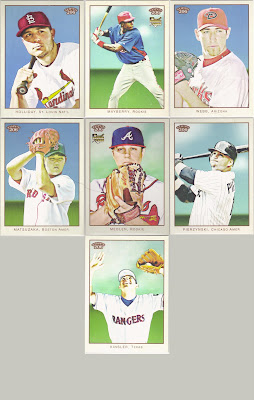 The "sweet spot" of the trade, for me, was that Brian included one of the framed autos he pulled. I have decided to make the completion of this set my quest. I like everything about these; 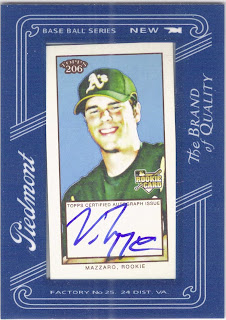 #1 - They are on card
#2 - The Piedmont frame
#3 - The sheer challenge of trying to put together the set. I need a challenge.
Last but not least, Brian fed my love of retro based designed cards by sending some 2008 Goudy as well as an '09 High # Heritage card I need. The bundle included some Cubbie goodness.... 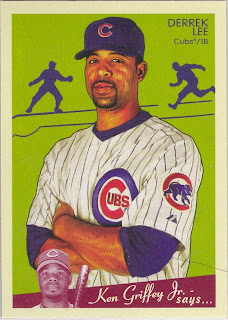 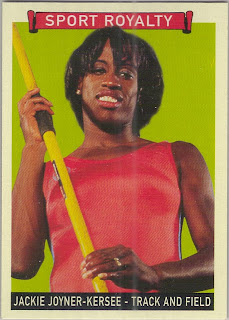 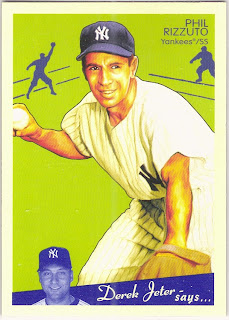 simply because I was watching one of my favorite 'Seinfeld' episodes the other day.


Thanks to 'Play at the Plate' for the trade and rest assured Brian, I am sending out my end of the deal tomorrow as I finally bought more bubble mailers. If you want a great trade partner then check out Brian's want lists and drop him a line. What the heck, check mine out to the right of this article. Let's work something out.