I received a package in the mail from a new friend of LFB2B the other day.

Roy left a comment on a fellow blogger's site referring to Upper Deck's 2009-10 Artifacts release and so I contacted him hoping to work a deal and gather some much needed singles for the set. Not only did he provide me with some Artifacts but Roy managed to send along some Cubbie and Blue Jay bonuses as well.

Firstly let's get to the meat of the deal.

Upper Deck Artifacts is what I guess you would call a mid-range product. The product itself, from a hobby-box perspective, is hit driven. Each pack contains one of the inserts or serial numbered cards in the set. The base set consists of 100 cards. Cards 101-135 consist of National Hockey League 'Legends" and are serial numbered. Cards 136-150 are also serial numbered and feature the games 'Stars'. The final 50 cards feature the 'Rookies' and are also serial numbered. There are the requisite jersey and autograph inserts to fill out the set. Every single card in the set has 3 different tiers of scarcity as well, those being Bronze, Silver and Gold. Suffice it to say if this were a baseball release it would proudly wear the "gimmick" tag.

The cards themselves are excellently done and if you just want a decent sized hockey set featuring the players of today then the 100-card base, which can be had for a steal, is just that.....a steal. Here's a look at a few of the cards Roy sent.

Goalie cards will always be brilliant. I was lucky enough to get 5 of them in this package. 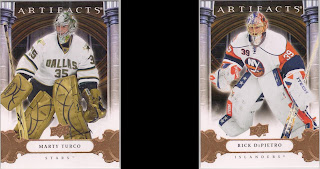 Along with a handful of other singles off my wantlist I also received a pair of cards featuring some Gold Medal heroes of the 2010 Vancouver Olympic games.... 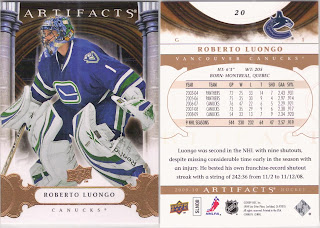 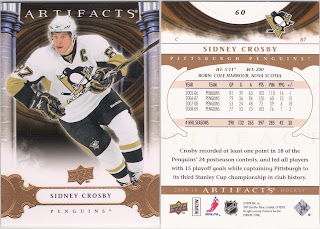 I included the backs in the scans because they are just as nice to look at as the fronts. I have read the sentiment expressed before and I tend to agree looking at these cards. If Upper Deck had given their Baseball releases the apparent respect and honor that they give their Hockey releases, I think it quite plausible that there would still be two companies releasing "licensed", and therefore unconfusing, Baseball cards.

Along with the Artifacts Roy took the time to include some cards from my favorite teams and players nicely packaged in pairs. (it is so easy to please a collector with O.C.D.....lol). 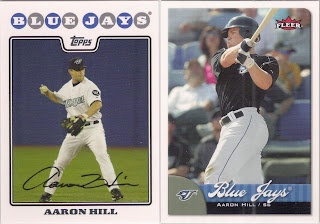 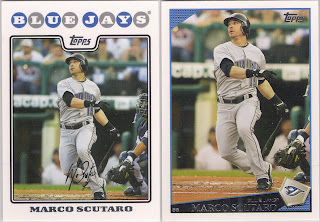 Not to be outdone I also received a card of the best thing to come out of Calgary, Alberta since Bret and Owen....... 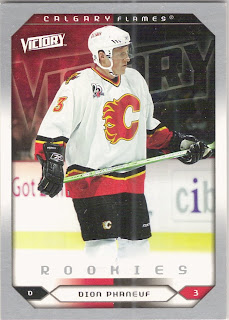 Thanks again Roy and rest assured, I will be busting at least one or two more blasters of '09-'10 Artifacts so your want lists may shrink a little more. I will keep in touch for sure.