Poll - To Rip or Not to Rip

Since I first started this blog I had an idea brewing that I had wanted to somehow make my first poll rather momentous. Seeing as with the whole 'Million Card' March that Topps has created quite a stir revolving around vintage cards this was as good a time as any to break out the post.

My previous incarnation as a collector sort of wound to a close when I began to collect anything and everything. No longer was there a clear definition as to what I was doing and it became more of a "job" and less of a relaxing pass-time. In amongst those disjointed obsessions was pack collecting, I had to buy one of almost every release regardless if I collected it or not.

When I returned to collecting and started to pull all of my stuff out of storage I came across a box of unopened packs. Inside was one I had remembered quite well, it was my first and last foray into what at the time was considered "high-end" product. 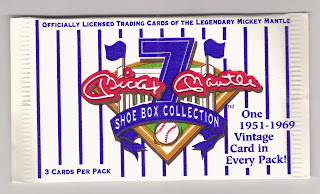 Obviously the lure of this product was the guaranteed vintage card inside. To me I thoroughly enjoy the pack itself, it just looks cool.

Now, here is the problem I face. When I first bought this pack back in 1997 it was all I could do not to rip it open. It has now sat for 13 years in the very same state since purchase. I have seen boxes of this product listed for $400 and packs for over $40. Every time I look at this pack I get the itch to open it but can always "talk myself down".

ITS FATE IS NOW IN YOUR HANDS

Here is a scan of the back of the pack with listed inserts and stated odds. 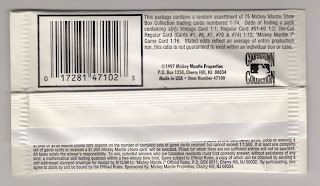 I have placed a poll regarding the fate of this pack on the right side of my blog. The poll is set to close 1 minute after the start of the very first game of the 2010 MLB season between the New York Yankees and the Boston Red Sox.

Let's see if this will truly be an "Opening Day" to remember!!