I had mentioned in the second part of my card expo experience that I would introduce you to someone who had made the whole experience worthwhile. What had started out so pathetically disappointing turned out to be a great day, not only for me but for my collection as well.

Let me introduce you to Frank Schulte. 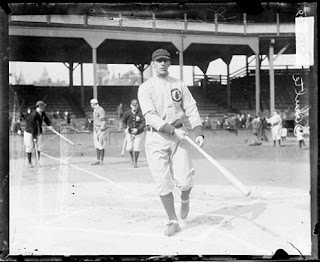 Frank Schulte had a major league career that spanned 15 years and 4 cities. He made his debut on September 21, 1904 for the Chicago Cubs and played twelve years mostly in the outfield. Frank played parts of 2 seasons in Pittsburgh, played half a year in Philadelphia and ended his career as a Senator.

His nickname was 'Wildfire'.

Throughout his career he had several notable achievements;

As a bit of a quirky factoid Frank Schulte received 1 HOF vote in 1937 from the Baseball Writers of America.

So, how did 'Wildfire' Frank Schulte help turn around my card show experience?

When I decided to get back into the card collecting hobby I figured it was time that I start turning my collection into a serious collection and one that people who may not be into the whole collecting/collating/chasing mentality could still enjoy. One of the goals for this year was to acquire a card that was at least 100 years old.

Not only did Frank help in that department, but he gave me the added bonus of being a member of one of my favorite teams AND the card I acquired was from one of the most famous sets of all time. The T206 Tobacco Set; 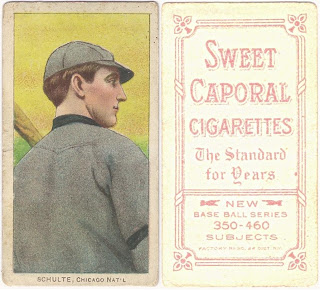 Regardless of how the day began what matters is how it ended and I could not have been happier to have something like this added to my collection. It truly has me excited to collect again.

A special thanks to OleMissCub from the Northsidebaseball.com Forums for posting the photos from which I got the one of Frank. Thank-you's as well go to The Baseball Page and Baseball Almanac for providing the information.