Mickey Mantle marks the half-way point in this Box Break of 2010 Topps Series 2 Baseball. So far it has been a run-of-the-mill box with not much excitement or surprise thus far. Mickey also marks the half way point in the accompanying countdown of my 'Top 10 Favorite Television Show Theme Songs'.

#6 starts to get into more of where my musical tastes lay, so much so that I even own the 45-rmp vinyl single of this show and have had it since I was a little punk.

Forget what L.L.Cool J and Clark Johnson did to the memory of this show. This theme stands the test of time.

This pack of baseball cards however is about as memorable as the movie S.W.A.T. Very little to be impressed with so I am not even going to try and make it interesting. Pulled one Toronto Blue Jay and was shut out on Cubs. The lone base card appearance is from John Buck. 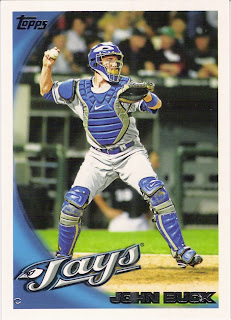 The only other base card I decided to scan was the Orioles 'Franchise History' card. The only reason why I scanned it is maybe you could tell me what Topps was thinking when they chose this photo. I just do not get it. 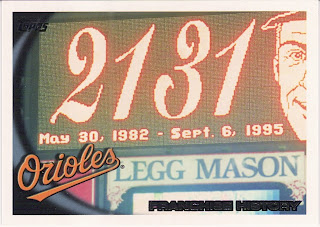 Inserts filled the centre as usual and also contained the second hit of the box. This time around I pulled the 'Peak Performance' autograph of Lou Marson. After looking him up to see just who he was, it turns out Lou was a player with a great deal of potential who is now possibly on his way out of a spot in Cleveland due to another "hot" prospect coming up through the ranks. 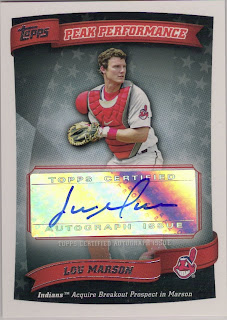 The Gold parallel card is of Derek Jeter and is numbered 0176/2010. Paul Molitor reminds Blue Jays fans of the glory days with the 'History of the World Series' card celebrating 1993. 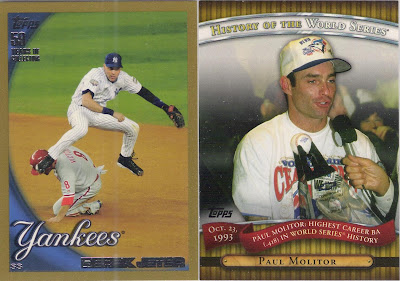 Mr. Cub Ernie Banks is on a card that I wish I had the opportunity to have had thrown away. Someday I will be able to get a hold of some of the earlier Topps Cubs cards. Today I will just have to settle for a facsimile. 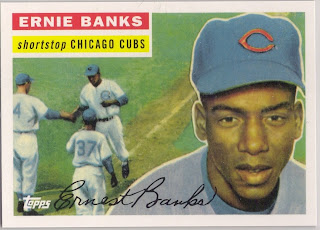 Topps' 2020 3D card is of right-hander Zack Greinke, Chris Coghlan is the subject on the 'Turkey Red' offering in this pack and the 'Peak Performance' card is Chad Billingsley. The 'Legendary Lineage' card is of two guys laying down on the job, playing in the dirt. One of them had the nuts to call themselves "The Greatest". I am sure had Ali been able to say anything he would have begged to differ. 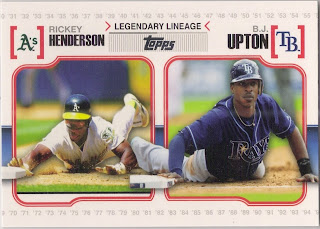 The 'Vintage Legends' card I pulled is the only one that I was hoping to pull from this box. I have heard a great number of criticisms of this sub-set and they are all valid. However, when you are a fan of a player that you can never hope to own his regular issue cards, anything remotely well designed is a bonus to get. Yes, there could have been more attention paid by Topps to the design details of this card. But, it is still a cool card in the end. 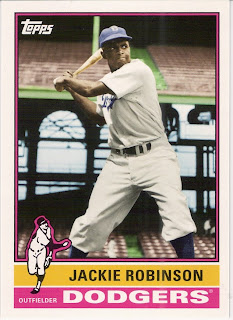 Now, normally at this point in the post I would show you the Topps Million Card Giveaway redemption card I pulled. That I will still do..... 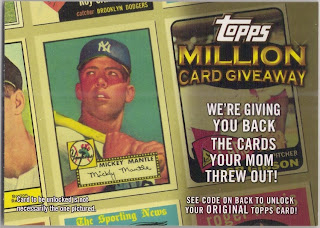 ....However, its transmorgification into something else is being put on hold. Today Topps announced that they will be running a special 'Million Card Giveaway' offer in conjunction with Stephen Strasburg's debut tomorrow night with the Nationals.

Read about it here.

Essentially what is going to happen is that MCG cards redeemed tomorrow night after the first pitch by Strasburg is thrown have the chance to unlock the very first MLB card of Strasburg featuring a photo of him throwing his very first ML pitch. I love this idea. So, I will hold on to this redemption as well as the one I get from opening pack #6 in this break. I might even be tempted to open pack #7 a bit early for that MCG redemption code. I am not sure.

Anyway, that is it for the uneventful Mantle pack and I am looking forward to tomorrow trying to win the Strasburg sweepstakes with some codes. Also to be unveiled will be the #5 Favorite Television Show Theme Song.