A fairly early Sunday morning for me brought with it a few quiet moments so I took the opportunity to visit with Ty Cobb and see if he could best Ruth, Mantle and Pedroia. The current holder of the "best pack" moniker is Dustin Pedroia.

Can Ty claim the title?

Before we answer that we need to take care of a bit of business first. The number #7 entry in my 'Top 10 Favorite Television Show Theme Songs' list. Not a week goes by where this one does not spontaneously pop into my head and I end up humming it.....

Now, we can get to what Ty has to offer on a Sunday morning.

The Blue Jay and Cub count for this pack stands at two apiece. The Blue Jays are represented by left-hander Scott Downs and rookie Mike McCoy who's gold parallel card I pulled in pack #1. 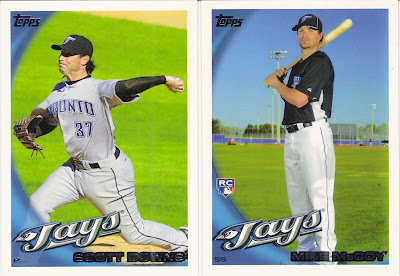 The Cubs cards belong to second baseman Mike Fontenot and a 2008 photo of the centre-field bleachers scoreboard at Wrigley Field. For a pack that again lacked any outstanding photos this is a nice one to see and I like that Topps has decided to forgo the standard Team card photos of players and put something interesting and unique to the club on the card. 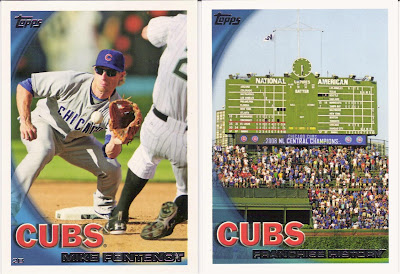 The only other base-card I pulled that is worth mentioning is one of another player I picked off the Waiver Wire in fantasy and has done wonders picking up Hanley Ramirez's slack in the stolen base department. With all the hype surrounding other "rookie stars" this season his play has been under the radar for the most part. 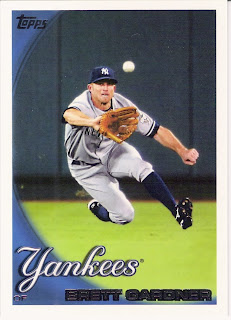 Insert goodness from "Pack Cobb" consisted of a Gold parallel of Edgar Renteria numbered 1275/2010, Rod Carew's rookie card that someones mother may have thrown out and Alex Gonzalez celebrating a HR that ended the second longest game in World Series history.

Topps 2020 3D card was of Gordon Beckham who needs to start playing a whole lot better if he's gonna make the 2020 All-Star Team and Justin Morneau is the 'Turkey Red' card card. 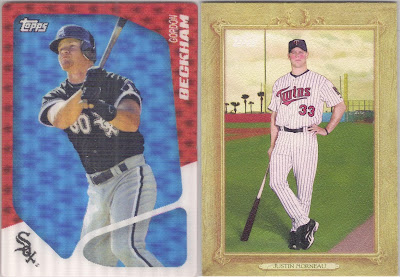 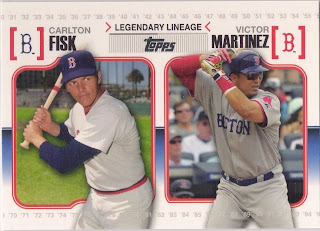 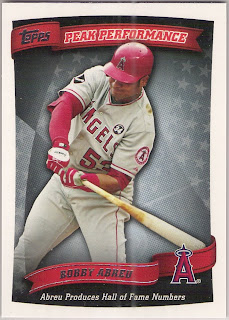 The 'Topps Million Card Giveaway' Redemption card has a bearded, somewhat unhappy looking Thurman Munson on the front. Perhaps he looks so unhappy because he knew what Topps had in store for me when I redeemed the code. 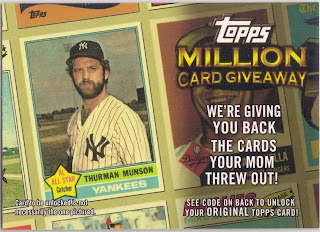 While the card I got does have one of the elements that I feel makes for a cool card, it unfortunately cannot save my ultimate disinterest in this "win". Ultimately though, the thrill is simply in entering the code and watching what pops up. Nothing more, nothing less. 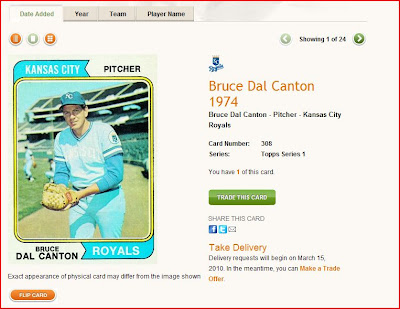 The 'Vintage Legends' card was a 1986 version of Jimmie Foxx. I have yet to see a bad looking card from this set (and I know 4 packs is no basis for a solid opinion) but it is apparent from this card that Topps sure likes its Baseball Legends to be airborne. 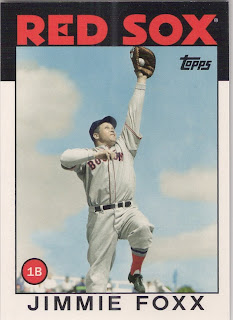 The second I saw this I immediately thought back to a similarly styled photo from last years Topps set.... 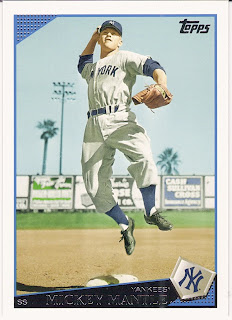 If nothing else I hope that Topps takes the time to pursue more thought out photos like these. I can imagine that they were tedious for the players to do because these probably did not happen in one take. It probably took several tries. But, at least the photographers were trying to be interesting and move beyond the standard posed shot or the repetitive action shot. Take all of your pitcher cards and put them side by side to see what I mean. Photos and design are just as big a part of a product as who is on the card.

Time for Topps to take this "exclusive" and make some changes to how things are "usually" done.

So, there we have it. The first four packs of this box have been ripped and Dustin Pedroia seems to be holding on to the "best pack" title. Tomorrow I will be digging into the third row of the box and seeing as Babe Ruth went before Mickey Mantle the first time around, Mickey will go first this time.

Plus, I will also unveil the #6 entry in my ongoing 'Top 10' list. This selection is one that I actually own the 45-rpm single of and was easily one of my favorite shows as a kid. I had t-shirts, posters and toys.