Welcome to Day #3 of 10 in this entended Box Break of Series 2 Topps Baseball, JUMBO style. So far, neither Babe Ruth or Mickey Mantle have produced anything truly memorable in this break. Today's choices were Dustin Pedroia or Ty Cobb. Seeing as the Toronto Blue Jays managed to subdue the New York Yankees last night, I will go with Dustin in honor of the win.

Before we rip though, we need to get to the #8 choice in my 'Top 10 Favorite Television Show Theme Songs'. As I said yesterday, this one probably winds up in a majority of 'Top 10' lists, or at least it should. It also holds some kind of unofficial record for the most car crashes, destruction and explosions in a opening sequence too, I think.

My favorite part of the sequence is Dirk Benedict's reaction to the Cylon. I like when shows nod to other shows like that.

Right off the bat I caught sight of a fairly thick piece of cardboard when I opened this pack so it is safe to assume the first "hit" of the box is out. We will get there eventually, first though is the base cards worth showing. As always, any Cubs or Blue Jays get displayed. This was a good pack on the Blue Jays front as I pulled four.... 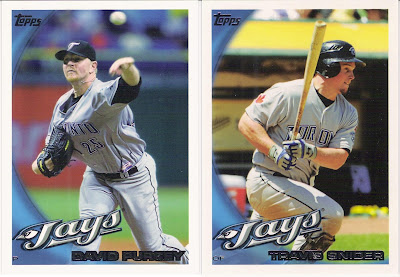 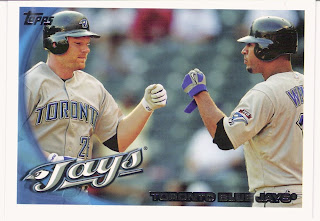 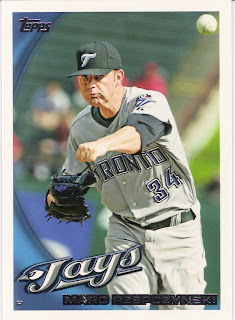 The only Cub I got was Geovany Soto. I also read a rumor that Abe might be showing up on White Sox cards this series. Gonna keep an eye out. 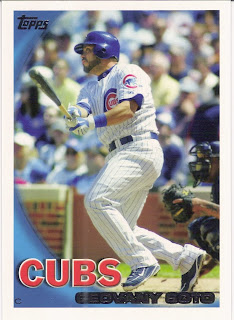 In the first pack I pulled a checklist that had Ruth and Gehrig on the front. I thought it was a decent enough card and a fine inclusion in the set. This pack I pulled another vintage duo on a team's 'Franchise History' card. This one makes me want to try for the rainbow set of it. 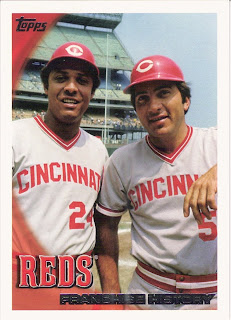 This also got me to thinking how sweet it will be to one day again be able to pull a Pete Rose card out of a Topps product.

In what is the first entry into the 'Let's try to recreate the Series 1 Randy Johnson card' Sweepstakes is Kevin Kouzmanoff. He definitely has the air but is lacking in the fully stretched out form. Nice try Kev, I give it a 6.8. 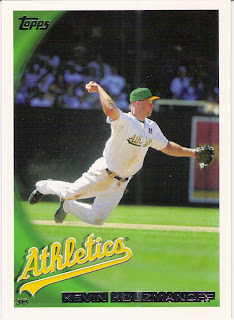 My nephews were recently here and I had the opportunity to be schooled on just how cool trains really are. I had sort of forgotten this from their last visit. I think this card will be making its way to Utah in the next package we send. 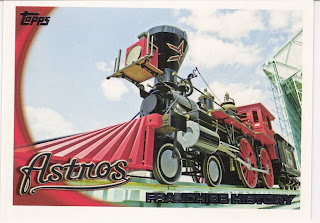 Lastly, an injustice from Series 1 appears to have been corrected in Series 2. There was not a single base-card featuring small ball in Series 1, the only thing close was a relic card of Yovani Gallardo. This time around Alexi Casilla of the Twins earns a spot in my PC. 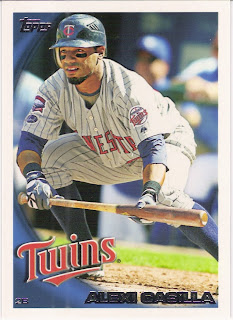 Moving on to the insert centre of this jumbo pack we already know there is a hit coming so we might as well deal with that first. When it comes to manufactured patches I honestly think they do have a place in the hobby. That place, however, is in BASE PRODUCT ONLY. Manufactured patches work in something like this set. They do not work in something high-end like the inexcusable monstrosity that was pulled in 'I am Joe Collector's' Hockey Group Break. If I had pulled this from any other release I would be rightfully upset. 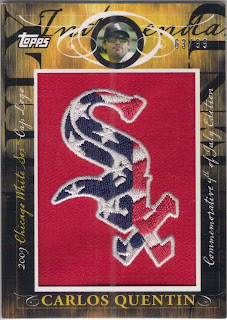 The other inserts were a Gold parallel #'d 1491/2010 of Rafael Furcal, a 1983 redo of a Tony Gwynn card your mother may have tossed and Whitey Ford showing off his record 10 World Series wins. Yankees fans, correct me if I am wrong but have the Yankees ever had green under the bill of their caps? Especially in the 60's? I am not 100 percent sure.

Andrew McCutchen goes all 2010-3D on us, 'Turkey Red' TR51 is of Torii Hunter and the 'Peak Performance' card is Dan Haren.

Jimmie Foxx and Prince Fielder are linked because in their days they were both the youngest players to post 50-HR seasons. Cool stat, still do not like the set. 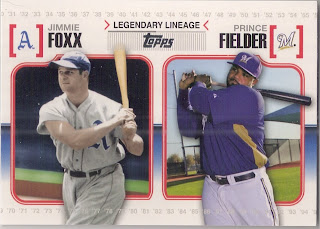 The final insert card is what Eddie Murray would have looked like on a 1964 Topps card. This card appears to be mis-cut on the front but everything lines up centred on the back. Looks like I will have to reacquaint myself with the '64 set to be sure. 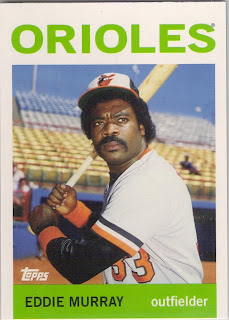 The 'Million Card Giveaway' redemption from this pack had Gary Carter on the front sporting the awesome powder bleu, blanc et rouge of Les Expos...... 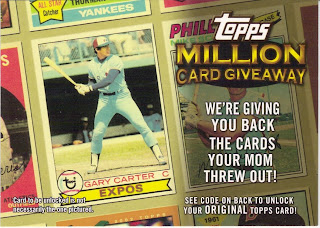 ...He turned into a 1992 Greg Maddux. At least Maddux is in a Cubs uniform so it does not completely suck. 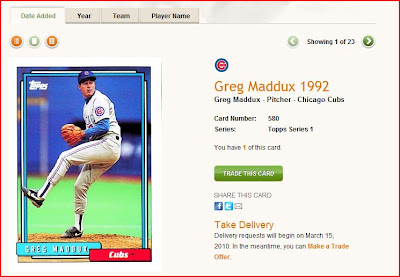 While looking at the 3D cards and trying to find something to like about them I did have one question that popped into my mind. Would it not make sense for card manufacturers to start developing their sets with rounded corners? Follow me on this. Not only would it decrease the amount of damaged cards produced, seeing as most of the damage I receive is bent corners, it would also take away one of the most ridiculous points of card grading. I have seen cards with, what I would deem, absolute pristine corners get knocked because under a magnifying glass the grader stated that they were not razor sharp corners.

So far, Dustin Pedroia carries the "Best Pack" ribbon right now. Not because of the Relic, that was actually never part of the consideration. This pack just seemed to offer more in the way of stopping and looking at cards, cards I want (Jays/Cubs) and all around fun. Tomorrow Ty Cobb gets to try and spike Ruth, Mantle and Dustin. Along with #7 in the 'Top 10' list.