Yesterday saw pack #1 of this box of Jumbos ripped. Today is the other side of the top row with Mickey Mantle trying to best Babe Ruth. For those of you who follow my Twitter feed you know what already happened, so, SHHHHHHH!!!!

Before we go I also have to introduce the soundtrack for this rip and the #9 choice for my 'Top 10 Favorite Television Show Theme Songs'. That is alot of typing but T10FTSTS does not really work. I always associate this theme with a rainy day for some reason.


For a pack of cards wrapped in a Home-Run hitter there were way too many pitchers in my opinion. 19 in all, to be exact. Not much else was exciting in this pack and the only thing worth showing, base-card-wise is the Cubs and Blue Jays I pulled. 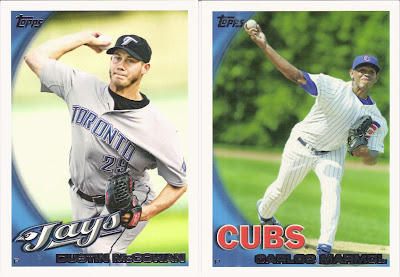 Imagine that, both pitchers!!

I stared long and hard at that Marmol card trying to see Abe somewhere in the bushes. I think I looked to long because I ended up seeing a sailboat. YIKES!!

The Insert section of the pack was worth the wait though. Gold parallel Rookie card of Toronto Blue Jay Mike McCoy, numbered 1322/2010 and a 1996 discarded card of Manny Ramirez, pre-dreads. 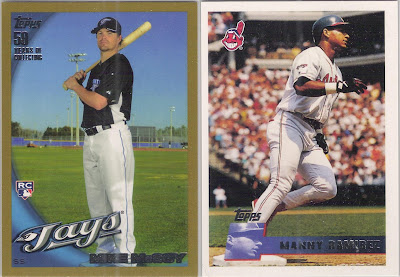 'The History of the World Series' card is Eckersley's triumph in 1989. As a Blue Jays fan I will always remember Dennis for his losing battle against Robbie Alomar in the 1992 ALCS. 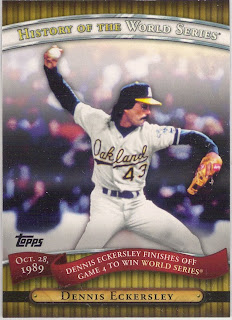 Another 2020-3D card in this pack of Madison Bumgarner of the San Francisco Giants. These cards are alright but a bit too flimsy for my tastes. I also pulled a black parallel numbered 14/59 of an intensely concentrated Steve Pearce of the Pittsburgh Pirates. 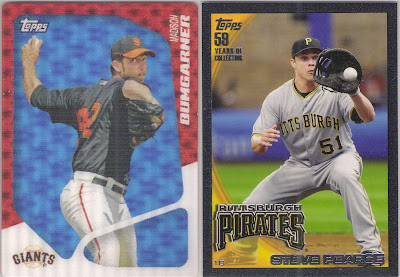 'Turkey Red' is next with the comical Yogi Berra balancing his catcher mask on his forehead. Classic. Topps is really trying hard to get me to like these 'Legendary Lineage' cards. Bo Jackson seems to be building up a bit of resurgence in the hobby. I have noticed him being included in some of the more recent releases, especially the relic stuff. Yet, he and Justin Upton still keep me unimpressed with LL. 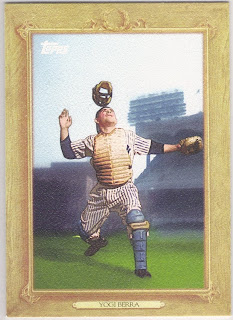 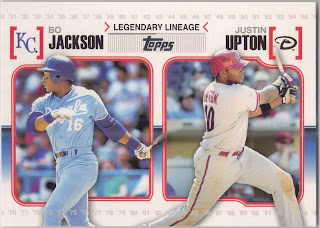 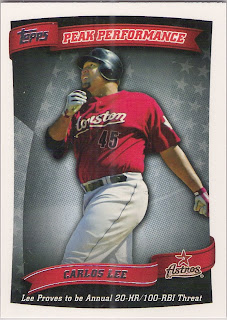 Lastly, the next card in the 'Vintage Legends' set is a 1990 version of Honus Wagner. This will probably be the closest I ever come to liking the 1990 design, but, that is really not saying much. 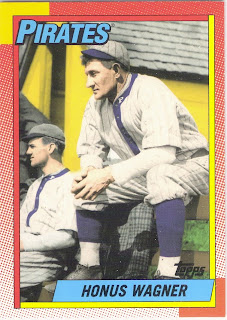 The 'Million Card Giveaway' card from this pack is a young looking Carl Yastrzemski. 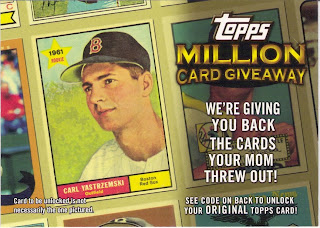 When I transmorgified it into the MCG Transmorgifier it turned into this....... 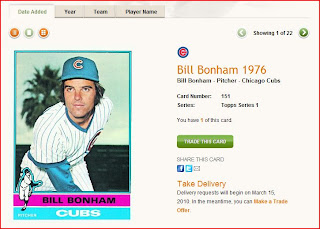 This was a truly disappointing pack when it came to the base-cards. No really good photos, no cards that made you say "Wow!". Even the inserts were marginally good. Getting a Gold parallel Blue Jay was a bonus and the Yogi 'Turkey Red' was alright. The best part was getting another 1976 Topps card which was a Cub!! Hopefully pack #3, which I will be breaking tomorrow sometime LIVE on Twitter, will produce something good. Still trying to decide whether it will be Ty Cobb making an appearance or Dustin Pedroia.

Also, stay tuned to the blog for #8 in the ongoing saga of 'Top 10 Favorite Television Show Theme Songs'. I think #8 will be one that is on almost everybody else's list.

To everybody who commented on the first pack rip in response to my feeling old for referring to vinyl albums, thank-you. It is nice to see that some things will always be considered better than the "next latest and greatest".