Usually my format for these is to grab a couple beverages and throw on an album from my music collection. Yes, I said "album" thus dating myself to the young'uns out there.

However, I felt like dragging this break out over the next ten days and stealing an idea from Stale Gum by posting each pack on Twitter as I rip it. Also, I have been way too busy lately to afford myself the luxury of sitting through a whole box break at once.

I still want some kind of musical inspiration but something that will last the time it takes to rip a pack. So, to achieve both objectives I will hijack this post and along with each pack I will post my 'Top 10' favorite television show theme songs.

Right off the top I have to choose between Babe Ruth and Mickey Mantle. I decided to go with The Bambino, I was feeling good about this pack.

Topps has been able to show off some nice photography in the last few years. This Robinson Cano card is a great example of how the mid-air throwing action photo can make a card look like a classic. 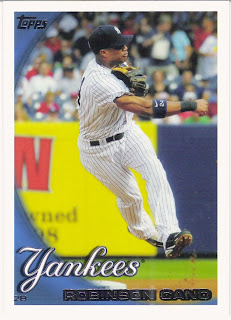 No offense to the player in this one but here is how to make the same kind of action photo look weak and awkward. By the way, I give credit to 'Hairless Marauders' in out Fantasy Baseball league for shaming me for taking this guy in the draft. I took a chance and bit it. 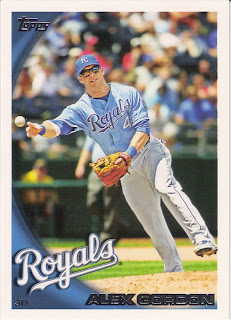 One player that is doing wonders for my team and was a Waiver Wire pick up deserved mention in this post as well as an appearance..... 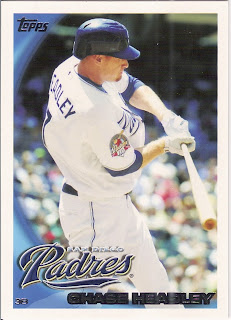 My first Cub of Series 2 is Abe-less, as far as I can see, this time around. 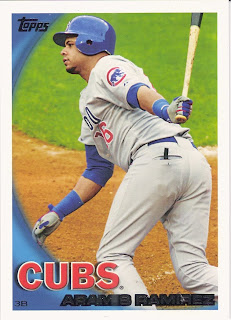 Jumbos are all about the inserts. Each pack is like an Oreo cookie, base-card goodness on the outside with a healthy dose of goodness in between. The Gold parallel of Carlos Guillen is #'d 277/2010 and Topps REALLY needs to go back to stamping these, the black ink is simply unimpressive. Ozzie's 1993 Topps card is one I probably threw out, not my mom. I do not know why Topps could not have kept with the theme of the Series 1 History and Tales cards with the 'History of The World Series' inserts, like another blogger said, they look too much like UD's offering.

Looking back on the Ozzie Smith card I noticed something that made me like the card all over again. 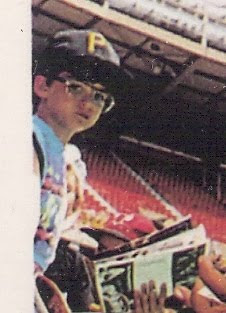 I like what Topps is trying to do with the SportFlics revival but if this is as far as Topps thinks cards will be going in 10 years, we are in serious trouble as collectors and Ubaldo Jiminez deserves better. Turkey Reds make their welcomed appearance here again and my first Series 2 TR is Roy Oswalt. Still don't like the Legendary Lineage cards and wish they would have stopped with Series 1. Even Brooks Robinson and Ryan Zimmerman cannot change my mind. 'Peak Performances' continue to look okay but may have been a better design for a base set rather than an insert. Also, Jason Bay, you are KILLING me in Fantasy with your substandard play. Time to man up!!!

The last two inserts from this pack are the 'Vintage Legends' insert which are going to be my favorite this time around. Even the backs of these cards have a look that is eye-catching. I pulled VLC6 - Willie McCovey. 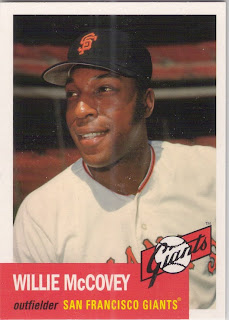 The other insert is the darling of Series 1, the Topps Million Card Giveaway Redemption. Mine features Roy Campanella on the front..... 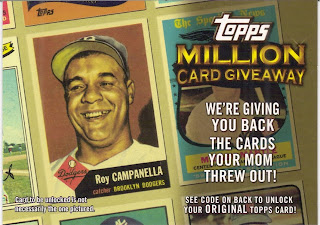 ....and the code on the back turned it into Mike Torrez from the 1976 Baltimore Orioles. 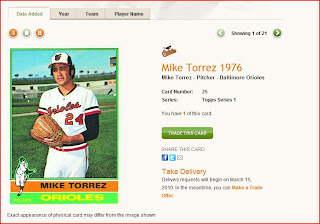 The only complaint I have early on into this is that if Topps is going to continue to use foil to outline the names then they need to choose a font size that is not going to result in the foil mushing all together and creating a ugly, uninspiring, frustrating mess on otherwise beautiful cards. Three examples from this pack alone bring home the point.

All things considered I am happy that Topps Series 2 is on the shelves and Allen & Ginter is right around the corner. Speaking of A&G, there are two things you should be made aware of, I am hosting a case break of Allen & Ginter as a way to kick off my joining Canada Card World in promoting their site. Secondly, with A&G comes the second offering of Gint-a-Cuffs, get in on the fun!!!

As for the rest of this box break I will be back again tomorrow with Mickey Mantle and pack #2. Also, I will be unveiling the #9 Favorite Television Show Theme Song of mine.