While the wait continues for the next Baseball product I will be forking over my hard earned money for, I decided to stop-gap my craving by collecting Upper Deck's 2010 version of their successful 'Champ's' Hockey which premiered in the hobby last year. The big chase cards out of this release are the 'Museum Relic' cards which feature fossilized dinosaur remains and are seeded at 1 redemption card per case. Hopefully luck is on my side and I pull one.


The simplest way to describe 'Champ's' is to think of it as a set collector's AND a player collector's dream. There are so many different variations and combinations that come into play here that there is something for everyone. Where Topps 'Allen & Ginter' and UD's 'Goodwin Champions' are full sized base sets with mini parallels, 'Champ's' is a full sized AND an extensive mini base set with variations AND parallels. What makes this work is that NONE of the parallels or variations make up ANY of the base set, leaving the set collectors happy and giving the player collectors a formidable task. I know that the capitalized words are wearing thin now so I will stop, I think I made my point.

The full sized portion of the base set is made up of 100 cards featuring stars of today and yesterday. There are 4 parallel versions of these 100 cards all with varying insert ratios. The base set is a blue bordered card with a photo of the player in an outdoor frozen pond setting surrounded by an antique looking gold frame. Also featured on the front of the card is the position of the player and their jersey number, a nice touch.The muted colours of the jerseys help with the overall look of the cards and give it an excellent retro feel. Here is a few......... 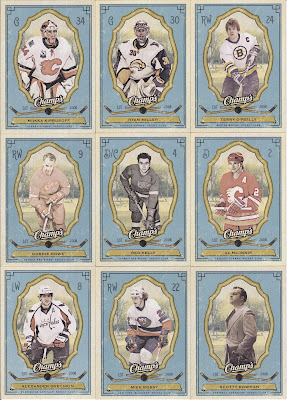 My only beef? We all know what jersey Wayne should be wearing! Tsk,tsk Upper Deck.

The green border parallel singles are inserted at a ratio of 1:5 packs. Following the pastel coloured theme of the set I can see why they might have called these "green", I would have gone with teal, maybe? Could be just me. I pulled Ray Bourque, Patrick Kane, Henrik Zetterberg, Brandon Dubinsky and Doug Gilmour. 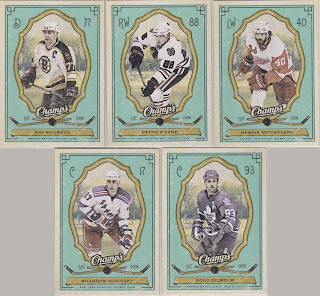 The red border parallels look super nice and I am trying to decide if I want to collect this set. 100 cards is very possible and will pose a nice challenge. The insert ratio for these is 1:10 packs. I pulled Steve Mason and Mike Richards. 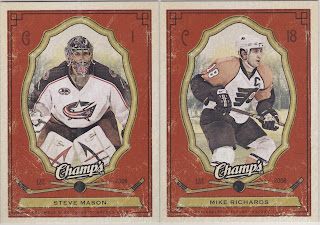 The yellow border parallels come in two different versions. Seeded at 1:20 packs is the version I pulled featuring Vincent Lecavalier. I searched eBay for a scan of the other version called the 'yellow animal icon' border and found one featuring Sid The Kid, these are seeded 1:80 packs 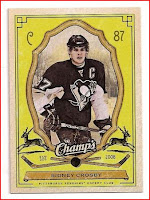 Now we get to the "meat" of the 'Champ's' set. The minis. Cards #'d 101-580 are all mini cards, however, the way these cards are grouped is what truly makes this worthwhile. The hockey players cease to appear with card #388, from that point on we get 'Wonders of the World', 'Natural History Collection' and 'Historical Figures'.

This for me is how these multi-subject sets should be done. Keep each subject contained within its own subset. That way, those of us who are OCD can feel like a set is complete without having to have all the cards in the entire set. See, there will be no number gaps in what we have decided to collect so we will not feel compelled to fill those gaps with unrelated cards thus needing to collect all the unrelated cards.

Anyway here is how the minis fall. 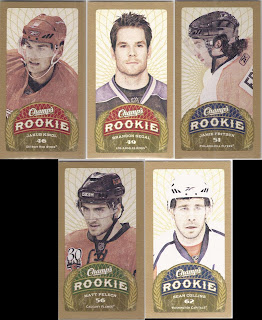 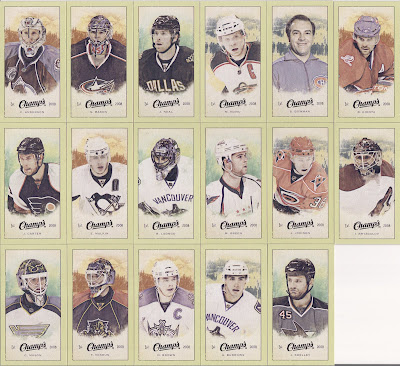 Just like the full size set there are parallel versions of the mini cards featuring NHL players. However, these parallels are a bit tougher to pull than their full sized counterparts and the variations are on the back rather than the front. As well, the ratios are different for the Rookies than they are for the Stars. It sounds way more complicated than it is, that is why I am here to clarify. Here are the ratios;

With this box I was crazy-happy to pull a NHL Stars Mini Parkhurst back of the best defenseman of all-time, IMHO. Yeah, he is a Flame so I am a bit partial. Big Al MacInnis. 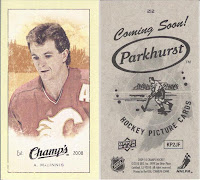 I did pull a Rookie Mini red back from a pack I bought a week or so ago, just wanted to show it so you know what they look like. Although "red back" is pretty descriptive. 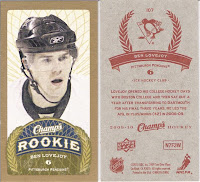 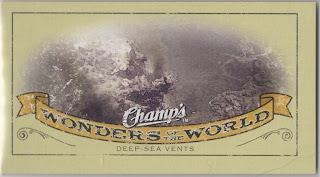 I pulled 6 of the 'Natural History Collection' cards which number from 417-514. These are a visually eye catching design and would make a great collection of cards on their own. My six feature The Rocky Mountains, Edmontonia Longiceps, Pachycephalosauridae, Dawson's Caribou, Grizzly Bear and Purple Violet. 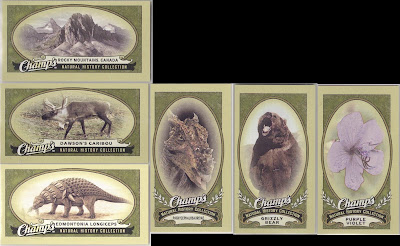 Lastly making up the final cards of the entire set, spanning numbers 515-580 are 'Historical Figures' which are comprised of Canadian Prime Ministers and American Presidents which means that YES there is another Obama card. I pulled 3 featuring Louis St.Laurent, Brian Mulroney and John Tyler. 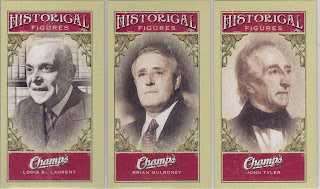 Now we come to the part of the break that most people wait for and probably most people just scrolled right down to, the "box hits". I ended up with three relics and one autograph. The only disappointment I had with the autograph is that it is of a back-up goaltender who, outside of his immediate family, I am guessing has a sparse fan base. Other than that, the autographs are hard signed which is how it should always be. A plus to this one is that it also has his jersey number included in the autograph. I got Pascal LeClaire from Ottawa.

The two hockey related relics I pulled feature a pair of Right-Wingers, one a Hall of Famer, one not so sure. Glenn Anderson and Marian Gaborik. 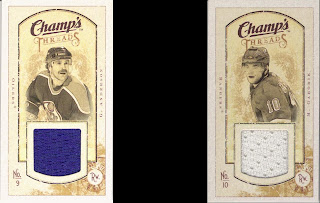 I specifically said hockey related relic because the last relic I pulled is from an 33-card relic set called 'Hall of Legends'. I cannot find the ratios for these cards but I understand them to be a fairly difficult find. I have seen some on eBay featuring Larry Bird and Magic Johnson and looking at the checklist which has been posted the athletes are truly impressive. I was happy to find Philadelphia Phillie Mike Schmidt in a pack. I especially like that the photo used for the card is an up to date photo. Classy. 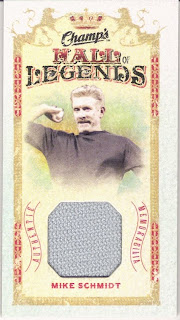 Overall I am very pleased with the 2009-10 Upper Deck Champ's product and will be purchasing at least two more boxes trying to build the 'Natural History Collection' and the Mini NHL Stars. This a set that can keep a collector busy for quite some time and offer something different at every turn. There appear to be unannounced inserts in Champ's as well. When I picked up my box at my LCS the dealer showed me an Upper Deck 'The Champions' autograph card of Gaetan Boucher he had pulled from a box he had opened. As far as I know these were only announced in Upper Deck Series 2 hockey and I see no card for Boucher listed.

When you look at the care and thought that goes into the hockey releases from Upper Deck you cannot help but wonder what happened with baseball. If this had been the same model that was applied to Goodwin Champions I think it would have quite possibly been the "Set of the Year" in 2009.

Thanks for sticking with me throughout this break and for constantly checking out 'Long Fly Ball To Because.......'. If you are collecting Champ's yourself then send me an e-mail and let's work together to help each other out. If you saw anything in this post you want feel free to contact me as well, we can work something out I am sure.

Lastly, to play us out is Black Rebel Motorcycle Club