In the last little while it has been increasingly harder to find the time to post something. I have been working on some posts regarding some super trades and some excellent donations from some generous fellow bloggers. I am also super-sickly-late in posting my appreciation and displaying the booty from my first monthly breaks from 'I Am Joe Collector'. I did however, want to take a break from the Yankees/Twinkies game to post something that has been gnawing at me.

Part of the stuff I received from Joe Collector was this cool card ; 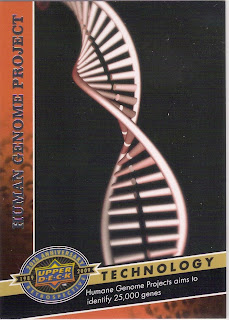 What struck me about this card was the seemingly monolithic task a group of scientists have taken upon themselves. I have, and always will be, impressed with science and the minds associated with it. However, I am absolutely amazed at this latest task so I decided to see just how daunting it truly is.

The results are in.

I racked my brain and can only come up with 15. See Scientists are amazing!!!