UD Goodwin Packs - Brought to you by Codine & Amoxocillin

Greeting everyone, hope your afternoon is faring better than mine. Let me explain the title of this entry. Yesterday morning I started to develop a slight pain in one of my molars. Being the bull-headed mule that I am I ignored it and went about my day. By 4:30pm I was experiencing the third increasingly fierce wave of pain from said tooth.

The kind of pain that actually makes you sweat.

I left work around 5:30 and drove the 40 minutes home. I decided to stop by my dentist and see if anyone could tend to an "emergency" situation. Rightly so, the dentist had left for the day but I managed to snare an appointment the next morning. As the night went on the waves of pain grew more and more frequent and equally increasing in intensity.

Long story short I have an appointment for a week from Monday to have the tooth extracted. I get to live with an abscess for a week. The dentist was kind enough to prescribe a suitable painkiller and something to fight the infection.

To help with the pain I prescribed for myself a quick trip to the Card Store before I fill my prescription. Priority sorting problems?? YOU BET!!!

I decided to try my luck with a brand spanking new unopened, fresh out of the card shop owners trunk, box of Upper Deck Goodwin Champions. I grabbed 5 packs to be precise, figuring that a lump of coal from the Titanic or some weird bug encased in card would help ease the pain. What I got I was extremely happy and pleased with. What the other customer opening packs with me got I was jealous of too, that later.

Pack #1, card number one was a sign of things to come for me. I like to think "omens" are real and actually control the chaos of the universe. However, I KNOW that it was just a random happenstance that was favorable to me. I pulled my namesake right off the hop. 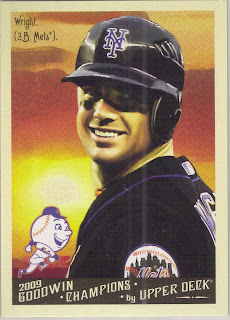 Great looking card and a very decent way to start off a product that has appeared to disappoint most everyone who has broken it so far. I received a couple of Phillies in the pack in the form of Chase Utley (#100) and 7-time All Star Robin Roberts (#112). The Utley card appears to have a production flaw in it. I spent 30 seconds trying to wipe off a white hair to the right of Chase before I realised it was part of the photo. The mini card from the pack was Stephen Drew of the D'backs (#120).

The other card from the pack is going straight to my father, he was a fan of his movies. This is a cool looking card and I may try to pick another one up for myself. 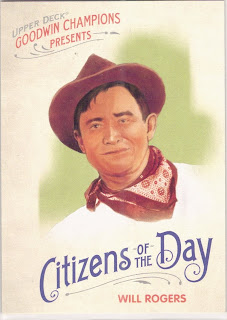 The first autograph pull is of Josh Willingham of the Nats, card #A-JW. 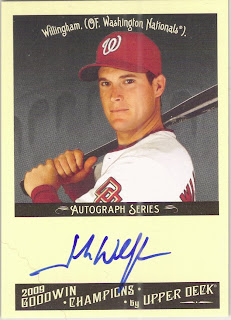 Pack #3 had another '20th Anniversary' insert #2150 featuring Chris Paul and a trophy...woo. Mini parallel insert is of Koji Uehara #139, Felix Hernandez (card #134) and some skier, Jeremy Bloom (card #161), who apparently played for both the Philadelphia Eagles and Pittsburgh Steelers. Must have been good.

The show-off card of this pack is another hockey card but one which I am happy to get. Card #81 belongs to Wayne Gretzky, in an Oilers uniform even. 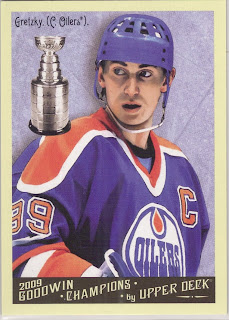 It was at this point that the guy opening packs beside me pulled a 1/1. He got the Mike Schmidt printing plate, red was the colour I do believe. Nice looking plate too.

Pack #4 started off with another '20th Anniversary' insert, this time however it hit an all-time low. David Eckstein??!!??Of all the Cards to feature on a card that marks their first World Series win in 24 years they pick him? Whatever. Oh, it is card #2155 for those keeping score at home.

Pack #4 was also a pack of stark contrasts. I first pulled this majestic, cool looking card of Ichiro, card #69. The Japanese flag waving in the background adds to the coolness of this card. Then I pull this card (#179) of a guy who appears to be the Champion of stepping in dog crap?? I dunno. Check those shoes Marty. Also, nice headband!! In all seriousness though. Anyone who has the attention span to kick anything over 60,000 times and for over 8 hours straight deserves a card. 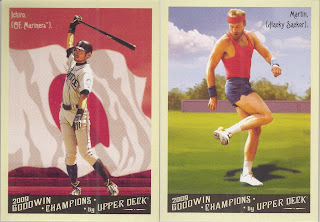 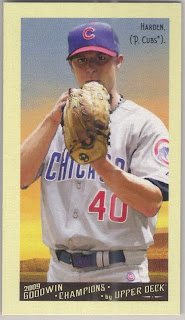 And my first black-border Gypsy Queen backed mini is of an apparently good basketball player with an unfortunate set of initials, O.J. Mayo, card #24. Does anyone know if these cards come with different colored printing on the back? Just curious. 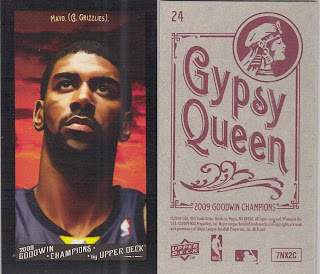 I left a certain pack for last because it felt thicker than the others when I pulled it. Having seen no dummy cards I felt a little more confidant with my last pack. Hopefully it was something decent. As I stated earlier, Titanic coal or a bug would make it worth it.
Pack 5 as it went was.............. 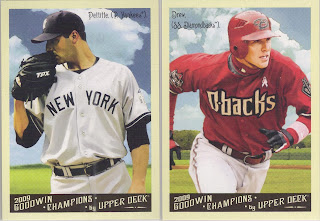 Mini-Philly-ness to match with his regular size card from pack #1, Robin Roberts. 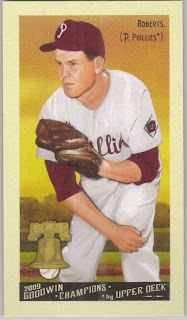 Lastly, the card that I was hoping to hit with and make all the aching in my tooth go away. The thick card that teased me. Card #CGM-CF...... 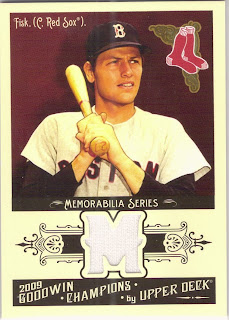 A little bit of airport-tarmac-arm-waving-god-willing-world-series-goodness from Pudge!! Nice card indeed!!

While I am impressed with the design of Goodwin and the selection of subjects for the cards I still have to give the nod to Allen & Ginter. The biggest drawback here was the "5-cards-per-pack" delivery. I would expect that from a product that is considered "upper-tier" or "high-end". I don't see Goodwin as such a product and therefore I feel a bit ripped-off with getting only 5 cards. As with A&G if it were not for my anticipation (read as saving my money) for the Topps T-206 release I may have grabbed a few boxes of Goodwin. They price out here at my local Hobby store to $95 per box. If UD had increased the number of cards per pack they may have had their winning product for 2009.

My head hurts and Tylenol-3's are calling my name.