A while ago I was reading about Beardy's quest for the Burke Kenny Nona-fecta. In the mix of the few scattered packs of 2009 Allen & Ginter I had purchased it turned out I was able to help him out with the mini A&G back version. Initially, I had been faithing and hoping that he would pull the Loch Ness Monster card in one of his Gint-A-Cuff's box breaks and we could swap. Such was not the case but he did contact me after the breaks and dangle another mini that I needed. 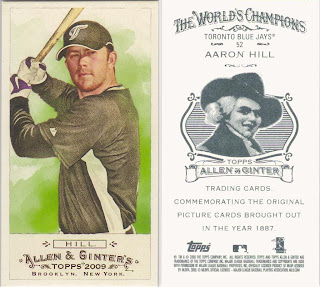 As you all know, very rarely if ever in this collective do envelopes show up without a little bit extra inside. Along with Mr. Hill there were a pile of Blue Jays and cards of my namesake. The first two out of the envelope were both numbered. A 2009 Topps Finest blue refractor of Vernon Wells and a 2008 UD Piece of History red parallel of David Wright. 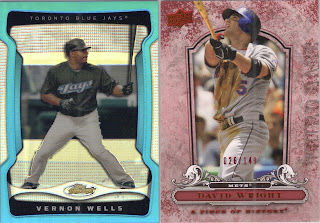 More shiny refractored goodness featuring Vernon Wells 2009 Finest base card and Lyle Overbay from 2008 Bowman Chrome. Overbay's signature here looks like it was lifted from something he might have handed in in grade 2 or 3. Practice man, practice!! That gross looking smudge was on my scanner glass....yuck!! Must have been when I tried to scan a doughnut or something. 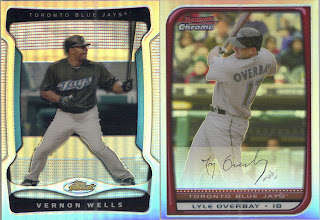 I have seen some posts of the Upper Deck Spectrum cards before and have never really been that impressed with them. However, I have come into possession of a few lately and they do look much better in-hand than they do scanned. The foil mixes well with the colours and the design is not all that offensive. Beardy sent me a few more including a numbered red parallel of David Wright.

Along with shiny goodness there was some retro goodness as well. I like the look of the 2007 Topps '52 set (who wouldn't) but apart from affordability and a different crop of stars, I fail to see the point behind it when the 2001 Topps Heritage set already exists. There was a bit of Goudy goodness as well. I have grabbed a few packs of these and have been toying with the idea of putting the set together. 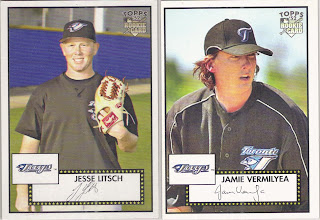 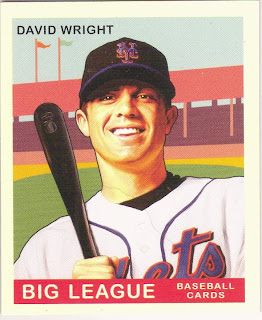 Lastly, what would a package of cards from one of my favorite teams be without some honest-to-goodness flashback/remember whens? The bane of the Blue Jays fans existence in the 80's was that the team always seemed to be 1 or 2 pitchers away from putting it all together. It was a fun time to be a fan but frustrating every spring to see the holes in the pitching staff. Several players were positioned to help fill those gaps. One of the two most infamous players to do that was Bill Caudill, the other being Jim Acker. Caudill spent more time trying to get out of jams outside of the baseball diamond than he did inside on the mound, where he belonged.

This card I just had to post for so many reasons. Juan Guzman was one of the best fastball pitchers the Blue Jays ever had. When his control was on he was virtually unhittable. Juan used to drive the Jays broadcasters insane. When the game was going his way he would get the ball from the catcher and throw the pitch in less than 5 or 6 seconds. When he was off, boy was he off!!!! He would sometimes take almost a full minute between pitches. I like this card for the hat that doesn't seem to fit, the fact he is not even looking at the camera and the painfully forced smile on his face. 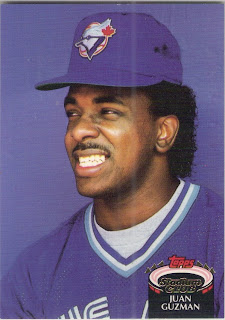 A big thanks once again to Beardy for the cards and rest assured once I get to the rest of what I have in storage there will be some more Orioles coming your way.