$20 Worth of Blastin' Artifacts

Yesterday, on the drive home from work, I decided to stop into Wally World and see what the card section looked like. Now, with this being Canada, I have learned to accept that the card section will be completely devoid of Baseball or Football. All that exists here is Hockey.

Lower to the floor are usually the 1 to 3 year old forgotten blasters that they refuse to put on sale because some chump like me might be frustrated enough to actually pay full price. This time, however, the shelf looked different. There were these big red stickers on the boxes that looked as though they might be promising. They read, "50% Off".

This was worth a look.

As I dug around I found something that I was even collecting. 2 years old but still collecting nonetheless. 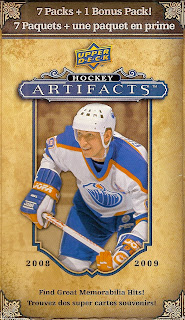 This is where it got strange. The first handful of blasters were emblazoned with those '50% Off' stickers. Near the back I found a couple with '60% off' stickers. Same product, just different skew numbers. Sure enough, a quick pass under the laser price reader showed one box for $12.49 and the other box for $10.00. I dug around for another box with the same skew number, cashed out and made my way home.

Up until this year I have liked the look of the Upper Deck 'Artifacts' Hockey release. The small size of the set and the players included make this a fun little set to put together. The challenge is there as well for those who want to go for the SP/Serial #'d half of the set as well.

So, as you can see, going in to this I was not expecting much. I was pleasantly surprised at the end of ripping all 16 packs. Firstly, for those unfamiliar with the look of 'Artifacts', here are a few of the better base cards I managed to pull.

As always with hockey cards, the most colourful and sharpest looking cards are the goaltender cards. I pulled a total of 13 goalies. Gotta show the goalies!

Mikka Kiprusoff, Tomas Vokoun
I mentioned earlier that I was pleasantly surprised after breaking these two blasters. With the odds they way they were I figured on one insert at best. I managed to pull 4 inserts out of these two blasters with two of them being keepers. 2 were from the 'Legends' serial numbered portion of the set, 1 was from the 'Stars' serial numbered part of the set and I lucked out and pulled a 'Frozen Artifacts' Jersey swatch inserted 1:36. Not bad at all.

Lastly, this is one of the lowest print run cards I have pulled since coming back to collecting and to pull it from a blaster was even better. Now, it is no Gretzky or Ovechkin but he is still part of one of the best Dynasty teams of all-time.

Altogether this was a great value break for me, so much so that I am actually heading out the door after posting this and seeing if there are any more $10.00 blasters of this stuff left. If any of you reading are collecting this set or are interested in any of the cards here, drop me a comment or an e-mail and we can definitely work out a trade.

Thanks for stopping by and seeing what I had to say. It is always greatly appreciated.