For the last month I have been inexcusably lax in honoring those who have seen fit to send me cards worth putting into my collection and in return taking on those cards which I have no desire to keep. Things creep up on you incredibly fast when it comes to bubble mailers and the next thing you know, you have to do a post like this just to cover what has been sent.

Firstly, I have begun to seriously focus on the players I collect. Putting sets together can really chew up the time and make it easy to neglect the supposedly simpler things in Cardworld. Four cards have been added to my Ricky Romero collection. One of them came from Chris over at 'Stale Gum' who gladly parted with some 2010 Heritage Chromero-Jo. I am still looking for the Refractor and Black-bordered version of these. Like I said, I have neglected my PCs. 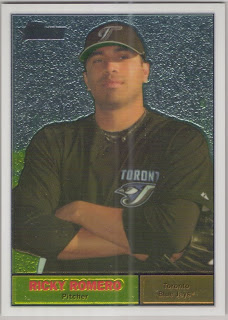 The next two Romero cards were purchased as a lot on eBay for a VERY acceptable total. The 'SP Prospects' National Honors card is the first relic card I have added to the PC and the 'Bowman Heritage' is the first RC. 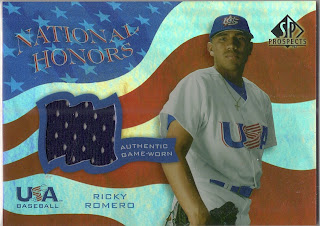 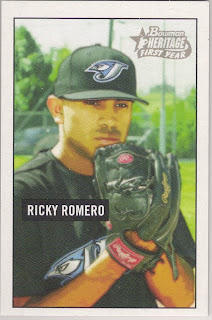 One of the things I like about Ricky Romero, aside from him being a Southpaw, a Blue Jay and quite possibly the future Ace of their staff, is his signature. It is clean and more importantly, legible. I received my first Romero auto last year, coincidentally, from Chris at 'Stale Gum' This auto I had seen sell several times and was happy to finally snag at a great price on eBay. A 2006 Bowman 'Signs of the Future'. 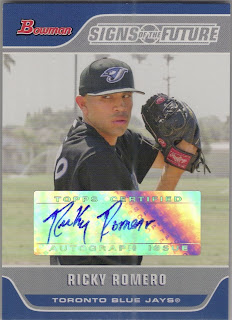 Yeah, I know its a sticker. On card would have been much better on this set but that is true for any set. No sense in complaining and it still has a home in my collection. This winter I am going to make a solid effort to build my Ricky Romero collection by at least a hundred cards or so. This thing needs to be shown some lovin'.

An even longer time ago, Chris over at 'Nachos Grande' posted some trade bait. I had a few things he was looking for so two of his cards came my way for a series of cards that were better served in Pennsylvania. Besides certain players I like to collect certain subjects that have been featured on cards. One of those subjects are authors. When those authors are featured on shiny cardboard it is even better. 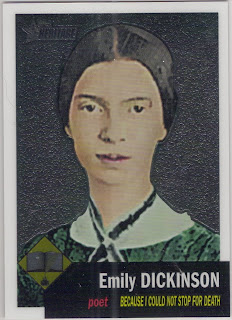 The other card that caught my eye happens to be my first relic from the 2008 Allen & Ginter set. Some pin-stripey-Cubbie-goodness featuring Carlos Marmol. 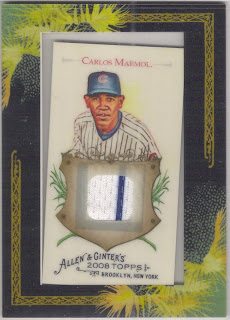 The last card I want to feature in this post was an eBay purchase and one I decided to grab on a whim one night. If I ever get around to redeeming it I hope the card looks as good "in hand" as it does as a scan. More Cubbie-goodness, this time redemption-style. 2010 Topps Finest Rookie Redemption #7 for Andrew Cashner. ...will eventually become, THIS. 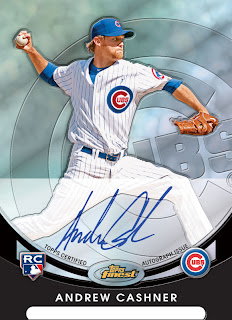 Any opportunity to get an on-card auto of a Cub is one I cannot pass up.

Looking at my desk here I have managed to shrink my pile of envelopes by a total of five. I have a few group break envelopes to open and sort and share with you. It feels good to get through some of the clutter and it feels even better to properly thank those that took the time to trade me some of their discards.

As always, if you see anything you want on my "For Trade" lists or if you have anything from my "Want Lists" I would gladly work a deal to benefit us both.

Send me an e-mail.