Mickey Mantle is as ready as I am to kick off the weekend. We have wound our way down to the final row of this box and Ty Cobb is holding on to the "best pack" title right now. With all three "hits" from the box revealed it is going to take something extra special to shine here on out.

We have also come to the point where I announce the runner-up in my 'Top 10 Favorite Television Show Theme Songs'. Alot of people might have this as their number one, understandable, it was almost mine. I enjoy watching this show every time I can and it is one of the few shows that can tug at the old heartstrings. To this day it is a show that produced the best final episode EVER!


Tomorrow brings #1 in the list, but it is time to take a look and see what 'The Mick' has in store for me.

If he is trying to impress me then he has started off terribly. Zero Toronto Blue Jays out of this pack and only one Chicago Cub, and a double at that. Carlos Marmol stretches one out towards home in this shot. 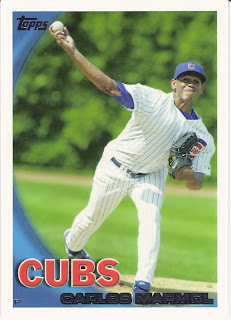 One redeeming base card pulled is the third one of Series 2 that features a a player bunting. This almost makes up for your complete disregard of this photographic subject in Series 1. Practicing the art this time is Michael Bourn. 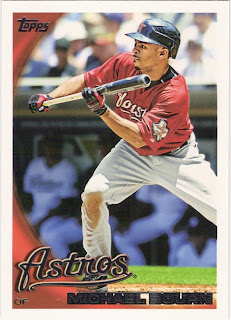 The only other base cards worth showing off here are not even really worth showing off. I will include them simply because they are a part of my Fantasy Baseball squad that are currently locked in a dogfight with everyone's favorite Bearded Blogger. Besides, what other blog is going to feature Matt Cain, Jake Peavy and Anibal Sanchez together?

As I head into the inserts it does not look like this pack will be deserving any kind of recognition of "best". A Nolan Reimold Gold parallel numbered 1375/2010 might be of some interest to someone who likes the O's and if they happen to beat me this week I may send it along as a bonus. Steve Carlton's 1982 Topps card looks completely washed out here, wonder if the real version is the same, or else the Black printing plate went missing. Bob Gibson's Record of 17Ks in a World Series game is highlighted on the 'History of the World Series' card.

I think I have decided I like these 'Team 2020' 3D cards enough to collect them all. Ryan Howard winds it up at the plate on this one. Jackie Robinson looks classic as usual as TR70. Ian Kinsler is featured on the 'Peak Performance' card from this pack. 'Legendary Lineage' offers me Luis Aparicio and Alexei Ramirez.

I was expecting 1 "original back" Card Your Mom Threw Out from this box and it came in this pack. Not exactly who I was hoping for but not a disappointing pull. Who can complain about a 1985 Robin Yount? 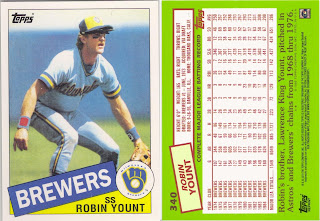 Another set that I really like form this release is the 'Vintage Legends'. To me it is like having a custom card made but not having to worry about learning how to make custom cards. I like when my laziness is rewarded. Tris Speaker dressed up in 1981 Topps rewards that laziness. 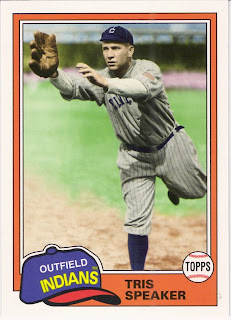 I have been on a fairly decent run this box with the 'Million Card Giveaway' redemption cards. With the added chance to snag a 661-Strasburg now it makes the entering of codes a little more fun. This time however, it was not really any fun. Roger Maris took the day off and turned in from this..... 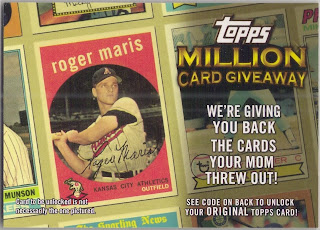 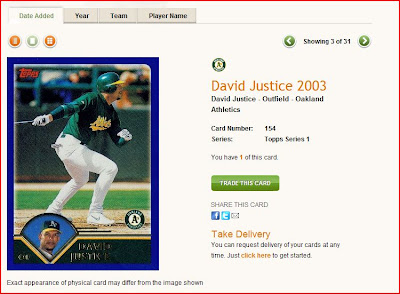 UGH!!
I guess they all cannot be winners. But you would think something wrapped in the visage of Mickey Mantle would produce something a little more stellar.

We are nearly done this journey. 9 packs have been presented and 9 T.V. shows have been themed. Tomorrow we wind it up where we started 10 days ago. Babe Ruth, 50 baseball cards and one kick-ass tune.