It is Thursday night, Strasburg-mania is still running strong on eBay and The Chicago Blackhawks are the 2009-10 Stanley Cup Champions! More importantly, we have been waiting to see if Dustin Pedroia can wrestle back his "best pack" ribbon that Ty Cobb forcefully took away from him yesterday with 8 Chicago Cubs and one of them being a jersey relic. Maybe we will see 8 or 9 Toronto Blue Jays in this pack....one can wish!

Before we do we need to take care of the third place finisher in my 'Top 10 Favorite Television Show Them Song' list. This one is just a fun, funky, feel good tune written by a guy you might have heard of, Quincy Jones.


Now that we are in a feel good mood, time to rip this pack.

Sadly, Dustin did not bring the Blue Jay bonanza my way. In fact, Dustin only produced one lone Toronto Blue Jay in Jason Frasor.... 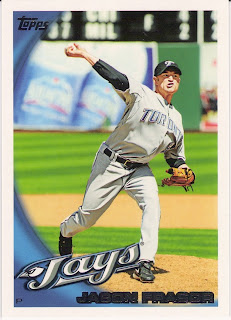 ...and in a seeming act of defiance I pulled ZERO Cubs base cards. Not a good start there Dusty. There was a nice run of Rookie Cards that came in this pack, 5 in a row, in fact. Not a bad straight but it does not make up for the lack of Jays and Cubs.

The rookies were Scott Sizemore of the Detroit Tigers, the recently recalled Ruben Tejada of the New York Mets, the recently demoted Esmil Rogers of the Colorado Rockies, John Raynor pictured in a Pirates uniform for whom he played all of 11 games. Raynor was drafted by Florida, selected by the Pirates in the Rule 5 Draft and then returned to Florida. Kinda neat trivia for his RC photo. Finally, Austin Jackson of the Detroit Tigers. 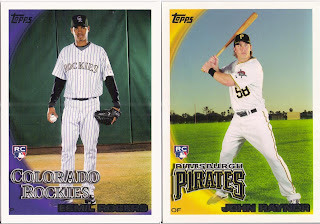 Next up is yet another entry in the "WTF Topps??!" department. Did they find someone else's disposable camera that had this photo on it and decided to make it into a card? 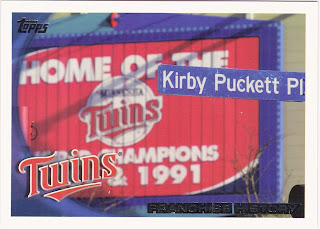 Final base card I want to show in this pack is one I had not really noticed until I went back through the pack for the third time. What is up with the photo of Luke Hochevar on his card? 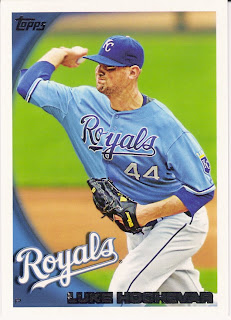 When I looked closely at it the first thing that jumped into my mind was......... 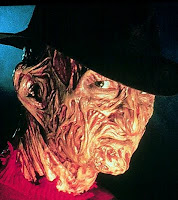 On to the inserted inserts. Jose Reyes is safe in all his landscape-oriented-gold-plated-poorly-ink-printed-serial-numbered-goodness #'d 1331/2010. 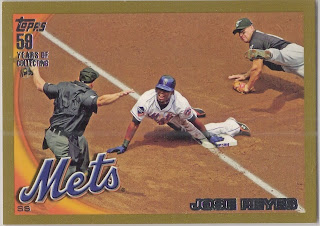 Hard to believe someones mom would consider throwing away a 1963 Harmon Killebrew, BUT, for it to be in this set it MUST have happened. The 'History of the World Series' card features Mickey Mantle and one of his 18 Home Runs. Pablo Sandoval looks all action-packed in his Sportflics 2020 3D card.

Having been in possession of one of the #1 Red Hot Rookie Redemption cards I got excited when I pulled this because it looked for a split second like another #1, but I will gladly take a #7. Billy Butler is the 'Turkey Red' card for this pack and Max Scherzer is bringing the heat on the 'Peak Performance' insert.

Dustin made a valiant attempt at best pack with this next card and it will remain in the PC, but, I still do not like the 'Legendary Lineage' set even though they brought Andre Dawson and Alfonso Soriano together. 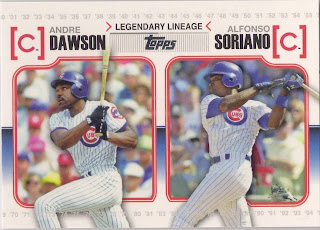 The 'Vintage Legends' card in this pack is a 1993 redux of Pee Wee Reese in all his Ted Turner-ish colourisation. 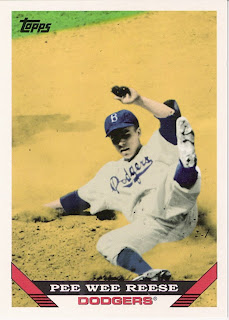 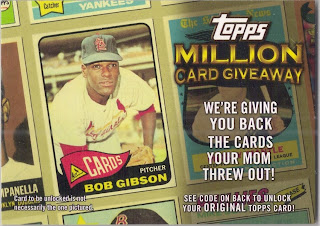 A truly valiant effort by Dustin to reclaim his title but Ty has kept a firm grip on it. The run of Rookie Cards was a nice touch and researching who these guys actually were was fun.

You have stuck with me now for eight of the ten packs from this box and I am immensely grateful for you doing so. We have two packs left to go, one is Babe Ruth and the other is Ty Cobb. I think I am going to open the Ty pack tomorrow to see if he can best himself.

Also, we are getting close to the #1 choice in my 'Top Ten Favorite Television Show Theme Songs'. I assure you you will not be disappointed. However, tomorrow I unveil the runner-up which should be a no-brainer once you see it.