As I sit here watching my beloved Blue Jays take on the Tampa Bay Devil Rays and I take a break from sorting out details for my upcoming vacation, I thought I would post the third box of Upper Deck Champ's that I bought. Hopefully this box proves to be just as nice as boxes #1 and #2. For the pack odds breakdown click either link to the breaks.


Okay, well this box break is going to be pretty quick as all there is left to post is the inserts and the hits. All commentary has been voiced so this is purely for enjoyment, and, I have truly enjoyed every bit of this product. Upper Deck has succeeded with the Champ's brand, I just hope they are around to continue this release.

Base cards are base cards, we have seen them enough times. I did challenge myself to play General Manager with this box and build three lines from what I pulled. I think I did pretty good....you tell me.

My guess is those lines would get me into the playoffs every year. I also pulled Bobby Orr, Tony Esposito and Scotty Bowman who would somehow make their way onto this team. I hear they were kinda good. 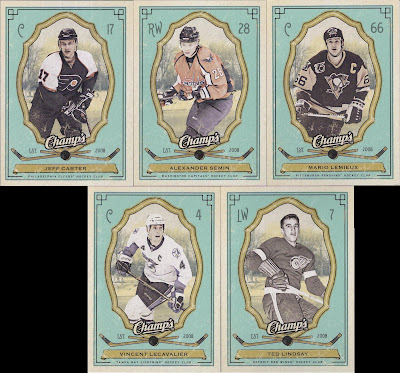 The two red border cards belong to Daniel Alfredsson and James Neal. I also received a package in the mail this week from an eBay purchase that went towards me building this variation of the set. So a bit of a post hijack here but I got Sid The Kid for a decent price. 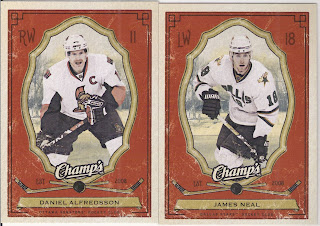 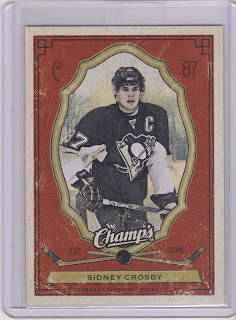 The one per box yellow border card is of one of my favorite players which is always a special card to pull. I got Al MacInnis. 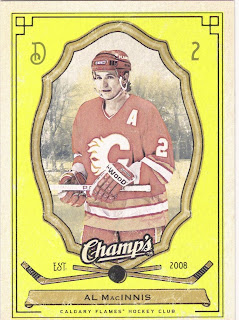 A bonus hit in this box was one of the 1:80 pack seeded yellow border animal icon cards. I pulled Scott Niedermayer who has a couple Hawks or Falcons (I am pretty sure they are Falcons) perched over his hockey sticks. 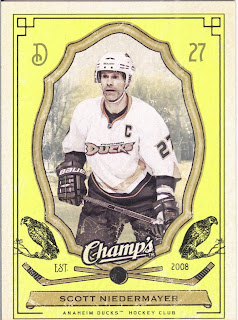 Speaking of favorite players before, one of the mini cards I pulled is of a hometown hero and thus a player I collect.

The Tyler Myers card was bittersweet because I was happy to get it but it served to remind me that Upper Deck has yet to fulfill my Rookie Redemption card from Artifacts for a serial #'d card of Tyler. When should one start to get bothered by the time it takes to ship a redemption? Is 5 months sufficient? C'mon Upper Deck, get it together!!

This time I only received 3 of the Historical Figures minis and they were all Presidents. John Quincy Adams, William Henry Harrison and George W. Bush. The Adams card is sporting a big bulge under the 'C' in 'Historical', not exactly sure what it is. Kinda disappointed that through 3 boxes I did not pull the only card I REALLY wanted, Pierre Elliott Trudeau. Oh well, looks like I will need to keep buying packs until I hit him. 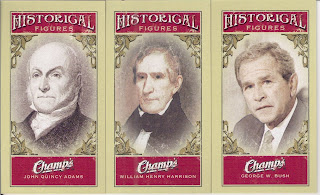 I lucked out on the one-per-box Wonders of the World minis and pulled two, Lake Baikal (home to 20% of the world's surface fresh water, cool stat) and Taj Mahal. 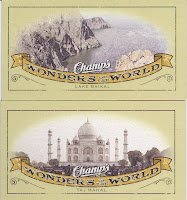 I was not expecting much from the hits this time around after the last box. After getting Crosby, Ovechkin and a Howe SP what else is there, right? Well, not to be disappointed these hits brought me right back down to earth. 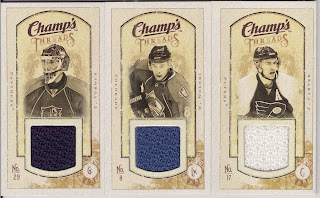 As much as I have liked this product, the Quality Control blows!! Upper Deck should be ashamed of all the mis-cut cards. I have contemplated sending the ones I have back to Upper Deck. I know a great number of people have done this before. If you have, could you please send me an email or comment about what the best and most successful way to return cards to Upper Deck and have them replaced? This failure is the only thing keeping me from loving this release.

The autograph from this box at least was not as bad as the last one. Andrew Cogliano has managed to score more points than he has spent years on this earth in three NHL seasons. The addition of the jersey number to his signature is a nice touch as well. Better than a scrub scribble.

The last hit of this box is the coloured-back variation mini. I got another red back card, this time it was of Brian Gionta of the Montreal Canadians. 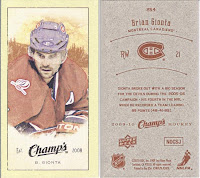 As I have said multiple times already. Upper Deck Champ's is a set collector's dream, worth the look from a player collector's standpoint and for sub-set collectors it offers something for practically everyone. This box added 28 new cards to my base set which was light years beyond the last box. Out of three boxes I have pieced together 95% of the base 100-card set. The mini cards will offer a continued interest and a fair challenge to complete. Aside from the major disappointment at all the mis-cut cards I would have to give Upper Deck Champ's 2009-10 offering a fair grade of 'B-plus'.

Thanks for following along these three box breaks and contact me if you are working on this stuff. I always welcome trading partners. If you can help me build the Red Parallel set too, I would be eternally grateful.

Until next time here is out musical guests.......