At the end of the 2010 Topps Box Break post I mentioned that, thanks to some diligent work by Play at the Plate, I decided to redeem all ten of the cards I received in the break at once. Hoping to cash in on the run of 60's and 70's cards that were, and still are, being rewarded at the 'Million Card Giveaway'.

With dreams and hopes in hand I logged in and began entering. The first two cards brought with it some Cubbie goodness and an interesting choice of photo. Both cards are from the 1973 set. 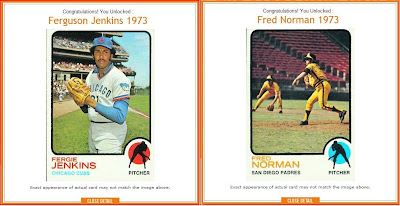 1973 Topps
Card #32
Fred Norman
Any time I can get a Cub, as well as a Hall of Famer AND a Canadian then things are good. The Norman card is great because he is a southpaw, plus it looks like a practice because the stands are empty.

The next card I hit was probably the best one I have won so far. It features two of my favorite players when I was younger and what is best it feature the one player in the uniform of the team I will always think of him with. 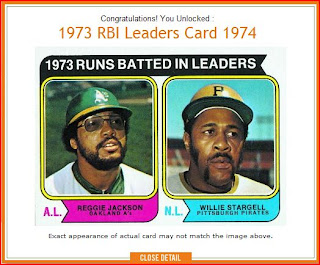 The next four cards feature two from sets I will someday complete, they are the birth year sets of my wife and I. A card that is my first from one of the best designs I think Topps has ever come up with and one featuring the coolest pair of glasses on a card that I now own. 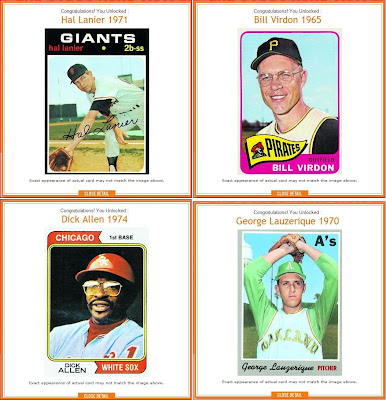 1974 Topps Card #70 Dick Allen
1970 Topps Card #41 George Lauzerique
The next card I won got me searching guides and lists looking for error cards. When the redemption came through and when the card was first added to my collection this is what it showed. 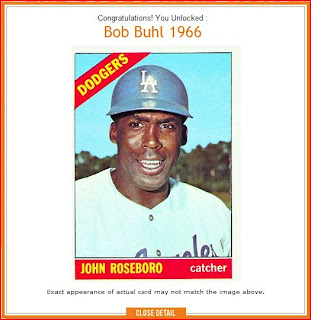 Now, obviously that is not Bob Buhl. It IS a 1966 Topps card but that is about it. I searched high and low for info about possible error cards in the '66 set. There are some but this particular one was not listed. I searched out the proper Bob Buhl card and there was no mention of an error. So, I decided to leave it and check again today. When I logged in tonight I checked my collection and saw this. 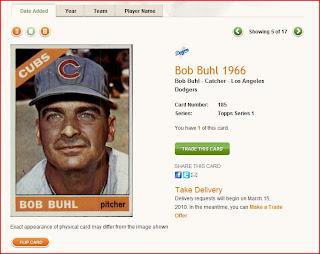 So, suffice it to say a simple glitch in the workings of the program raised the excitement level of this collector a bit. In the end, however, I am truly happy that if it had to be a mistake it at least went in my favor and I got another vintage Cub.

At this point I was telling myself to hold on to the last two redemption cards for a rainy day. I tell ya though, the pull of this redemption is amazing. I could not help myself and as quick as my resolve disappeared I had two more codes redeemed. One card is a very brightly coloured team card and the other is a depressing reminder of just how fleeting a major league career can be. 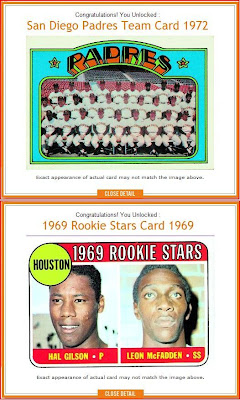 1969 Topps
Card #156
1969 Rookie Stars Hal Gilson/Leon McFadden
I had to Google both of these guys to find out who they were. Both Hal Gilson and Leon McFadden had what amounted to a cup of coffee in the majors. Leon's just took longer to drink.

As it stand I am still in love with this promotion and will try to hold out for Series 2 before buying any more packs of Topps. However, I do have a second set that needs completion so another 10-pack might be in store before I call it done for Series 1. Of course, I could just try and build a third set......SEE WHAT YOU HAVE DONE TO ME TOPPS??!!!?!?!