Having seen enough of the base cards everywhere I will fore go that aspect of this break. Suffice it to say I like this year's offering from Topps but there are a couple things that I am not such a fan of. First and foremost, I am absolutely disappointed that there is not one single base card featuring a player playing "small ball". As a fan of the bunt and a collector of such images on cardboard it disappoints. Secondly, I still feel that the team logos would have worked better on front of the cards. In the end however, these are minor issues with an otherwise excellent product. The 'Franchise History' cards are an excellent idea and any time you can add cards to a set that don't distract from its purpose is a win.

Okay, lets get to the break. What I like most about the boxes of Jumbo packs is the ease of building a complete base set. Barring packaging and production defects you can put together the entire base from a box, as I did with this one, with enough singles left over to help out other set builders.

The other welcomed bonus of Jumbo packs is the guarantee of inserts per pack. When building these insert sets it makes it so much easier. The inserts pulled were as follows. 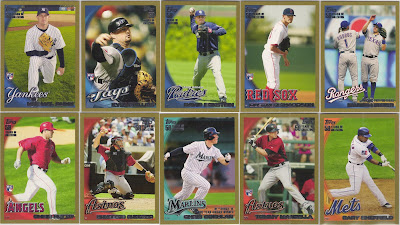 The Cards Your Mother Threw Out 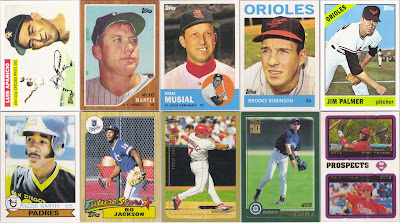 When They Were Young

This, to me, is an insert set that should have remained an idea. Even as a player collector I am not sure my collection needs these cards. 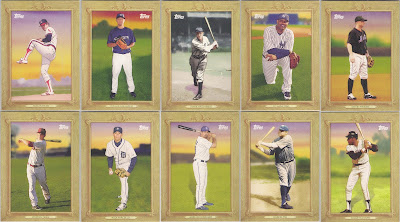 I am happy this set makes an appearance again this year. I think this set works as an insert better than it does as a stand alone release. Others who have been exposed to Turkey Red for awhile now seem to be a bit jaded but I like these and will continue to chase them this year. These next two inserts as well will have me busy for the next while. As always, any time you can combine baseball cards and learning a bit of history you can never fail.

History of the Game 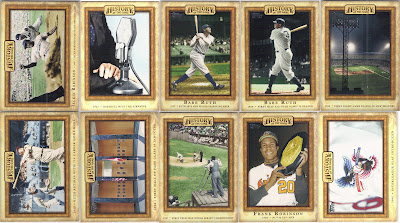 Tales of the Game 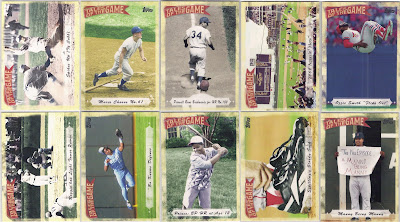 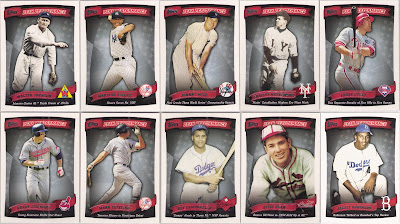 The design of this set feels like more of an afterthought. It works with the current players but the pictures of the Legends seem out of place. It is basically a rehash of the LOTG set from last year as far as I am concerned. 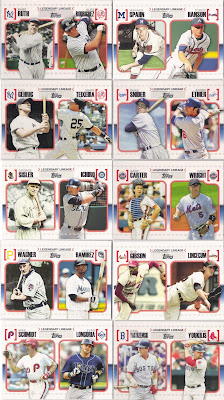 Regardless of player selection or design this insert set is the one I am most disappointed with. Topps REALLY dialed it in on this one. 'Then and Now' needs to stay in Heritage where it belongs. It does not need to be redesigned and renamed and put into a release that is already too insert heavy to begin with. This was a bad decision on Topps' part and I hope it disappears for Series 2.

Last but not least we get to the "hits" of the box. As you all know for Jumbos it is 2 relics and 1 auto per box, guaranteed, with the added shot at other inserts. I landed 1 extra of those and it is the one I had mentioned in an earlier post that would be of interest to Braves fans.

First the sure hits. 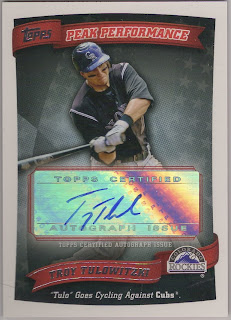 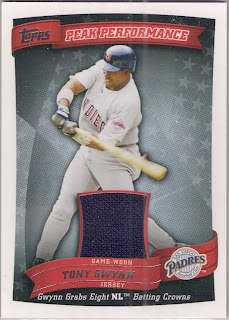 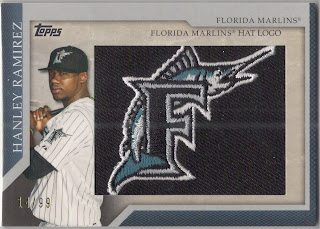 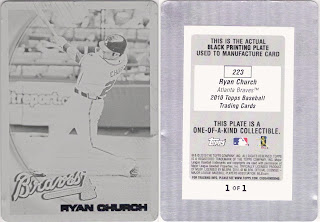 This is the third printing plate I have pulled from Topps' product. I have no idea how others have done with pulling these from product but they are definitely a nice surprise to see when you open a pack. I long for the day I open and find one of a player or team I collect.

All things considered I am once again happy with the flagship release from Topps and look forward to Series 2 and the U&H. Topps has struck gold with the 'Million Card Giveaway' and all that remains to be seen is if Topps can sustain this early excitement for the next 8 months. This may just be the shot-in-the-arm the hobby needs to start building a bit of a resurgence among the general public and to generate a whole wave of new collectors. It will definitely be fun to watch what happens.

Okay, most of you right now are probably wondering, "Wait a second, where are the redemption cards and what happened?". Well, I will tell you that they have been redeemed. Thanks to some astute observance from Play At The Plate I decided to mass redeem the cards and in the end I think I did pretty well. After a late lunch I will start working on the post of my redemption success, until then stay tuned.......


As has become customary here at LFB2B, playing us out are the musical guests of this break, Fembots.