Every so often I find myself unable to control my impulsive side. Usually it winds up with me doing something that I later look back on and think, "Was that TRULY necessary?" Indulgence is something that some people triumph while others see it as a momentary weakness. I'm not exactly sure where I stand on the subject but, suffice to say, it does provide me with subject matter to share so it cannot be all that bad. I can usually curb these impulses to a few packs here and there but this time I went a little further and have daunted myself with the task of building an entire set.


I have not been interested in purchasing, let alone collecting, football cards since these two were driving their sector of the hobby. 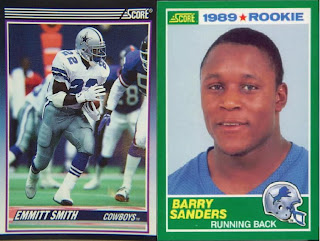 That all changed when I purchased a couple of packs of some of this years releases. I was intrigued with Topps Magic release because they had a card featuring Jackie Robinson. Also, featuring current NFL players in their NCAA uniforms is a unique idea. I am well aware of the opinions that some of the purists have but I guess my stake in preserving the "purity of the game" when it comes to football is nil. I get it, believe me. If Topps pulled this with baseball it would be an entirely different story. Just look at the backlash already being created by the Chicle Fiasco.

Upper Deck had a couple releases that I tried out too. Philadelphia was their answer to Magic as I see it and SP Threads appears to cater to the hit chasers. The release that caught and held my attention was Topps Mayo. 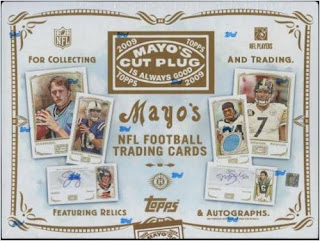 As far as football sets go, as I stated before, I would hardly classify myself as a "fan" and would definitely not call myself a collector. However, from the minute I opened my first pack of this stuff to the point I bought a box (Yep, this impulse buy went boxin'), I enjoyed every little bit of the product. The size of the base set is something completely manageable, 330 cards. The prolonged interest in building a set is fulfilled by the short-printed element of the base set consisting of the last 55 cards. As well, if you so desire, the "chase factor" for a complete set is fueled by 30 mini-exclusive cards. These cards, just like Allen & Ginter, are only found in rip-cards.

Each box comes with a cabinet card topper. There are varying levels of these cards which include standard photo, relics and autographed relic cards. I pulled Tony Romo. 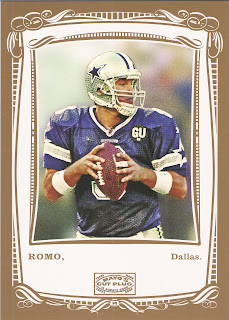 As far as card design goes I found it to be the best I from the small sample pool I had purchased. YES, it looks similar to A&G but what exactly is the problem with that? If something works, and people respond favorably to it then should it not be something that is repeated? The rookie selection, as far as I can tell, is comprehensive and complete. The veterans are obviously covered as well as they should be and the player roster used as "filler cards" hardly feel as such. 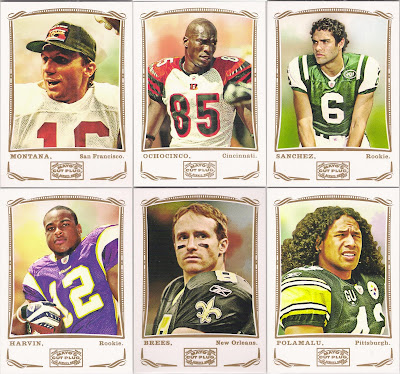 What would any set nowadays be without some kind of parallel? Is it even possible to release a set without some kind of parallel? I wonder if somewhere in one of the bloated bills passed by U.S. Senators there was not some kind of law passed that each and every card produced must have some kind of parallel. Actually, that idea may not be too far fetched....I will explain later. Anyhow, if you like parallels then Topps Mayo has what you are looking for. We have your one-per-pack-full-size-parallel distinguished by its silver border and silver back. These cards are also almost 3 times the thickness of the base set cards. This I like. Dummy cards, while useful in separating my singles in shoe boxes, cutting down on the success of the dreaded pack-searcher and offering me some kind of savings or promotion of memorabilia I will never be able to afford, are in the end annoying as hell. Making the necessary evil collectible is what every company should do and pay attention to. You would be surprised how happy your customers will be when they have nothing from your product, other than the wrapper, to throw away after spending their hard earned cash. 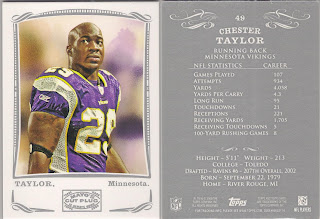 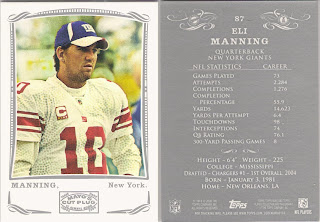 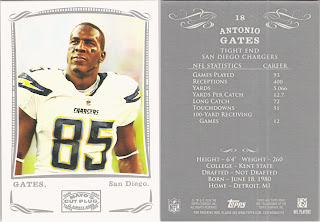 Also, what self-respecting retro-themed set would be complete without the one-per-pack-parallel-mini? Topps Mayo has that as well. Not only a base mini, we have "gold" minis as well as Mayo-backed minis and the not-to-be-forgotten serial-numbered Harvard-backed minis. These are numbered out of 25, a pretty nice pull. My only complaint with these, as with any mini-parallel set, is that to truly distinguish them from the base set they should include a different photograph of the subject. 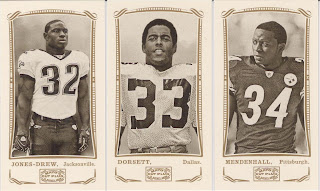 The other minor issue I have with Topps over these mini inserts is that they measure 1 9/16" x 2 7/8". Not that big a deal, you say? The standard Tobacco pocket pages are 1 1/2" x 2 1/2", these do not fit and thus storage is an issue. Thankfully the top loaders are over sized just enough that the cards fit into them without poking out over the top. I understand the original Mayo cards were this size, and once again I bow to the purists, but it makes it nonetheless annoying.

The Mayo-back card I pulled from the box was rookie Brian Orakpo of the Washington Redskins and the Harvard-back card I pulled, numbered 7/25, was Justin Fargas of the Oakland Raiders. Being a child of the 70's I was incredibly happy with this card and it immediately goes into my collection. Nothing like having one of the coolest dads EVER!!!

Next in line are the box hits. According to the odds boxes average 1 relic and 1 autograph per box. Not a bad ratio and looking at the list of subjects it is hard to decide whether Topps Mayo can rightly be labeled as a hit-driven product or not. I would lean towards the "probably not" side of things, much like I would classify A&G as not being a hit-driven product either. The relics and autographs are framed just like A&G but the autographs are stickers. I like the looks of these cards and for player collectors they will be an excellent addition to any collection. I pulled an autograph of Pat White from the Miami Dolphins and a nice shiny jersey swatch of Jason Smith from the St. Louis Rams. 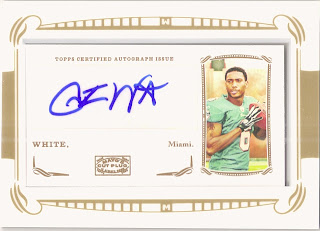 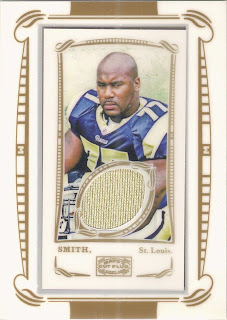 The last hit from the box was a framed Mayo cloth card which are seeded 1:192 packs and serial-numbered out of 5. On the upside I pulled a rookie, on the downside he will not be making an impact for his current team anytime soon due to a guy in front of him that is fairly decent, so I have heard. Numbered 2/5 is Stephen McGee, QB, from the Dallas Cowboys. 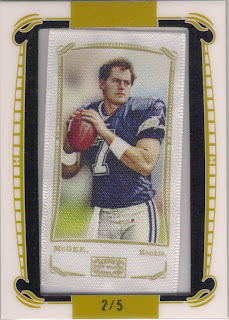 Lastly, we have the insert chase sets. These are all minis and 2 out of the 4 I am going to build. One is a good concept but unfortunately is limited in its inclusion and the other is an interesting idea for a set but being from north of the border it really holds no interest for me. There is a 14-card set commemorating the 1893 Chicago World's Fair. I have already managed to gather nearly half the set with a few more on their way to me.

The second insert set that sparked my interest is called Celebrated Citizens and focuses on 15 historical figures who hail from current NFL cities. The checklist for this set includes Samuel Adams, Henry Ford, William Tecumseh Sherman, David Crockett, George Washington and one of my Top 5 writers, Edgar Allan Poe. Unless I have the incredible luck to hit this years A&G DNA relic of him, this will be the next best thing for me. I have 5 cards in this set with, once again, a few more on their way.

Earlier I had mentioned the possibility of a governmental influence on the card industry. This theory is further solidified with the inclusion of a 50-card set featuring current State Senators. An excellent idea to include non-sports/historical/political figures in any retro-themed set, I really like the trend. This incarnation is just not something that holds my interest. The last set is called NFL Namesakes and are depictions of team names. The card store I frequent happened to have my teams card so into the collection it went.

As was the case with Allen & Ginter for baseball fans, there is enough offered in Topps Mayo for the non-football fans to find it worth looking at and finding something to collect. Even scattered throughout the base set are non-sports figures that collectors enjoy.

I was drawn to Topps Mayo, not only because I was looking for something to fill the void while waiting for Topps T-206, but as someone who's appreciation for the Allen & Ginter line is growing. This has pretty much solidified that I will be buying A&G this year and will be searching for boxes from the last couple years. Retro-themed cards are definitely here for the foreseeable future and as long as the manufacturers keep designing them to look this good they will continue to satisfy collectors from every sport.

As a conclusion I will leave you with some of the non-sport cards from the base set that found their way into my collection binder. I will also be posting a want list and a doubles list for anyone else who has ventured into 2009 Topps Mayo territory.

And, of course, how could any set be complete without some tie-in to The Love Boat??!!?