A few days ago during one of the first NHL games I have found the time to watch this season I ripped through the Jumbo box of 1992 Upper Deck Baseball I had purchased in hopes of finding one of the autographed Ted Williams cards still up for grabs. Back in the day this box would have probably sold for around $50 so getting it for roughly $10 was okay in my books considering the potential. What I have decided to do with the singles is package them off by team and give them away to loving, deserving homes. Some teams have already been claimed but there are still others up for grabs. You can check the availability in the post below this one.

So, how did the jumbo box break out, you ask? Had this been 1992 instead of 2009 I am quite sure I would have been elated to break this particular box. Firstly, trying to build a 700-card set was what the hobby was all about back then. Chasing patches, short-prints, variants, printing plates or whatever else it is people today desire would have been insulting to most collectors. It is amazing to me how the hobby has changed since I first started, but, for the most part change is good.

I won't keep the suspense building to whether or not I pulled what I was looking for. I will tell you that I had a brief shot of excitement when I first started to unveil this card but, alas, it is missing one key ingredient ; 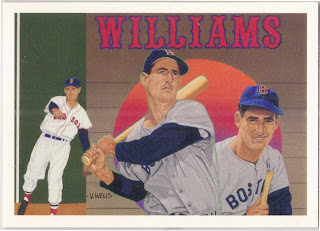 NO SIGNATURE!!!
Two other Ted Willams cards accompanied this one out of the box. One is a holographic version of the above card and the other was one of the 'Baseball Heroes' insert cards marking Ted's inclusion in the 500 Home-run Club. 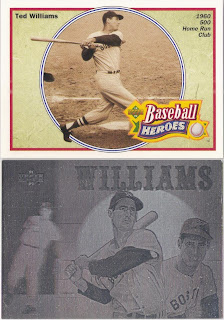 One of the cool things about revisiting some of the older sets is learning or sometime re-learning something about the set. I had forgotten that these early artist cards were drawn by Vernon Wells Sr. and being a Jays fan it was extra special to appreciate these cards again. These are truly some of the nicest artist cards I have ever seen. Here are the others from the box. 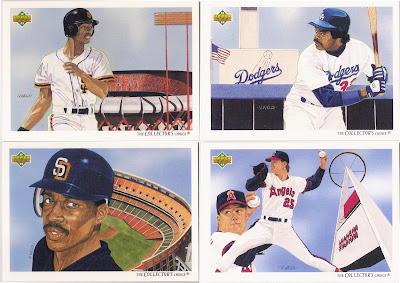 One of the things Upper Deck had on their side in the early years was that they brought a new life to the photographs used on the cards and they also used photos on both sides of the cards. Two cards I pulled in particular used a triple-exposure effect rather nicely. Card #333 belongs to Jose Canseco and card #424 belongs to Ken Griffey Jr. 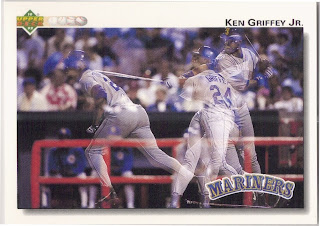 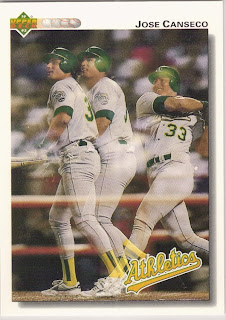 Speaking of Junior, when you are the spokesman for the Upper Deck company you tend to pull a little weight when it comes to decision making. One of the clearest examples of this is this card ; 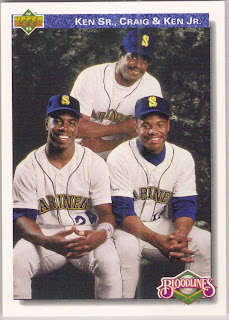 Including this issue, Craig Griffey had 5 different cards issued throughout his minor league career. One of them I am actually looking for is from the 1995 UD Minors set, it is a part of another collection of mine. In looking up the ultra-lesser-known Griffey I came across this article from 'The Priceless Pursuit'.

For those of you who have already claimed teams I thought I would let you know who had the most cards and who had the least cards from this box. The highest number of cards goes to the Seattle Mariners with 26 and the lowest number was a three-way tie between Detroit, Toronto and the New York Mets with 12 cards each.

I had mentioned earlier that had this been 1992 I would have been pleased with this box break. One of the reasons was that I pulled one of the better rookies in multiple which I am sure will make 'All Tribe Baseball' happy. 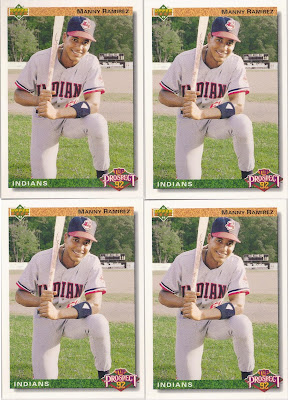 Going through the players who were around in 1992 was a nice trip as well. The best reminder was just how special it was to watch the Milwaukee Brewers back then. Yes, the Milwaukee Brewers were special at one point. Not only were they in the American League but they had this future HOF duo suiting up every day. Sure, Jeter and ARod are a dynamic duo but I would take these two over them any day, any decade, anytime. What a treat indeed ; 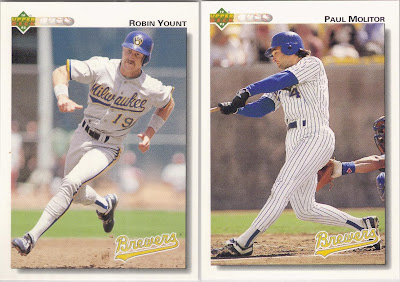 What would a baseball card retrospective post from 1992 be without Mr.Home-Run King? Sorry, I don't mean the "true" king Henry Aaron, I mean Barry. The stats on this card list Barry as being 6'1" and 190lbs, pretty decent for a major leaguer. He's smiling and happy, almost looking like he is enjoying himself. The back of this card is what is "rare", it shows that Barry once did have a sense of humor, or, at least didn't take himself so seriously. 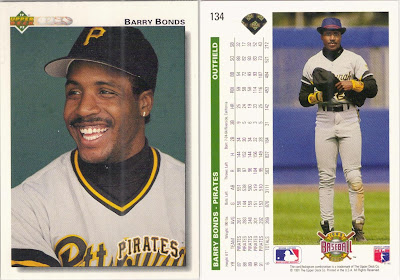 Lastly I am going to finish with a few cards that caught my eye as I went through the packs. Some of the more interesting photos as well as some seriously dated images as well.

Here's Otis Nixon in a pose that, back in 1992, proved to be quite prophetic on the part of Upper Deck. The last at-bat of 1992 ended with Nixon like this and Mike Timlin flipping the ball to Joe Carter!! 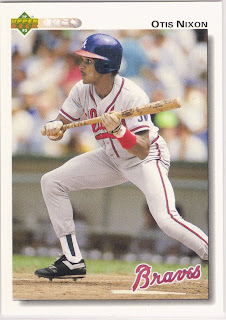 Another Brave from that year I just had to post was Lonnie Smith. Never has there been a better representation of the hi-top haircut. Awesome-90s-ness!!! 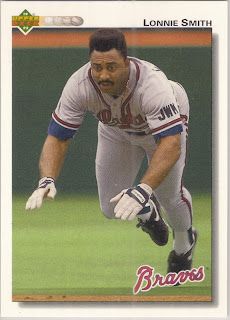 I have no idea what Greg Gagne is trying to do here but this may be one of the most disturbing cards I have ever laid eyes on. The only thing that would save this card is if he jumped 10 feet in the air to snag a line drive. Still, there must have been a better file photo of GG. 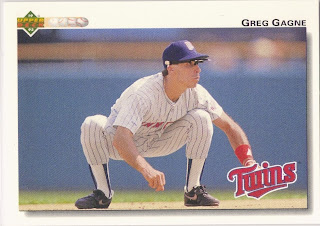 Ramon Martinez does perhaps the best impression of Reed Richards that has ever been captured on cardboard. 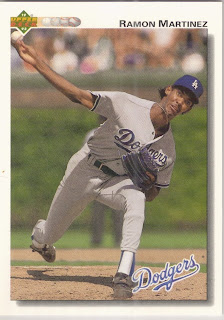 Finally, what is the one recipe that could make a baseball card legendary. How about an All-Star player, A legendary figure from the world of sports, a lawn chair and a water bottle. Well, if that is what it takes then Upper Deck delivered back in 1992. I don't think we will see Prince posing like his Pa, ever! 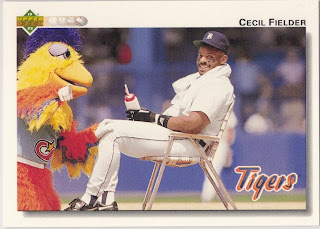 I hope you enjoyed this quick run through the year 1992 brought to you by Upper Deck. I will be busting the regular pack box tonight as I watch my winless Toronto Maple Leafs remain such at the hands of the New York Rangers. Perhaps Ted Williams will be making an appearance tonight.