Recently I have been enjoying some success at the hands of my other favorite pastime, sports wagering. Normally I am pretty good at limiting myself to what I buy when it comes to cards. I tend to hover around the flagship releases and try to stay away from the more "hit oriented" releases. While I was in the local hobby store to pick up my Topps U&H order I decided to splurge and grab a couple packs of 'SP Authentic'. 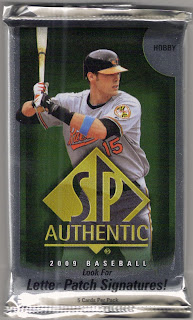 I have read some glowing reviews of the product and decided there would be little harm in seeing what it was all about up close and personal. I have mentioned on here before that I am not one to purchase a product solely to chase hits and it would seem on the surface that this product is designed for that purpose. When only 40% of the base set is un-gimmicked and the rest are SP'd or serial #'d then in my mind you are not catering to the set collector. The lure of pulling an autographed buy-back of Derek Jeter's 1993 SP rookie card is great but once again, not for a set collector.

So, what did the two packs I bought produce? Here's a look.

The base cards are nicely designed and thankfully feature the player most prominently. For me, in a higher priced product you want something different in design, something a bit more artistic. The card stock is nice and sturdy too, once again it is something I would expect at this level. 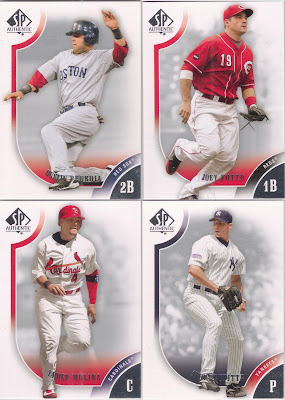 Pack two had the base cards of Derek Lowe, Ichiro and Carlos Zambrano (yay Cubs!!).

Now for the EPIC FAIL part of this release. Upper Deck, I understand the monumental task of releasing a self-congratulatory 2500 card set celebrating your existence for 20 years. Everybody loves a birthday. However, when you take away from me a card I WANT to buy and replace it with a card I could not care less about if I tried, and to add insult to injury put it inside a pack where the price-per-card is over a dollar, you tend to PISS ME OFF!!! Nothing does wonders for a companies image more than making your consumers feel like you are insulting them. I don't care that I got a card of The Golden Bear, because I also got a card of some jag-off. 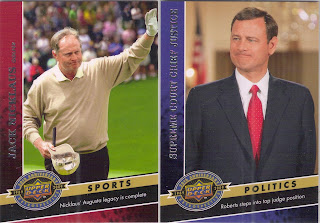 Lastly I get to the "hits" of the packs. The first card is an excellent design and depending on the checklist could be a nice little set to put together. I got a 'Platinum Power' die-cut insert of Josh Beckett. The name is a bit hard to read on the top banner but other than that it is a nice looking card. Secondly, I pulled one of the cards that I have still to form a solid opinion on. I am still on the fence over these manufactured patch cards. The fact that they are autographed is a definite plus but the awkwardness of the card and the small signing make for a pretty dull and potentially crappy looking autograph. I guess the low serial number (#/30) should make it more appealing but I am not sure it does, at least to me. I pulled an autographed manufactured patch of Jon Lester numbered 4/30. 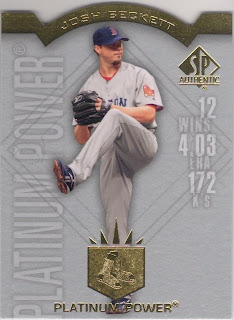 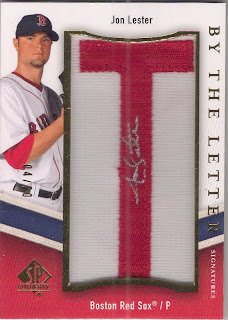 Ultimately, SP Authentic is not a set I would recommend for the set collector. It works well for the player collector or the hit-chaser but other than that it is not what I would term a great set. As for the ridiculous 20th Anniversary annoyances, Upper Deck has unleashed a gigantic fail upon collectors , and reinforcing that fail with every release makes me wonder what kind of impact it will have next year when Upper Deck struggles to claim their share of the market.

To end on an up note while I was opening these packs at the hobby store a guy beside me pulled an auto'd rookie patch that I was interested in and managed to get it from him for a few bucks. One less Ricky Romero card for me to find now. However, correct me if I am wrong but does each rookie patch card have 11 variations spelling out 'SP Authentic'? If so I have a little bit of searching to do. Yikes!! 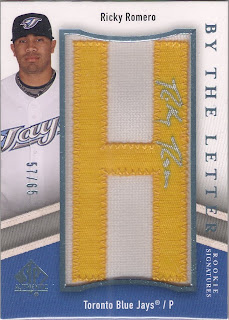