It has been about six months since my return to the hobby of sports card collecting. So far, It has been an enlightening journey through what has happened over the last 13 years and a bit of a challenge to become accustomed to the "lay of the land", so to speak. Everyone listed on the right side of this blog has played a crucial part in my re-education and I thank you. Some I have done so personally, the rest I will in the coming days.
When I decided to begin collecting again I made a pact with myself that I would practice considerable restraint for the first year. The last thing I wanted to do was to completely overwhelm myself by purchasing anything and everything available without some kind of idea as to what I was looking to accomplish this time around. So far, I think it has been somewhat successful. I currently have 3 hockey sets needing completion and 4 baseball sets, not to mention insert chase sets.
One of the habits I started to develop near the end of my previous stint as a collector was buying random packs of cards. I would purchase packs not for the purpose of collecting the set but rather as a need to open something, anything. Sadly, I think this monkey may have discovered its old nesting ground on my back. Thus, I give to you, Impluse Buy #1 ;

I honestly have no idea what posessed me to buy this pack. I have no intention of completing the set. I guess I was just itching to open something. It is now April 2nd and I only have 5 packs of Heritage under my belt. The stuff is NOWHERE to be seen. I have a sinking feeling that the Wal-Marts here only stock hockey and pokemon.
A pretty decent looking product with an impressive looking "throwback" design that is truly appealing. The three "regular" sized cards I pulled were nothing spectacular, but I did manage to get a 1:8 rookie of Simeon Varlamov. Chris Drury and Tony Esposito were the others.

The two minis are pretty sweet and if it were not for the Topps T206's coming out I would be seriously considering trying to complete them. I pulled the parallel of Anze Kopitar ; 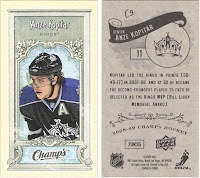 And I pulled one of the insert parallels. A brown-back of Dwayne Roloson ; 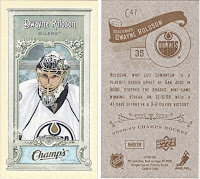 All things considered I like the set but it might be one of those things that takes a bit of labour to complete. From what I understand the retail issue is a bit easier on the wallet than the hobby but it is missing some of the higher end inserts. Maybe I will keep an eye out for some ebay lots but I think this release may be ignored by me.
If anyone is collecting the Champs set and needs any of these, feel free to send me an e-mail and we can work out something. If anyone has any of the Gretzky or Phaneuf cards I'd be willing to make an offer.
Email ThisBlogThis!Share to TwitterShare to FacebookShare to Pinterest
Labels: addiction, impulse, spend