Here we are chasing down the remaining days of February and I have yet to post anything. Suffice it to say I have been busy but that hardly excuses me from negligence. In the coming days I do hope to have a few product review box breaks as I have been told they are on their way. I also plan on beginning to chronicle my collecting adventure for 2012.

More on that at a later date.

What brings us all here today is another installment of my quest to complete my patchwork collection of Topps 'American Pie'. When we last left I had received a generous helping from Cardboard Connection Radio listener, Lou. What I did not share with you was the stack of 'Hollywood Walk of Fame' cards that Lou sent that put a big dent in my AP Wantlist. I got wayyyy too excited about "Shiny Zappa" and all focus was lost.

The 'Hollywood Walk of Fame' set is a 50-card set featuring an impressive checklist of Hollywood's greatest celebrities who are also featured in the base set. There is also a manufactured patch version of this set which has the star replaced with a stitched version of the star stuck into a cutout recess in the card. The manufactured cards are numbered out of 50. For ease of completion I simply chose to go with the regular cards.

One of the nicest features on the back of the cards, besides the write-ups on the individuals, is that the date of the dedication ceremony and the address location in Hollywood of the star itself are printed as part of the "stats" under the name of the card subject. Nothing like making a trading card purposeful.

The design of the front of the card is simple and effective. The star, as it appears on the 'Walk of Fame' is featured on the right half while a photo of the card subject takes of the left. My only issue with the card set is the lack of consistency in the photos. The use of black and white pictures makes the cards look much better than the photos featuring colour. I wish Topps had made every photo black and white. Other than that, 'Hollywood Walk of Fame' is a set that looks great paged in a binder.

10 more cards were knocked off my HWoF wantlist thanks to Lou. I scanned them as two separate groups to attempt to show you what I mean by the B&W v. Colour photo use. As far as I am concerned every single one of these guys is light-years beyond in the "coolness" department than any celebrity walking the face of the earth today. 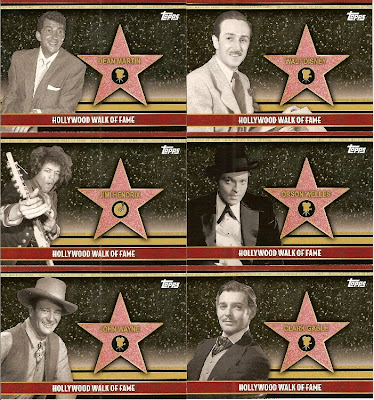 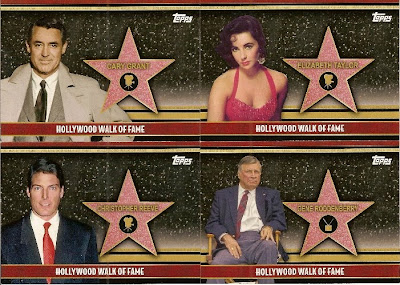 Another donation of Pie came to me via the command center in Fairfax, Virginia otherwise known as the domain of the curator of 'Stale Gum', Chris Harris. Any time you get a package from Chris you have to open it with care as the potential to be "bipped" always exists. Thankfully, this Canadian was spared. However, what was inside really made my day.

I'm winding down in the number of base cards I need and besides the Frank Zappa/MTV card there is only one other card from this set that I truly MUST have, and wouldn't you know it Chris sent it my way.... 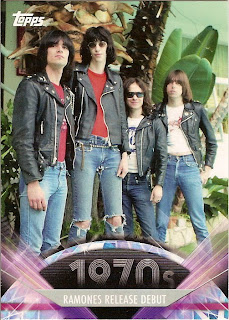 Perhaps someday we might even see a Topps product that incorporates a Joey Ramone cut signature into it. If that were to happen it would cause a serious dent in my bank account, just saying.

One of my other enjoyments in the sporting world is horse racing. I grew up with my father enjoying horse racing and it is one of the enjoyments he has passed along to me. When I saw that Secretariate had a card in American Pie I new it was going to be part of my patchwork set. This is a beautiful card of a beautiful and amazing horse. 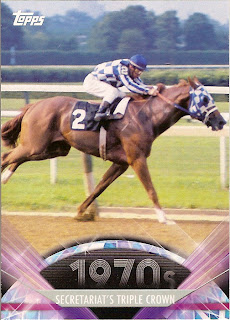 In an effort to make my completion of my 'American Pie' collection a bit of a challenge I have decided to tray and collect both parallels of each of the base cards I am seeking. Chris was kind enough to send along a handful of shiny goodness to help the cause.

Miracle on Ice, Mr. Rogers and Genomes
Perhaps the most challenging part of this collection will be the "spotlight" parallels which are serial numbered to a relatively meager 76 copies. The first one in my collection accompanied its shiny partner in this package. Card #99 features the godfather of 'The Godfather', Mario Puzo. 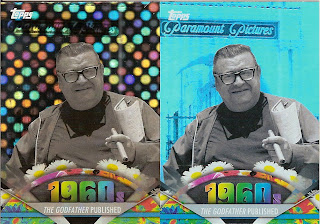 Chris also saw fit to knock another card off of my 'Hollywood Walk of Fame' wantlist as well. As the host of one of the greatest television shows of all time his place in pop culture was set. To go on and host an even more interesting yet less popular show in the 60's, Rod Serling was a part of my growing up and will always define "hip", for me. 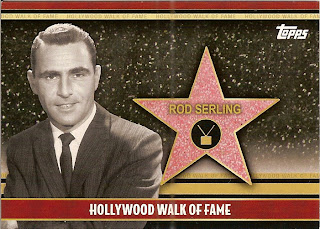 'Night Gallery' was one of the first shows that I "discovered" as a young television watcher and I can remember sneaking into the basement to watch episodes on an old black and white television we liberated from my grandmother.

In a rather short period the generosity of fellow collectors has helped me eliminate a majority of my Topps 'American Pie' wantlist. If you have any of the cards listed in my original post that I still need, and you have no use for them, please send them north and I will gladly change them into something you want.

Thanks for taking the time to check out yet another post devoted to PIE and stay tuned for several box breaks coming soon to the blog.