Another Helping of Pie 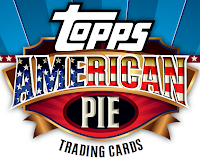 When I first posted my wantlist for Topps American Pie there were two rather quick respondents to my request. The second of which showed up in the mail this week from my fellow host of Wednesday Night Cardboard Connection Radio, Rob Bertrand, better known to all as The Voice of The Collector. Rob absolutely killed my wantlist as I am now down to needing/wanting only 5 base cards. However, one card that is proving to be far too elusive is the one that features Francesco Vincent Zappa.

Most of the images from American Pie have been seen several times over so I will not bore you with scan after scan of the cards I received. But, I will show you two of the cards I am happiest to have in my possession.

Card #109 - George Carlin
My main focus of collection for 'American Pie' is the Hollywood Walk of Fame 50-card insert set. Rob sent along 8 cards to help shrink my wantlist for those cards as well. The coolest part of this set is that the street location of the star in Hollywood is printed on the back along with a short but concise biography of the subject on the front. A nice touch. 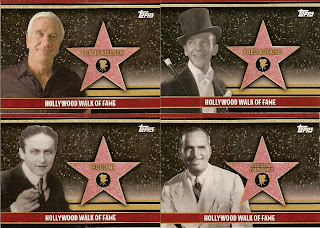 The black and white photos really work on these cards and give them the old time look that fits the historic nature of the set. Harry Houdini is one of 9 Walk of Fame stars to have their one-word stage name grace their star. I love trivial facts like that. 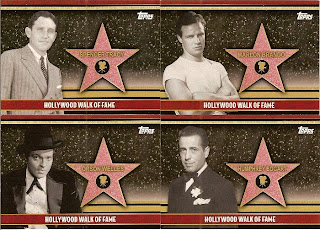 #HWF-34 Spencer Tracy, #HWF-26 Marlon Brando
#HWF-33 Orson Welles, #HWF-16 Humphrey Bogart
If you have not picked up a blaster of 'American Pie' yet I would suggest you do so. Not just to enjoy the product and the cards you get but also you may be able to help me finish up my set as well. That would not be such a bad thing, would it?

Thanks Rob for the trade and getting me closer to the finish line.

If anyone else is trying to complete 'American Pie' hit me up with your wantlist and I might be able to help you out. Thanks for stopping by.