One of the more enticing and exciting aspects of The National I was looking forward to was the fabled "Quarter Boxes" that I have long heard about but have never had the joy of experiencing first hand. I have seen the videos and heard the stories of numerous wonders discovered in these beasts. As a matter of fact, I even saw with my own two eyes one of the wonders of the 2011 National Quarter Box hunt that was claimed by Chris Harris over at Stale Gum.

Sadly, for this NSCC Rookie, there was simply far too much to see and do at the Donald E. Stephens Convention Center that I never truly had the time to troll these deposits of wondrous discovery with the proper focus and respect they deserve. I did get to spend around 40 minutes on Sunday morning at the table of one dealer. I came away with out $20 worth of singles and inserts that will complete some sets and spark the quest for completion of others.

Out of the total money spent I have decided to show off what I feel to be the best $1.00 I spent on my maiden voyage into the abyss that is "The Quarter Box".

The first card goes toward my completion of my 1979 Topps Toronto Blue Jays Team set. Garth Iorg is hardly the feature of this card but it IS one of those great Topps-isms that place a player you need on a card with a player that "makes" the card. By no means is it unattainable on the regular market but when you can take home a Rookie Card of perhaps one of the most consistent players ever and one half of arguably the best infield combination ever for a quarter, you do it. 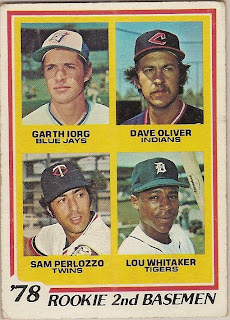 Being a Canadian this next card made absolute sense when I first saw it. When I saw it again I thought; "Why Not?". When I saw it for a third time I new it was meant to be. That is right, I brought home not one..... 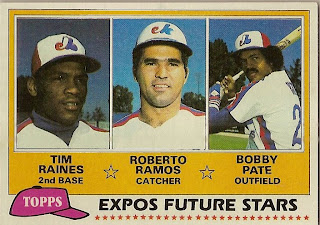 Yes, three copies of Tim Raines' 1981 Topps Rookie Card. If you have to ask then I will never be able to explain it to you.

My plan for 2012 in Baltimore is already taking shape and I plan to venture back to these Quarter Boxes for sure. This time, I will be better prepared and have much greater respect for these behemoths of the hobby.