Mail has been rather sparse the last while but there are a few packages that I am rushing home daily in hopes of being greeted by them at the door. Today was one of those days where there were 4 envelopes sitting on the kitchen table and they were that familiar yellow colour that collectors have grown to love.

Three of those envelopes helped knock off one of the counters on my sidebar over there to the right. Well done Topps!!! 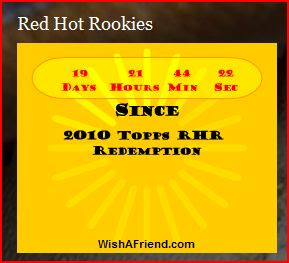 Compared to the 2009 versions of the Red Hot Rookie cards released in Flagship Series 3/Updates & Highlights the 2010 version of these cards look much nicer. Unfortunately, if early reports are to be believed, Topps will not be doing RHR Redemption cards in 2011. Kind of disappointing but not a tragic loss.

Two of my redemptions were of the same player....... 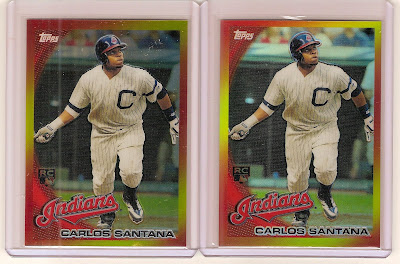 The third card I received today was of a Philly...... 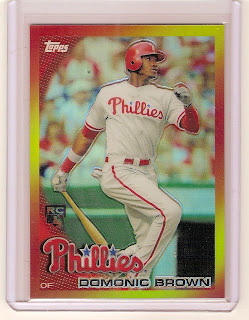 Like I said, the design of these cards are the best of the last two years, and seeing as I have only been back collecting for two years, I have a pretty narrow frame of reference. These cards are a nice addition to a product that is usually a forgotten issue by the time it rolls around As well, this is a case where redemptions work. It is a nice fun feeling as a collector to be able to wait and watch as the "mystery" is revealed as to who your card will be, plus, coming home to an envelope in the mail is never a bad thing. If these are truly gone for 2011 I will miss them for sure.

As for the fate of these three cards, if there are any Indians or Phillies collectors out there that have a Starlin Castro that needs a home in Canada I would love to hear from you.

Until the next time we can eliminate a counter from the blog I leave you with the theme song of this segment.