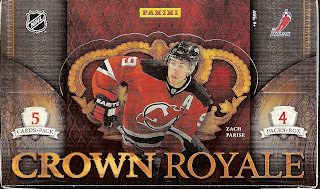 The very generous folks at Panini sent me a box of Crown Royale Hockey to have a look at and review just for you. So before I go any further I would like to say thank-you to Tracy Hackler for providing this to me and I appreciate the opportunity.

Seeing as this is my first manufacturer provided product review I decided to take the next logical step in box breaking and record a video break. Please let me know how I did and how I can make it better. Practice makes perfect but feedback is more than welcomed.

As always before we break into any kind of box here we need the proper atmosphere. Today I decided to go with a band that can make any Sunday feel like a Saturday.

Firstly, what makes this product fun to open is that there is a hit in every pack. Be it a Jersey Relic, Autograph or Auto/Relic the anticipation greeting every pack is pure enjoyment. The complete set consists of 175 cards divided into 3 "sets". Cards #1-100 feature the currently active NHL stars and are essentially the "base" set. Cards #101-115 are entitled 'Regents' and features the Greats of the Game. Cards #116-129 are the absolutely stunning 'Rookie Silhouettes Signature Prime Materials' cards. While that is a mouthful to say I think that these 14 cards focusing on the Elite rookies of 2010-11 are the absolute signature of this release. Cards #130-175 are the 'Rookie Royalty Signatures' cards that encompass the remainder of the rookies.

The base design is the Crown Royale design that Pacific made famous. The die-cut crown is there, the shiny foil is there, the design that collectors either love or hate is all there. The one nice touch to the design is that the background colour of the card is set to match the team colours of the player pictured. A small detail but something so necessary when it comes to visual appeal. A couple things I would have liked to have seen on the base cards though is a little more space used for the player and team names and the team logo. Yes the logo is on the player jersey, for the most part, but it still needs to be an element on the card face.

Another feature that would have worked well would have been having the player image raised on the card. Some of the photos of the players in their road uniforms get lost in the card background. 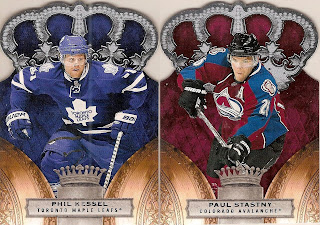 The card backs are nicely designed and DO feature team logos but they are a bit small for the room provided. The other drawback is that there is only one line of stats. Minimum rule for card backs when it comes to stats should be up to 5-years previous with a career summary. Other than those minor details very little to complain about the base card design.

As is always the case there are parallel cards that can be chased. There are 6 different versions of the 100 base cards;

When it comes to the Insert sets, once again, there are more than enough to keep the most ravenous collector satisfied while not completely overwhelming and alienating both Master Set and player collectors. Altogether there are a total of 9 insert sets with varying degrees of parallels. 5 of those sets have no parallels.

Of the 4 cards I pulled none were of the Jersey, Patch or Auto parallel kind. The first card is from the 'Living Legends' set. Card #6 - Patrick Roy. 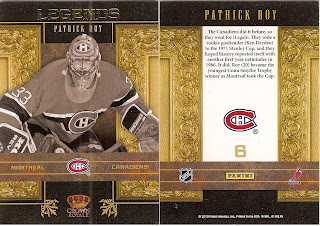 I like the looks of this set. The black and white image of the player manages to stand out in this design. A bit of a questionable checklist for this set but I imagine that rights have a major role to play in that so not a big deal.

The second insert card is from the 'Lancers' set. This set seems to honour the more offensive minded players in the league with powerful shots. I pulled card #6 - Teemu Selanne #131/250. 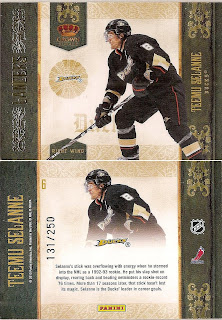 This set for me was met with a big "Meh.". The design itself makes the card feel cluttered and crowded. Looking at the checklist this could have easily been a a 10-card set rather than 25. The reuse of the same photo from the front of the card on the back does no favours for this card either. Not my favorite of the bunch. 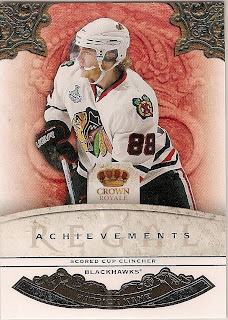 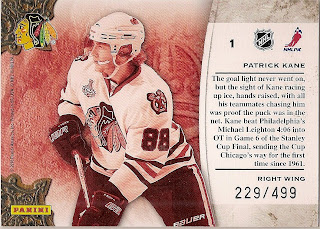 Everything about the design of this card works. It is appealing to look at and even though the photo reuse on the back still happens it is blended into the design of the card much better than the previous example. The checklist for this set is much, much stronger as well. This is a set that I would consider chasing.

Unfortunately my joy is short-lived. When I saw this set on the sell sheets and Panini's 'Sneek Peeks' on their website I got excited and was looking forward to seeing it in-hand. What was potentially another winning insert fell flat. I pulled an 'In Harms Way' insert card #2 - Pekka Rinne #266/299. 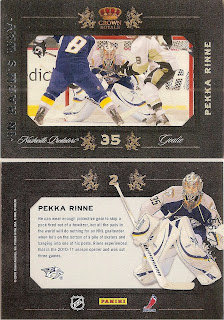 My disappointment with this set stems totally from the fact that I built up in my own mind what I thought this design was going to be. Seeing the colour image surrounded by the dark frame I was expecting an insert set reminiscent of Upper Deck's Masterpieces collection. Goalie cards are truly some of the best photos in any sports release and when done right they can be made to look spectacular. Using the near ice level perspective of these photos in this set, recessed into a replica frame would have made this set a must have.

Now we get to the meat of the box. The four hits that are guaranteed to be at least 2 autos and 2 relics. Included amongst these cards is the other half of the "main set", the 'Rookie Silhouettes Signature Prime Materials' and the 'Rookie Royalty Signatures'. In watching several breaks online I have seen a few of the Silhouette cards pulled and these things are beautiful. The card features an over-sized swatch of material or patch tucked under a die-cut image of the player. Words simply do not do these cards justice. I saw a Brayden Schenn pulled from a pack and my jaw just dropped.

The relic and autograph insert sets have a couple variations on them as well.

I will start off right away by saying I was not lucky enough to pull a 'Rookie Silhouette' but what I did end up with made me extremely happy and defined the "fun factor" of this break. Being able to pull a hit per pack definitely ups the cost of a product but it also raises the excitement level too. With Crown Royale I think Panini did an excellent job packing value into a 4-pack box.

The second hit is one of the 'Rookie Royalty' autograph cards from the main set. Card #133 - Sergei Bobrovsky #205/499. You can never go wrong with on-card autographs. EVER!! 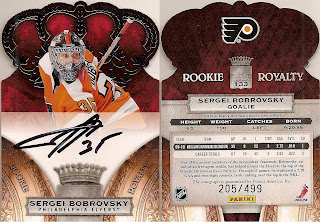 Hit number 3 is from the other set that I was extremely excited to see in-hand. When I first saw the design for these cards on the Panini website I had high hopes. About as high as I did for the 'In Harms Way' inserts. Thankfully this set did not disappoint in the least. The 100-card checklist makes it a HUGE challenge as does the varying number of each card. I have seen some numbered /50. The one I pulled was #053/100.

The final hit of the box is disappointing in only one facet, it is a sticker auto. Now, I understand why it is a sticker auto, simply there is no place in the card design for an autograph. No problem. However, being serial #'d out of 50 this should have been a much more exciting card to hit. A great player with a tonne of upside so do not think I am complaining in the least. I am simply just telling you how it felt to pull the card. Card #JT #21/50 is an Autograph/Jersey 'Heirs to the Throne' of John Tavares.

Overall I would have to say that Panini Crown Royale Hockey is a very enjoyable product to break. If you are a hit chaser then it has everything you could ask for, the chance at some beautiful cards that will definitely hold their value and the off chance at some true works of art that should be on every list when it comes time to talk card of the year.

There are a few minor elements that keep this set from being an out-of-the-park Homerun but for the $90-$110 price tag that this will set you back, they will not deter one bit your enjoyment of this product. Sticker autos vs. on-card is a debate that will rage long into the future. Expectations about design not being met is a fact of collecting. The goal of everyone involved is to produce the "perfect" set but rarely if ever is that achieved.

If you are a player collector or a hit chaser then Panini Crown Royale should be a product you bust. If you happen to hit one of the Silhouettes you will NOT be disappointed.

Finally, thanks again to Panini for providing me this box to review and stay tuned to the blog in the coming days as I will be working out some way to get these cards into your hands.

Playing us out, as always here at LFB2B, is our musical guests. This time the Detroit Cobras bring it home.