My main purpose this time around at the Toronto Sport Card & Memorabilia Fall Expo was to take in the corporate atmosphere and participate in as many wrapper redemptions as possible. Far too many amazing card were dangled in front of collectors and I felt the driving need to acquire them gnawing at me.

However, before I get into them, I noticed I was neglectful in posting a scan of the program provided faithfully via snail mail, twice a year, promoting the Spring and Fall shows. 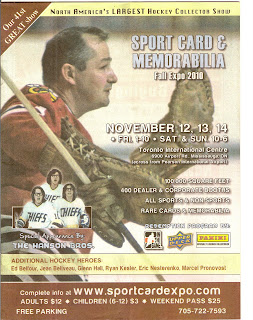 One of the players I was on a quest for on Saturday was Edmonton Oiler, Jordan Eberle. I really enjoyed following his career through the O.H.L. and have slowly but surely become a fan of his. The next natural step, of course, is becoming a collector of his cards. The problem is, when the player you like is on everyone else's radar screen it becomes rather difficult to get the latest offerings so soon after their release. Case in point is this card....... 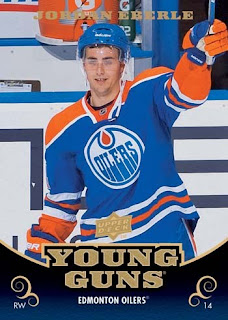 .......Upper Deck Series 1 Card #220. In the Hockey Card world the 'Young Guns' RCs are considered to be THE Rookie Card to have. This particular card was selling for $80 on the floor of The Expo. To make things more trying there is also this card....... 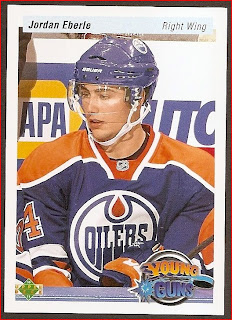 Now, when I capitalize how popular Upper Deck's redemption program is, it still does not convey it properly. The last time I was a part of this program you needed to line up about an hour and a half BEFORE it was scheduled to start as the redemption only runs for 2 hours per day. Needless to say by the time I made my way to the line it was well beyond what I had hoped to see and I knew the chances of me making it through before the end were very slim. Fortunately for me, the few who had attended the 'Collectors Roundtable' earlier that morning received a greatly appreciated "Thank-you" gift, our own packed 'Priority Signings' penny sleeve.

Sandwiched between these two cards....... 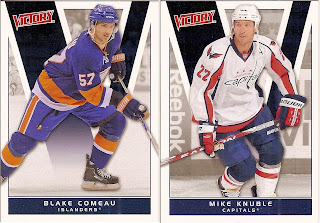 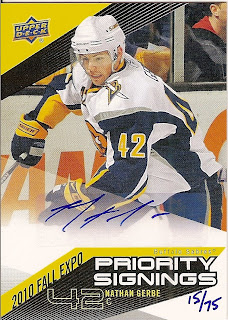 Jordan Eberle was not a part of the 'Priority Signings' checklist but there were definitely some names I would have loved to have added to my collection. The best variation discovered from the show was that there were two versions of Gordie Howe's card. One featured him in a Red Wings uniform and the other featured him in a Hartford Whalers uniform. The Whalers version was numbered out of 3.

I still plan on opening some UDS1 in order to chase the Eberle 'Young Guns', but the money I had set aside for this redemption ended up being spent on a different Upper Deck product that has captured my attention. The subject of which will be a taken care of in a later post.

ITG's Fall Expo exclusive card set was a daunting 45-card set handed out in 5-card packages, 1 per gift bag. I received cards numbered ITG-08, ITG-11, ITG-23, ITG-39 and ITG-43. I may look into the feasibility of actually trying to put this set together but I have a feeling it may prove rather time consuming. Here's a look at the cards I have. 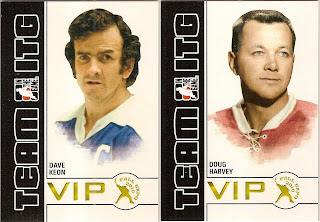 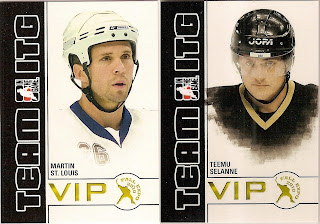 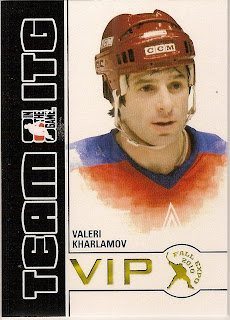 The Kharlamov card made me real happy. I have always liked Russian players, especially the ones who could give any talented Canadian a run for their money.

The final "freebie" from ITG was a chance to spin the prize wheel. You had a shot at one of three prizes; A pack of cards, a random bobblehead figure or a single spot on the wheel paid off a Blaster Box of 2007-08 'Heroes and Prospects' - Arena Version. Guess what yours truly landed....... 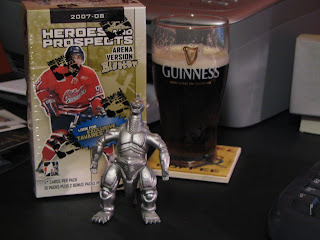 I am planning on ripping the blaster while I learn how to use UStream at some point soon.

'In The Game' had some really nice sounding wrapper redemption programs running at the Fall Expo but the products I would have liked to have opened were too far out of my current budget. Maybe next year.

Last, but definitely not least, were the wrapper redemptions and challenges from Panini. I spent the most time, and perhaps arguably too much time, at their booth. Scott Prusha and the other representatives from Panini had a continual exciting vibe going all day long. It did not hurt their efforts that there was one Expo goer who was opening case after case of 2010-11 Panini Certified Hockey.

Panini's wrapper redemption program was one Expo Exclusive pack of cards per box of 2010-11 Score Hockey or 5 packs of any other qualifying Panini/Donruss/Leaf product. Inside the packs were cards showing off the upcoming Donruss Hockey release from Panini. Randomly inserted into packs were autographed cards, patch cards, autographed patch cards, serial numbered cards out of 5 and a whole bunch more instant win cards. To top it all off they had included the very player I had decided to chase at this Expo in their exclusives. 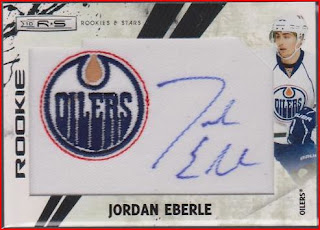 I opened up two boxes of Certified Hockey, trying not only to finish my base set but to hopefully find one of these....... 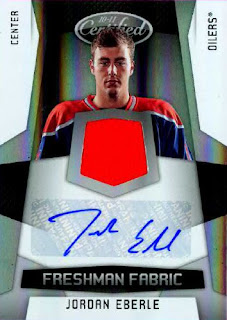 .......sadly, I was thwarted yet again. Not to worry, I had 4 redemption packs to rip and I knew, I just knew, that I was going to come away with something exclusive to add to my collection. The Donruss cards look pretty slick and the retro 'D' definitely looks good back on cardboard. Out of the four packs I pulled these.......

A Trifecta of Ryan Millers 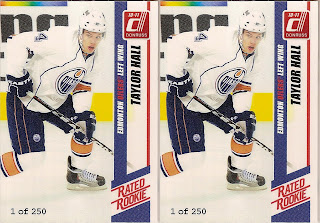 Finishing off the Donruss cards I have a couple of Leafs. Jonas Gustavsson and Nazem Kadri....... 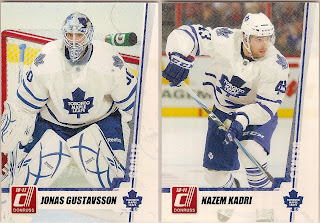 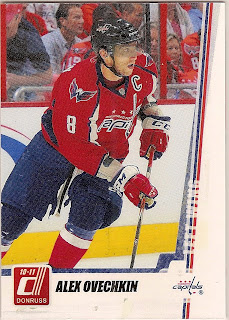 I am not sure if there has ever been a point in hockey where two players have emerged on the scene and polarized fans as much as Crosby and Ovechkin. Very rarely have I spoken with fans who like BOTH players. They are Hockey's version of "The Beatles or The Rolling Stones", "Coke or Pepsi" or "Ginger or Mary Ann". Truly a good time to be a fan.

Now, let's get a look at the inserts I pulled from the redemption packs. The very first one I opened felt like it had a pretty thick card inside. I was hoping and praying it was what I had come to Panini's booth for. As I peeled away the card on top....... 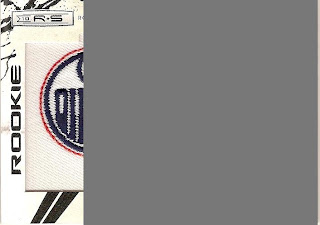 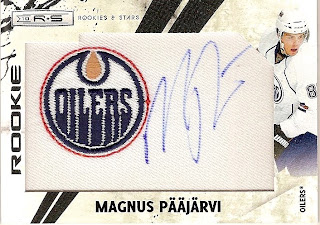 .......aaarrrgghhh!! DENIED!!! However, if I had to get another Oiler player then Magnus was the one to get. He may have quite a ways to go in becoming a two-way player but the upside on this guy is big. Admittedly I know very little about him, seeing as his junior career kept him in Sweden, but from what I managed to see of him in the World Junior Championship Tournament as well as the Under-18 Tournament he can give defensemen fits when carrying the puck.

I did manage to get three of the cards that were serial #'d out of 5. Two of them went to the guy who was busting case after case of Certified Hockey because he was kind enough to see that I did not leave the Panini booth without at least ONE Jordan Eberle card. Patrick Roy and Brian Gionta were traded for this beauty of a card, serial #d 2/5. 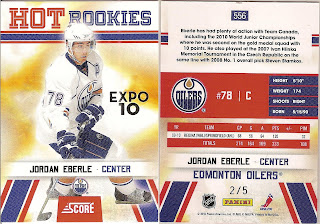 The one remaining serial #'d card is of a player and from a sport that I could not know less about if I tried. Someone beside me when I opened it said he was a decent player. I will have to take their word for it and put it to you, dear reader, to let me know who he is. 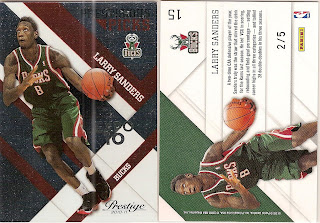 The second feature contest/event at the Panini booth was the hourly "Box Wars". Essentially collectors were encouraged to battle amongst themselves looking for a particular statistic or achievement from the cards they pulled. The BEST part was that unlike the usual box/pack wars, everyone got to keep their cards. The winner(s) were then to select a numbered card from the prize box and win the corresponding prize from the Panini Showcase sitting front and centre at their booth. There was also a Grand Prize draw for the winners of each Box War for the entire weekend, a 2010 Classics 'Classic Cuts' auto of former U.S. President Gerald Ford.

I chose to enter the "Box Wars" featuring the 2010-11 Score Hockey release. By the time the bell rang to start the fight there had to have been at least 30 people involved. The mylar was flying. The goal of this round was to be the first to pull a 'Snow Globe' Die-cut insert of a goalie. There are 3 in the set and in my second to last pack I saw this....... 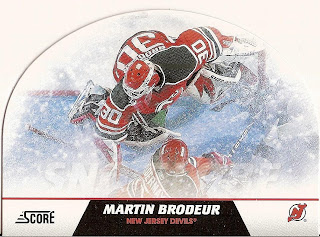 .......and staked my claim as a Panini Box Wars Champion. Only one other goalie card was found in this round so two cards from the prize cabinet were going home from Toronto. Before we chose our winning numbers though we both got a pretty sweet autographed 8x10 of Toronto Maple Leaf, Nazem Kadri. 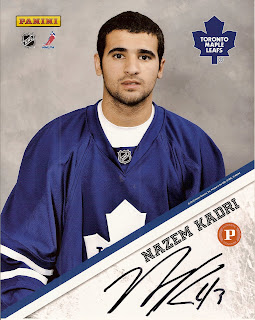 I selected lucky number 19. Lucky number 19 ended up belonging to an Emerald Green Prime patch/autograph 'Freshman Fabric' from 2010-11 Certified Hockey featuring Tyler Seguin of the Boston Bruins. Immediately one of the nicest looking patch cards in my collection. Being a 1/1 does not hurt either. Truly a beautiful card. 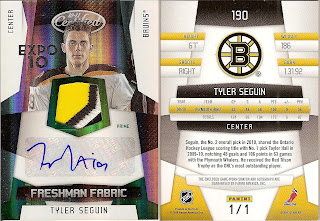 It is surprising how much time can fly when you get caught up watching other people rip boxes of cards. By the time I had finished trolling around the corporate area, talking with fellow collectors and watching some pretty amazing hits delivered by boxes, I barely had time to browse the dealers tables at the show. I did manage to find a few baseball cards that I was looking for but most of the time was spent getting an idea of who people were collecting and what the hottest product out there was.

Every single representative from Panini, Upper Deck and In The Game could not have been more inviting and kind to every collector that took the time to stop by their respective booths. Later in the day there were impromptu giveaways that drew crowds that spilled out and around the corner of the corporate area. It was really great to see the enthusiasm of everyone and to hear very little of the grumbling and negativity that seems to accompany freebie giveaways all too often.

Keep coming back as I will be covering some of the questions that Upper Deck dealt with at the 'Collectors Roundtable' that they hosted Saturday morning.