As the clock ticks down on the last few days we have left to complete our renovations on the house certain priorities have had to be shuffled. Unfortunately the blog here has been set aside in favor of learning how to install vinyl flooring. Envelopes have been piling up and the nagging urge to post their contents has been unbearable.

Mike over at BA Benny's Baseball Card Buffet and I worked out a trade for some of the Cubs cards he pulled during a Box Break of 2008 Upper Deck Heroes. Naturally he was willing to trade and so off I shipped what I hoped would make Mike happy. You can see his post of what I sent here.

What Mike sent in return was extremely generous and made me extremely happy. The first card is the one that originally caught my eye from the break. 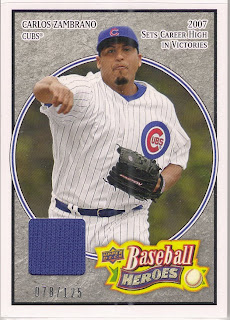 Along with the jersey were included the base cards of Alfonso Soriano and Kosuke Fukudome. 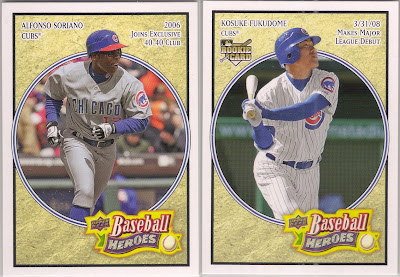 Having sent some other relics that were gathering dust on my shelves what was sent in return were definitely much more appreciated. The first card is from the 2004 Upper Deck Reflections set featuring Corey Patterson as a member of the Chicago Cubs. A nice pin-stripey swatch. 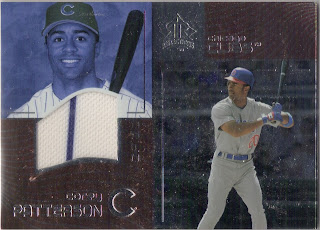 Heading into the personal player collection is a jersey swatch from 2006 Upper Deck 'Game Materials' insert set of David Wright. 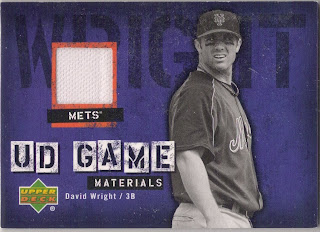 The last relic sent is from 2001 Fleer Finest and appears to be the Gold parallel version hand numbered out of 50. An awesome piece of bat from a Blue Jay who was quite popular during his run with the team. Shannon Stewart. 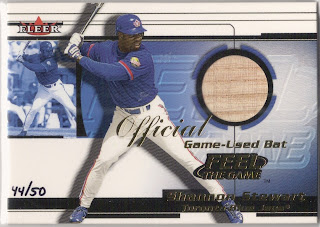 Mike also sent a handful of Cubs singles and a few of them might have me rethinking my blase stance on Topps Chrome. Two of the bunch I had to show off simply because they needed to be shown off. First, what would a Cubs card post be without "Mr. Cub" Ernie Banks? I am not a fan of the idea of the '20th Anniversary' insert monstrosity from Upper Deck, BUT, I have to say it will make for some interesting team card and player card searching in the months ahead, for sure. 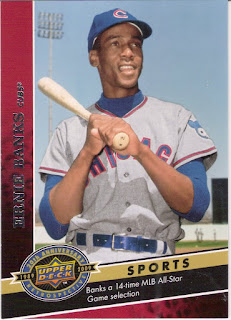 The last card I want to show simply because it is based on the design of my favorite Topps set. For me, the 1965 Topps Set is what a baseball card should look like and I am counting down the days until 2014 when Topps Heritage reaches that design. Until then I will be happy with Ron Santo's card from the 2005 Topps 'All-Time Fan Favorite' release. 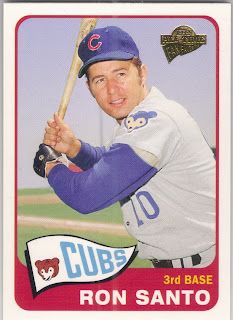 Thanks to Mike from BA Benny's Baseball Card Buffet for the heaping serving of cardboard and I will definitely be looking to knock off some more cards from his wantlists in order to trade with him again. I have many more bubble mailers to work through and will be hopefully doing so in the coming days. I am waiting on my first purchase from 'Check Out My Cards' which hopefully arrives before the weekend because there is a special card I need in there that will be accompanying me to FanExpo this weekend.