Everyone is familiar, or at least you should be, with a great blog called The Hamiltonian. It is actually the fourth blog I stumbled upon when I first started reading blogs and checking out the collecting landscape upon returning to the hobby. Its architect is a collector of anything and everything Josh Hamilton.

What you may be less familiar with is that Tricia runs another blog dedicated to her love of everything hockey. You can check it out here.

I was fortunate enough to have my entry in the 'Caption This Picture' contest chosen as the wittiest entry. On top of that it actually garnered me a prize as well. I won this SWEEEEEEET 3 colour Game-used patch, which is actually cut from the player's jersey number, of Scott Stajcer of the Owen Sound Attack in the OHL. 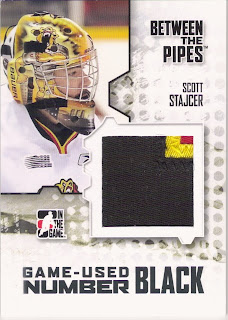 As far as I understand there were only six of these cards made by In The Game for each player in the set.

Now, for coming up with a simple smart-assed caption for a photo you would think this was a gracious enough prize. Yeah, me too. Apparently though, Tricia did not think so and included another 3-colour patch card that also had a jersey swatch. From Upper Deck 'Artifacts' I got this Alex Kovalev 'Treasured Swatches' numbered out of 25. 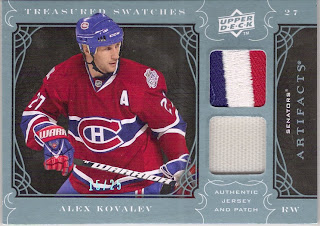 I pulled a lame black patch and black jersey swatch from the box I busted but this blows it away.

So, thanks to Tricia from The Hamiltonian AND Cards on Ice for the uber-nice cards and hopefully I can return the favor by supplying her something nice from the upcoming 2010 Allen & Ginter Group Case Break being hosted here on LFB2B that she has joined. I would love to repay her generosity by pulling a Josh Hamilton Rip-Card.