Today is rainy, cold and all together unimpressive. Just wanted to get home from work and rip open another pack in this 10-days of Topps Series 2 Jumbo Box Break. Ty Cobb is smirking at me like he knows something is up. Ty might also be smirking because he has the inside scoop on the Top 4 in my 'Top 10 Favorite Television Show Theme Songs'. I left him face down on the list, now he's gonna blog about it and spoil everything!!

Before he does though, I can at least get #4 out of the way. Everything about this show is cool, hip and solid!! It was way before my time but that is what reruns are for kids!! You get to discover stuff like.......

...and there is NOBODY cooler than Clarence Williams III.


Now to find out what Mr. Cobb is smirking about.

Suffice it to say Ty knew that today was going to be a good day for ripping packs. Although I did get shut out of Toronto Blue Jays, it was more than made up in the number of Chicago Cubs pulled in these 50 cards. Watch and see...... 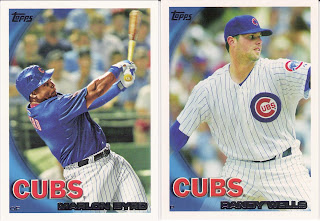 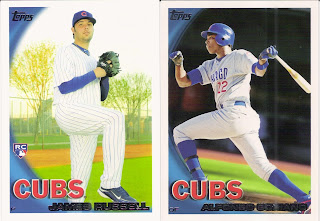 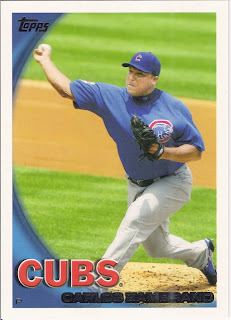 I mentioned before that some of the photo choices for the 'Franchise History' cards had me completely baffled. There were however two in this pack that make sense to me and look really cool as well. 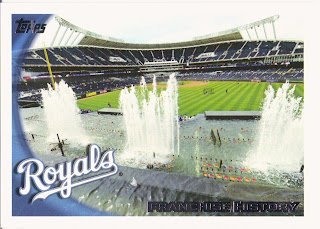 I was in KC in 1994 when Kauffman Stadium was unimpressive to say the least. It is amazing what a face lift natural grass can give something. 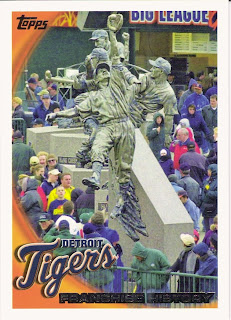 Also in this pack was the second Series 2 card to feature a player bunting the ball. I love to collect these cards so this makes me VERY happy. The player in particular here is Sean Rodriguez. 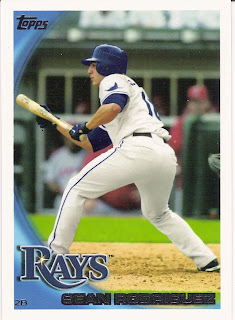 When it came to the insert section of this pack it started to get a whole lot more fun for me again. More Cubs!!! Alfonso Soriano decided to show up covered in gold with a 0340/2010 printed on his back, Raul Ibanez looks pretty spiffy in his 'Turkey Red' pose and Johnny Bench reminds all those 1970's collectors out there what his card looked like before mom got a hold of it.

The 'History of the World Series' card tells us that Enos Slaughter ran really fast in 1946, Ryan Braun looks like he is launching on in all his 3D Sportflic glory and Ozzie Smith is cheering the heck outta this pack because he knows what is up next.

We have the third "hit" of the box and we also have a jersey swatch and we also have ANOTHER Chicago Cub!!! Nothing like pulling a relic of a player from your favorite team. Ryan Dempster 'Peak Performance' Relic Jersey... 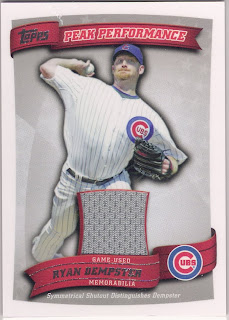 The 'Legendary Lineage' card is of Dale Murphy and Matt Kemp. Still not liking this set. And, the 'Vintage Legends' card looks like it could have been actually from the 1957 set. VLC-18 is the same guy whose card momma chucked just a little while ago, Johnny Bench. 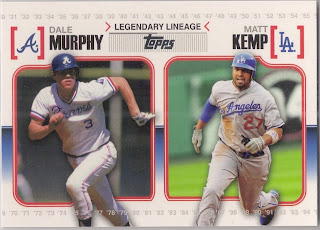 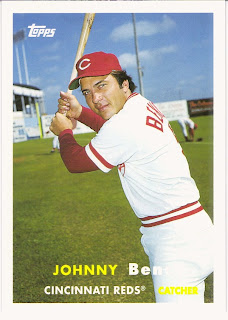 Last night everybody was caught up in 'Strasburg-mania' So much so that redemption codes were being redeemed in the dozens. I have to admit that I snuck the redemption code out of this pack last night in hopes of getting a Strasburg. I kept the integrity of this pack rip intact though as it was officially my wife who opened and removed the MCG card.

Mickey Mantle turned from this....... 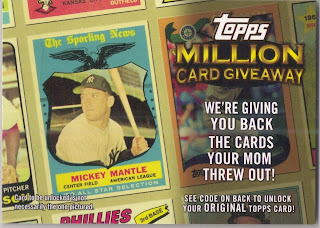 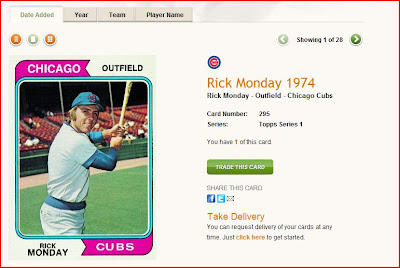 RICK-FRACKIN' MONDAY!!!!!
Not Strasburg but I don't care!!! Rick Monday in a Cubs uniform PWNS!!!!

AND, that makes for yet another Cubbie out of this pack. All totaled I scored eight Cubs with two being inserts. There was bunting-goodness thrown in for good measure and Johnny Bench x2!!!! Dustin Pedroia, please remove the "best pack" ribbon from your lapel and hand it to Ty Cobb.

This pack chased away the crappy day and revitalised me for the last three packs in this break. I am excited and looking forward to it. Hopefully you are too. I am also excited that the final three choices in my Television Theme Song list are coming up too. Tomorrow is Dustin Pedroia's last chance to reclaim the ribbon and you will also find out who #3 is in the list.