Let 'The Long Weekend' and some SERIOUS catch-up begin.....

Who would have thought that having taken a week's vacation would have brought me back to an almost three week long hiatus from blogging? Sometimes it is crazy just how much things can get in the way of what is supposed to be a relaxing and soothing pastime. Leaving two schools to fend for themselves technologically for a week breeds some bizarre firestorms that lead to numerous meetings trying to bring people back to a sense of reality and security.

Thankfully the long weekend is here and I can begin to finally reclaim my blog and get back to boring the heck out of you, faithful reader. Also lending to the neglect of LFB2B is the extensive reclamation of our home office. Anyhow, enough excuses. Let's start with some recent news, acquisitions and pack rips.

First, our trip to San Diego was everything a vacation should be. Relaxing, interesting, fun and left us wanting to return to California. Next year it looks like San Francisco or Monterey will be our choice. Petco Park is quite the site to see and even further erodes my tolerance of Skydome/Rogers Centre. 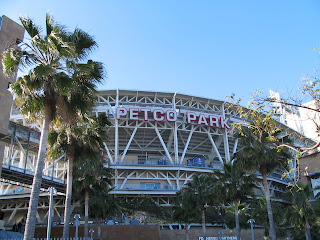 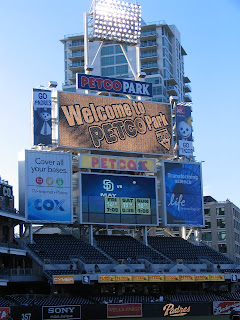 Our seats were 9 rows back of the field, on the third base side of home plate, just beside the visitors on-deck circle. The zoom lens on my camera made for some really cool photos of the action. 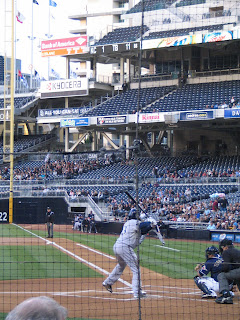 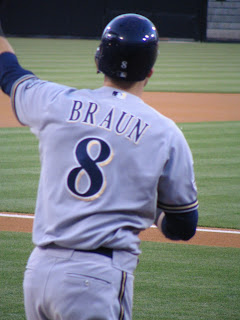 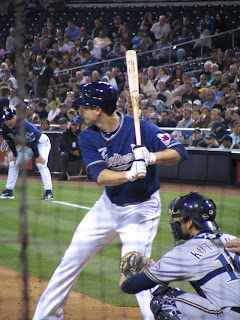 We happened to be staying at the same hotel that the Milwaukee Brewers were housed in and even had the opportunity to share the lobby bar with a few of them after the game. I am always hesitant to approach athletes outside of the confines of their "workplace" simply because I would not want to be approached were the roles reversed. Is that weird? Just wondering.

Of course, while in San Diego, one of the first things I did was look up the nearest card store. There was one listed within walking distance of the hotel so of course we made our way there to have a look. When I walked in to 'City Center Sports Collectibles' I was like a kid in a candy store, there were boxes and boxes of waiting-to-be-opened baseball cards as far as the eye could see. The inventory went back several years and it quickly ceased to be a issue of IF I would buy anything and became a question of WHAT I was going to buy.

'Sweet Spots' from 2007, 'Cracker Jack' from 2005, 'Legendary Cuts' from 2006, my mind raced. Part of me struggled with the thought of spending a large chunk of my vacation budget on a box of cards but another part struggled with walking away from such an opportunity empty handed. I offered the owner what I thought was fair for the 'Sweet Spots', his counter-offer was tempting but still could not stifle "the voices". In the end I balked at the large purchase and just grabbed a "fix" of a handful of 'National Chicle' packs from a freshly opened box.

Most of the cards have now been broken up, dispersed or sorted. However a few of the cards I remember pulling were these four Hall of Famers from the SAME PACK!!! Good times!! 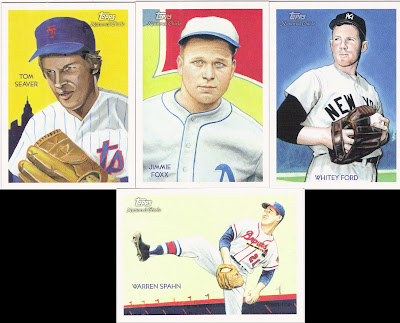 A great card of Adam Wainwright and the St. Louis Archway.

I pulled a National Chicle back of Jair Jurrjens. 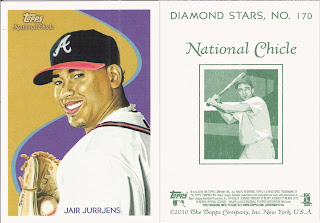 Bunting goodness with Luis Castillo and a Reid Gorecki SP in the style of 1954 Topps. 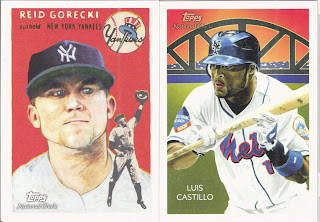 I also pulled a relic card of one Larry Jones, which is now finding a new home in Squidbilly Country.

I kept wanting to go back to the card store and claim the tin of 'Sweet Spots' but "the voices" would not let me and, if nothing else, I NEED to trust "the voices".

When we got home there were a few envelopes welcoming me as I came through the door. Some were trades with other bloggers, and for those I will give them the proper respect and dedicate to them their own post. The other envelope, which I will share now, was the result of some negotiations due to some unfortunate corporate red tape.

Topps has been reaching out to collectors through social networking sites like Facebook and Twitter. A commendable effort and a great step as far as I am concerned. One of the things Topps has been doing on Twitter is daily giveaways. You simply re-Tweet a message and you are entered. I happened to win this 1969 Topps autographed Al Kaline card. Unfortunately, due to certain legalities and restrictions with the giveaways, Canadians were technically ineligible to win. Thankfully, the man who is responsible for the Topps Twitter account, Michael, took it upon himself to make the best of the situation and sort things out as best he could.

The best he could do was this AWESOME card!!!

Thank-you once again to Topps and Michael for not doing what I expected and just saying "Whoops, sorry. Tough luck but those are the rules." Truly classy!

Hopefully soon I will be posting more pics from the Padres/Brewers game we attended and I will definitely be writing up the trades that arrived while I was away as well.

Before I go, I did also want to make mention that I will be working in the next while to expand the dimensions of 'Long Fly Ball To Because......." I have found it necessary to begin searching out a new supplier for my purchases as my LHS will be closing its doors in a few months. As part of this adjustment I want to start offering group breaks through the blog and potentially posting video breaks as well. There will be more to come in the near future once things become a little more concrete. I just wanted to plant the seed right now for those who might consider being a part of something exciting and new.

Thanks for sticking with me during this brief break and I plan on doing a much better job of keeping LFB2B up to date and considerably more interesting.