All of the countries are randomized and assigned a number. I decided to see what would be revealed behind Door #1. 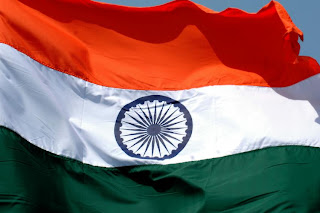 After some researching about who exactly India were sending to the Winter Olympics I am looking forward to rooting on "my team". India's contingent for the games consists of 8 people all together with 3 of those being participating athletes. I will be watching excitedly now to see how Shiva Keshavan does in the Luge, how Tashi Lundup will do in Cross-country Skiing (this is event along with the Biathlon are actually two of my favorite events to watch) and I will be watching for Jamyang Namgyal tearing up the slopes of Whistler in the Alpine Skiing events. 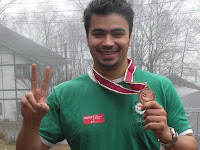 Thanks to JD's for running this contest and introducing a welcomed addition to who I will be rooting for these next few weeks.

On a bit of a down note, while reading about my new team it seems that the two skiers, who are part of the Indian Army, arrived to the games greeted by news that 17 of their colleagues were killed in an avalanche while on manoeuvres.

Also giving me reason to cheer is that India has yet to medal in the Winter Olympics since first competing in 1964. THEY'RE DUE!!!!!!

If you have not already, and provided there still is time and slots available, got to JD's Wild Cardz and enter the contest. Whatever the prizes it will be fun all around!!!