This is the third and final box from my original purchase of Topps T-206. I have some loose packs elsewhere and when I find them, if there is anything interesting, I will be sure to post as well. So far the first two boxes have been superb and my enthusiasm and expectations for this product has been met. However, of course there has to be a "however", this trilogy ends on kind of a THUD rather than a triumphant flourish. As we go on you will surely understand.

We all participate in a hobby that is, more and more everyday, considered "niche". To me that is a polite way of saying that it is a hobby that if the proper circumstances present themselves could be extinct quite suddenly and easily. Perception and reputation rule card collecting and hopefully card companies realise this to some extent. Why do I say this? As you all have read in the past two posts I am completely taken in by this product and had been anticipating it since the first whisper about it surfaced. After braking this third box I have to honestly say, had this been my first box I would have considered this product mediocre at best and quite possibly a fail.

First and foremost, as will always happen with any box break at LFB2B from now on........ 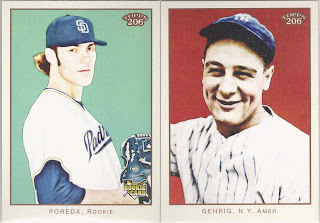 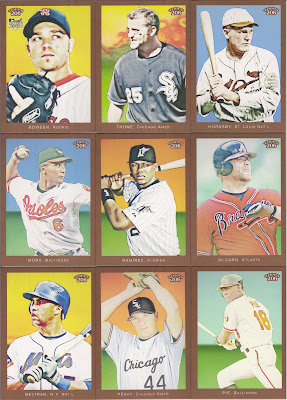 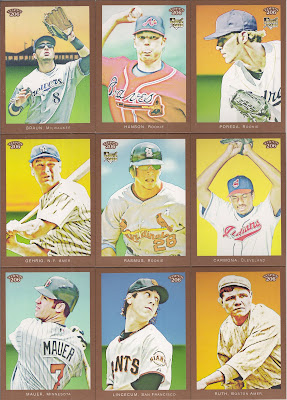 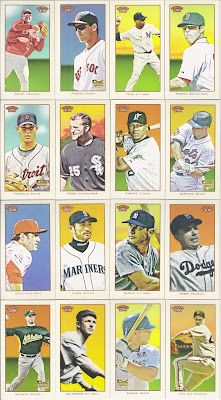 The mini inserts fell as per odds but this was the first bump in the road for me where Topps T-206 is concerned. The two per box Polar Bear backed minis were Mat Gamel and Jorge Posada. The Old Mill backed insert was David Huff of the Cleveland Indians. 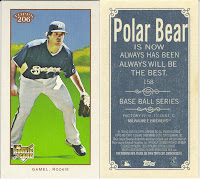 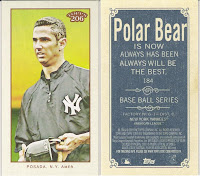 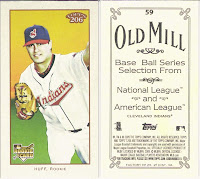 The serial numbered Cycle back mini was a terribly mis-cut card. I can understand Base Card mis-cuts and other cards that are printed in the thousands. However, when a card is of a limited run, in this case 99, you would hope the companies spend a little extra time and effort making sure each card is carefully processed. As a collector, as far as I am concerned, this card is useless. I have no plans of building the set but I am also not going to sell this card or use it as trade with other collectors. Very disappointing. The card itself belongs to Michael Young from Texas and is numbered 22/99. 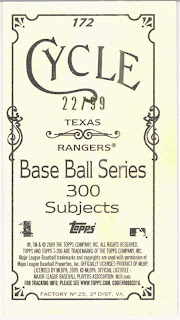 The guaranteed box hits this time around were both framed autographs. I really, really like these for several reasons. The on card auto as far as I am concerned should be the only way to go. The fact that they are framed in a full size card adds to the beauty of the card as well as making storage easier. I will have to take this under serious consideration but this may be a set worth trying to put together. A very daunting challenge which is the bane of any set collector. This time around I pulled autos of James Parr of the Atlanta Braves and Scott Elbert of the Los Angeles Dodgers. 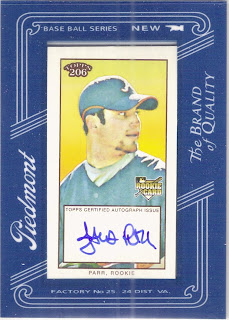 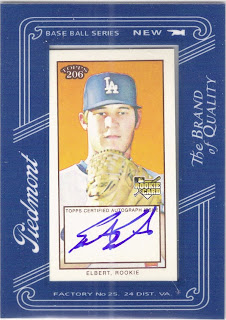 Perhaps the extraordinary luck of the first two boxes raised my hopes beyond proper expectations but this third box left me feeling a bit disappointed on several fronts. There were no extra "hits" in the box, just the guaranteed two. The box hits that did emerge held no "wow" factor to offset that underwhelmed feeling. The other thing that bothered me was the card quality in this box. I previously mentioned the serial numbered mis-cut, but there were also a number of damaged cards that had surface dents or gouges. As well there were what I can only imagine were packaging damages on the cards that looked like roller marks.

As I had stated earlier, this hobby is dependant upon the people already participating in it and the companies that produce cards need to be aware that their reputation for quality is the only thing that will guarantee them customer loyalty. Collectors buy what they perceive is value for their money. Had this been the very first box of Topps T-206 that I had opened I would have been very disappointed and felt that it was just another product that a listless card company was just grinding out to an under appreciated public.

After three boxes I am still excited about this product but wary of what lies on the horizon for the next box I buy. Yes, there will be a next box, maybe even two. Sadly though, there is still a bit of cynicism lingering.

Thanks for following these three box breaks and I hope you enjoyed them as much as I did. I will be posting a traders list and a want list shortly. I am also looking to trade for any of the Piedmont minis as I will be building the set. Let's talk trades!!!!