The weekend finally arrived, although it was not that bad having the work week split into two 2-day segments, it was still welcomed. As usual I stopped by my "home base" card shop to see what I could find. It turns out there was a customer earlier in the week who had purchased and cracked a box of 2009 Upper Deck SP Legendary Cuts , kept only the inserts and left the singles behind. This kind of collecting I fail to understand. However, with the opportunity it presented me I will not question it that deeply. There is no way I would purchase packs of this stuff, let alone a box. However, to Mr.X. prospector/collector I say thanks because I got these from you. (in a roundabout way)

Firstly after going through the Upper Deck website and finding the checklist I was actually a bit intrigued by this set. It appears to me to be the "Coles Notes" of the A&G set, sorry for the Canadian reference there but I think the American version of that statement would be "Cliffs Notes", I do believe.

Hey, here's a tangent, have there ever been A&G Cards dedicated to either Cliff Hillegass or Jack and Carl Cole? I think Topps needs to get on this right away, or at least some of the more talented card designers/bloggers I have seen. Beardy and PunkRockPaint , I'm looking at you two!

After going through the checklist I was a bit mystified at the general lack of Toronto Blue Jays cards in this set. I understand that with such a small card count that only the higher calibre players can be included in the set. However, do you mean to tell me that this was the only Toronto Blue Jay that made the cut? 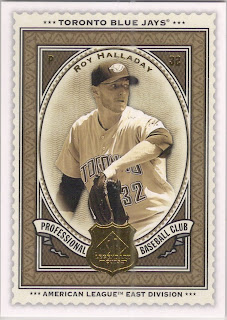 Where is Vernon Wells? Where is B.J. Ryan? Even Alex Rios arguably deserves a card. I'm not saying the Blue Jays are house-hold names but really, they are not the Indians either!!
There is one other Blue Jay in the set but a short-printed ex-Jay does not truly count here. Joe Carter is card #144 and if anyone has Joe and wants to send him home to Canada, please feel free.

By contrast there are 8 Chicago Cubs in this set and Mr.X. was gracious enough to leave 5 of them for me. Alfonso Soriano, Aramis Ramirez, Carlos Zambrano, Rich Harden (for some reason he is listed as an Oakland A in the checklist) and Derrek Lee. 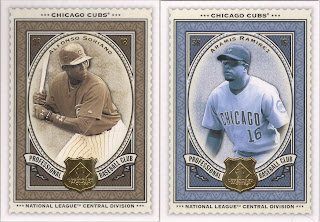 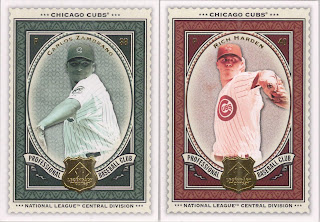 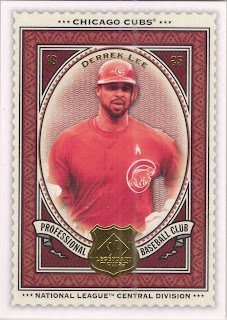 Mr.X. was also fortunate enough to pull the only card in the set that goes straight into my sub-set collection of players bunting, Curtis Granderson. 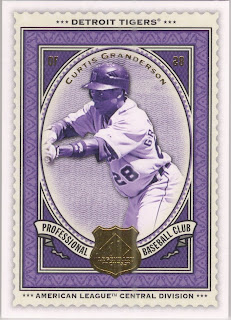 I also grabbed three other cards from Mr.X's discards to send out to some other bloggers as kind of a "just because" thing. I have been incredibly impressed with the continued generosity I have seen among everyone that it is kind of infectious and it makes me want to do the same. I figure they may even already have these cards due to said generosity, but, it is still a great opportunity to just introduce myself and just say "Hi".

All in all, I like the look of these cards and as I was scanning them I saw just how great they look in binder pages. I am thinking of returning to the card shop and maybe grabbing the rest of Mr.X's stuff as a starter set and collecting the base set. There were a few of the non-baseball short-printed cards that caught my eye that I will have to put on a wish list. At the end of this entry I will post a needed list and add one to my Want Lists on the side bar of my blog as well.

What are your thoughts on the SP Legendary Cuts set? It is too bad that designs like this cannot bet utilized in a more mainstream set. A great deal of what I collect is based on how a card looks as well as the player list. The thickness of these cards and the design along with the chase hits are what make these a premium card but thanks to Mr.X. I can afford to have these in my collection now.