What I Collect - Part II

In my previous post I had shown some of the newly acquired personal sub-set cards and I continue to scan the others for future posts. In an effort to further introduce myself and my collection I have decided to share with you some of the other non-set/single items I have tended to over the years. One of the ones that I started right away, even without thinking really, was unopened wax packs. When I began card collecting I was truly a Topps supporter, very little else interested me and I was a bit of a "product loyalist", almost to a fault. Every year when the new releases came out I always tucked away the VERY first pack purchased, thus satisfying the OCD part of my brain.

Here is my current Topps collection. 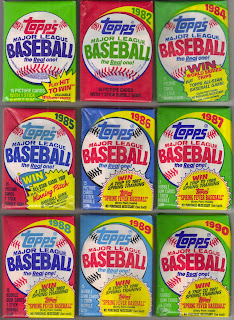 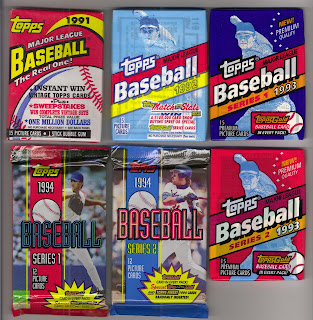 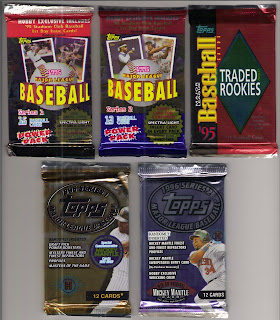 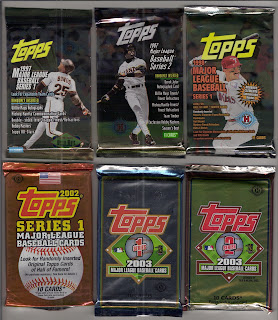 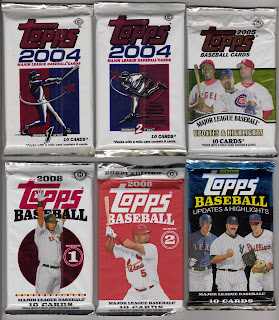 As the years passed the collection began to grow into something that I really began appreciating and valuing. Eventually it carried itself over and beyond just Topps packs as the releases in the hobby began to grow. It was around this time that I started to impulsively buy packs from sets I was not even considering collecting. I bought packs just to collect packs. Usually it was oddball or individual releases more than just other card companies. Some were event related like the Petro-Canada (a government run gas station) All Star Set. Some were from "special" sets while others were first year releases. Still others were food issued. 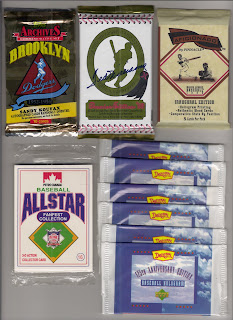 *the Denny's wrappers are easily seen through so I know they are Cal Eldred, Albert (don't call me Joey) Belle, Cecil Fielder, Mike Piazza, Andres Galarraga and Gary Sheffield

I even purchased a pack of 1981 Fleer simple because it had a Jeff Reardon rookie card on the back and Jeff Reardon actually mattered in the hobby at the time.

Obviously the Topps collection has a long way to go before it can even be considered to be worthy of bragging about and I intend to bring it to such a level in the future. I also wanted to send a special "Thanks" to Topps for introducing the variant pack this year, way to go. I still keep my eyes peeled at shows for interesting packs and more than likely always will.

I will be posting in the near future a particular pack that I have found that I am trying to decide if I should open, keep or sell. Once I get it scanned I will post. Maybe you, respected reader, can help me come to some sort of decision. As well, if anyone out there has an unopened pack of 1983 Topps that you would be willing to trade I have an extra pack of 1982 Topps at the ready.

I have not decided what collection to post next so, until then.