As you may or may not be aware the demand for the 2009 Topps Heritage product, and for that matter 2009 Topps product in general, is seemingly uncharacteristically high this year. As a result many of the Hobby Shop dealers I have been speaking to were caught in a rather unfortunate situation. Knowing that due to several factors, the most important being that Canada is first and foremost a "hockey market", most dealers always order light when it comes to the early initial release of Baseball product. Most rationalize this by saying "if the demand is there they can simply call up their supplier and get what they need." However, this year it has been a bit of a different story.

This leads to what is ultimately the point of this post. I needed to purchase some computer related items for some work I am doing around the house and the only place I could get it was an hour and a half away. I figured it would be as good an opportunity as any to scout out some card stores I would not normally frequent and see if I could find some of the elusive Topps Heritage. As luck would have it I entered into a store and sitting on the shelf amongst all the owners other product were two magnificently sealed hobby boxes of 2009 Heritage.

I could not believe my quest was finally over.

I had finally found what I was looking for and my hand immediately flew to my wallet. Somewhere along the line my brain kicked in and I asked the obvious question....."How much for the Heritage?"

"One-forty.", was the straight-faced answer.

I explained to the seller that I understand that it was a sought after product and that it was indeed hard to find but c'mon, seriously, a hundred and forty bucks?? After further conversation he ended up telling me that what is happening is that even the suppliers were caught "short-handed", so to speak, and the increase in popularity has driven up the price. Now, I can understand this kind of thinking with older product or even product from a couple years back that may have been produced in limited quantities. However, to jack up the price of current product just because demand is there seems to me to be wrong. Retail stores are not allowed to do this so why should Hobby stores? I realise this kind of thing has been and always will be going on, however, in my mind it still does not make it right.

So, suffice it to say, I left the store without any Heritage but all was not lost. I did manage to find a couple singles that went towards my Cubs and Jason Bay collection. 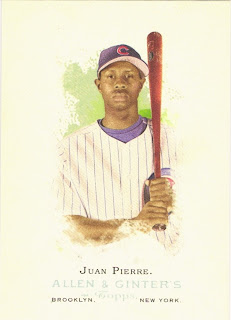 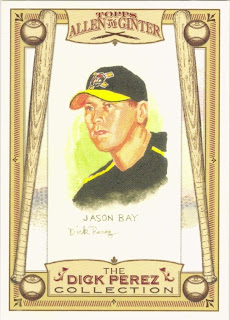 Not being one who is easily discouraged I continue the search for the elusive Topps Heritage. Someday patience will pay off, and besides, there is still the "Big Show" coming up in a little over two weeks. Maybe luck will be on my side there.